10 ways to save money in Beijing

10 ways to save money in Beijing

While living in China is certainly cheaper than living in European countries and the United States, that might not be so in the capital. Beijing’s is China’s most expensive city, and many expats coming over with ambitions to save money might leave disappointed.

However, it is definitely possible to have a decent, more “local” life and save a lot of money without necessarily cutting down on comfort, travelling and entertainment. Just follow  a few tips!

1. Show your bargaining skills: Chinese vendors will assume that, because you are a foreigner, you have tons of cash. And even a Chinese friend once took their side, wisely explaining me, “You are European, so you have more, and it’s right that you pay more.” With some Chinese vendors, shops, and markets this can mean a 400% mark up. Bargaining is part of Chinese culture. If you don’t have Chinese friends around to bail you out, consider learning a few Chinese words that can help you lower the price, as well as pretending to walk away as a negotiation tactic. Chinese shops want to sell quickly, you have the leverage.

2. Beware of coffee, food, beer, and tea ceremony scams in sightseeing places and nightlife areas. Girls or students lure you into bars and restaurants they have an agreement with, invite their friends and pile up mountains of expensive dishes. In the end, guess who will be left with a bill that makes your heart sink and your eyes pop? 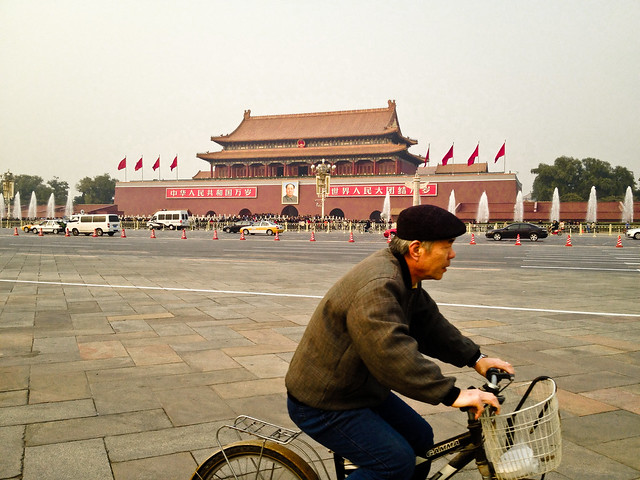 A bike in Beijing. The city is full of bike paths; you just need to get used to the hectic traffic

3. Get on Your Bike: Bikes can be very cheap in Beijing. You obviously can’t travel all the city’s long distances (e.g. only madmen would bike from Sanlitun to the Summer Palace), but bikes are a legitimate solution to avoid public transport at rush hour and the lack of taxis in the night. A bike will prove a great investment after a couple nights out. Nevertheless, beware of bike theft, especially if you plan to buy an expensive one!

4. Eat with others: Food and restaurants are really cheap in Beijing compared to Western countries, and you can eat out at the restaurant around the corner for as little as 30RMB. However, consider dining out in medium sized groups: it will make the whole meal more affordable.

5. Avoid western food; there is no better way to save money in Beijing than adjusting to a local diet, steering clear of typically Western products. Buy tea instead of coffee and rice instead of pasta. With a little help from Chinese friends or TWOC recipes, you will be fine. Avoid cereal, biscuits, milk and imported wine if you want to save money – which are often under par anyway.

6. Don’t tip, or, at least you don’t have to. If you’re eating at the type of place that wants tips, you’re already spending too much.

7. Take your student card with you. It’s amazing how many discount opportunities you miss without it. Sightseeing places have discounts for students, and even public transportation and food can prove cheaper, especially if you study at one of Beijing’s universities.

8. Avoid pedicabs and 黑车 (hēichē, black cab). They will prove a nightmarish adventure that will cost you much more than a regular cab. Never, ever trust them. If you are truly desperate, make sure to haggle.

9. Take advantage of all the discounts: The Beijing nightlife scene is filled with umpteen happy hours and other promotions like ladies’ nights, vouchers, coupons, and discounts.  The internet is packed with blogs that will help you find your place for the night. Don’t save money on alcohol though, you’ll pay for every drop of that 10RMB faux liquor cocktail in the morning.

10. Constantly check the expats blogs such as the Beijinger, Expatarrivals (as well as The World of Chinese, of course) and the like – they will be your compass in the hazy Beijing Jungle. But, of course, the best guides are Beijingers themselves, so try and mix it up with them as much as possible!