When did the Chinese start removing footwear indoors?

ABC sitcom Fresh off the Boat, credited with teaching mainstream America many Chinese cultural norms, contains an episode in which Chinese-American mother Jessica Huang acts touched to see her son, Eddie, bringing home a “Chinese girlfriend” who took off her shoes before entering their home. But how did this custom start, and is it still prevalent among Chinese today?

Hygiene is the most obvious reason for removing outdoor shoes. Entering in bare feet or house slippers keeps out dirt and bacteria from the home. New York Times magazine editor Christine Haughney, in her article “Kicking up a Little Dirt in a Debate Over Shoes,” also suggests that removing shoes is respectful to the host because a clean house is a sign of politeness in East Asia (including China, Korea, and Japan).

However, in “The Chinese did not always take their shoes off at home,” Inkstone editor Wee Kek Koon writes that the shoe-removal custom has seen many iterations throughout Chinese history. Originally, Chinese people sat on the floor inside homes and businesses (as the Japanese still often do today), so removing shoes was necessary to keep the floor clean.

In the Zhou dynasty (1046-256 BCE), it was also required for commoners to remove their shoes, and even their socks, before meeting their lord. Afterward, they would surreptitiously put footwear back on, making sure they were not seen doing so by their social superiors. During the Qin and Han dynasties (221 BCE – 220 CE), effigies and wall murals show that people still sat on the floor. If a host wanted to show humility, he might go outside to greet his guests barefoot, holding his shoes in his hands.

However, after the fall of the Han dynasty in 220 CE, China saw influxes of invaders from the northern and western frontier regions, who brought with them a flow of foreign furniture. Higher tables and chairs enabled people to stop sitting on the floor, and they no longer removed their shoes unless they were going to bed.

It’s not clear when and why the Chinese started removing their shoes again, but Wee dates the custom to sometime in the 20th century. Even today, shoe-removal is not practiced in all regions of China: Rural homes, for instance, may have dirt or concrete floors on the ground level, making shoes necessary unless one is going to the living quarters upstairs. 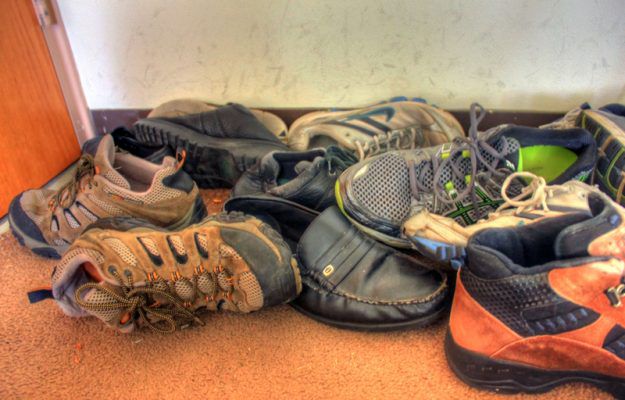 While shoe-removal keeps the home clean, some Chinese wonder whether the practice is altogether hygenic for the feet. “My family and I wear slippers at home,” Wang Jing, a 22-year old resident of Guangdong, tells TWOC. “It can keep our feet clean at home, and it is cold to step on the floor with bare feet, especially in winter.” Chinese wholesalers have even been importing house slippers to sell in some African countries, sensing a market abroad for these cheap and commonplace compromises between traditional and practicality.

Thus, it is not accurate to generalize that all Chinese people remove their shoes indoors, nor that it’s an ancient tradition. If in doubt, next time you’re invited to a Chinese home, just ask the host what to do.