Which provinces put on the most pressure to get hitched?

Spring Festival is just around the corner. China’s single men and women are growing more and more anxious over their family get-togethers, where parents and relatives engage in the age-old sport of bullying you into getting married. But, which province suffers the most?

Well, it turns out Jiangxi province has this poisonous honor, according to the 2016 Survey of Marital Views of Chinese Men and Women, released by Jiayuan.com, one of China’s biggest matchmaking websites. While nearly 60 percent of single men and over half single women surveyed felt the pressure from their family, 63 percent of both in Jiangxi said they have been stressed due to the cuihun (催婚, being pressured to get married). 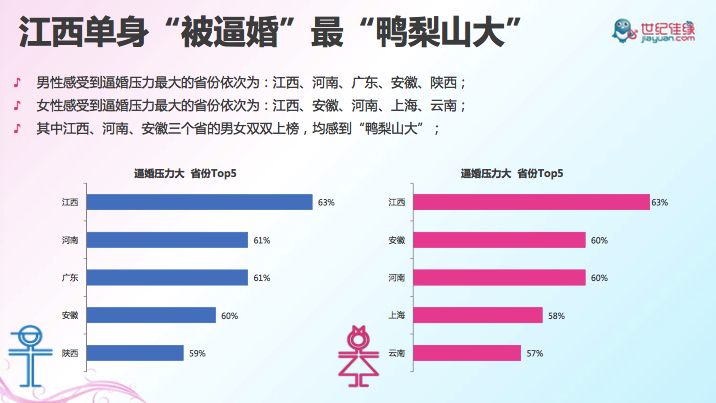 The cost related to marriage is another topic in this survey, in particular the “dowry money” the groom has to pay to the bride’s family. The females surveyed agreed that on average 69,416 RMB is a fair minimum price, and the most demanding brides are from east China, who request 80,569 RMB; brides from northwest China only expect 54,539 RMB. 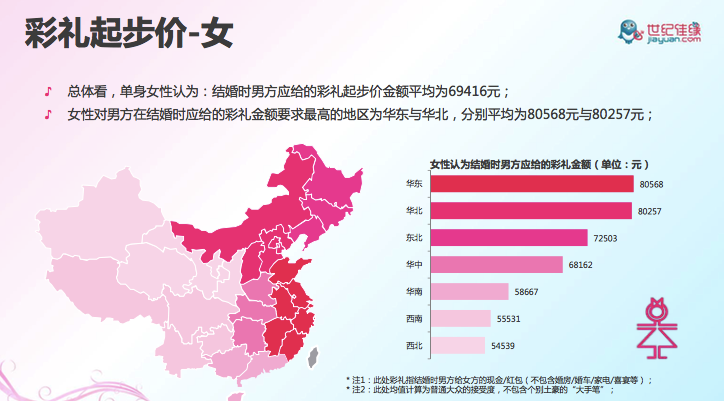 When it comes to other expenses such as apartments and cars, over half of women believe it should be their partners’ duty. However, they are willing to share the cost of appliances and apartment decorations.

Apart from the economic reasons that keep China’s men and women apart, appearance turns out to be a big factor. Only six percent of men and five percent of women said they do not care about their partner’s appearance. For men, the most unacceptable look for their women was having heavy makeup and tattoos. Women, on the other hand, hate when men reveal the band of their underwear and dye their hair. For both genders, public manners are important, as both deplore spitting and temper tantrums, being rude to waitstaff and the seemingly ubiquitous problems of checking one’s phone nonstop.

Pertaining to living habits, for men, the most unacceptable traits of women are disrespect of the elderly and bad personal hygiene. For women, it’s when their partners make empty promises.

Last but not least, the biggest mismatch perhaps lies in their personalities, or at least, the perception of them. For women, the most irritating trait their male partners can have is being an “iron rooster,” i.e. a stingy person. For men, it when their female partners are gold-diggers.

Can you feel the Spring Festival love in the air?