Photo Credit: Still from “I Belonged to You” via Douban

I Belonged to You was released two days before October 1, China’s National Day—a day that seeks to unify the nation—and one can only hope that the film in question is not in any way representative of the country or its film industry. The picture is such a saccharine mess that it is hard to decide what is more depressing: that it was made in the first place or that it did so well at the box office. You should be careful what you wish for, but this is a film that makes you wish that the Chinese censors were so much tougher than they actually are, and that instead of concerning themselves with the relatively mundane issues of political sensitivity and vulgarity, they could up their game and work towards a bit of quality control. The plot, though this unfairly suggests the film has a clear sense of direction, centers around an egotistical talk show DJ, Chen Mo, played by Chinese pretty boy Deng Chao. Early in the film, in the first of its poorly executed slapstick scenes, Chen is jilted by his lover and co-host Xiaorong (Du Juan) live on air, causing Chen to be morose for the entire film…well, at least until Xiaorong’s replacement turns up: a cute intern named “Birdie,” who Chen inexpertly flirts with throughout the film. So inexpertly, in fact, that at one point he accidently hits her in the face, cue more dodgy slapstick. This under-heated love triangle is sufficiently weak and ineffectual—Deng has an annoying charm, but it is wasted here—that a further two love stories are thrown into the mix. Both involve Chen’s best buddies, and both are doomed to failure.

Chen’s best friend, Chubby, performs the well-known archetype, the funny fat guy, though he is largely more pathetic than humorous. He is jilted days before he is set to get married and, oddly, spends the rest of the film in a war zone selling street food. Not just any street food either, but his former fiancée’s favorite snacks. One supposes this is a comic look at redemption, penance, and atonement, but it leaves you wondering exactly what the writer, best-selling novelist Zhang Jiajia, and director Zhang Yibai were smoking when they decided to bring this outré number to the screen.

The final piece of the romantic triptych involves an impossibly cute Chinese policewoman and her geeky bowtie-wearing boyfriend. Geeky boyfriend wins over the more practical and streetwise policewoman by his sheer desire to know everything about the world. As he tells her early on, when she asks if she can trust him: “I’m too busy exploring the truth about the universe. I don’t have time for lying.” So, it is a sad moment when he, inexplicably, gets stabbed to death by a gang of street thugs about two-thirds of the way through the film in a scene utterly out of keeping with the gentle rom-com the picture constantly tries (and fails) to be. Still, it shows that we can lose love even when we are least expecting it. All is not lost, however, for before he dies, geeky boyfriend programs his voice into the sat-nav on his girlfriend’s motorbike, so at least she can listen to him whenever she is out for a spin. 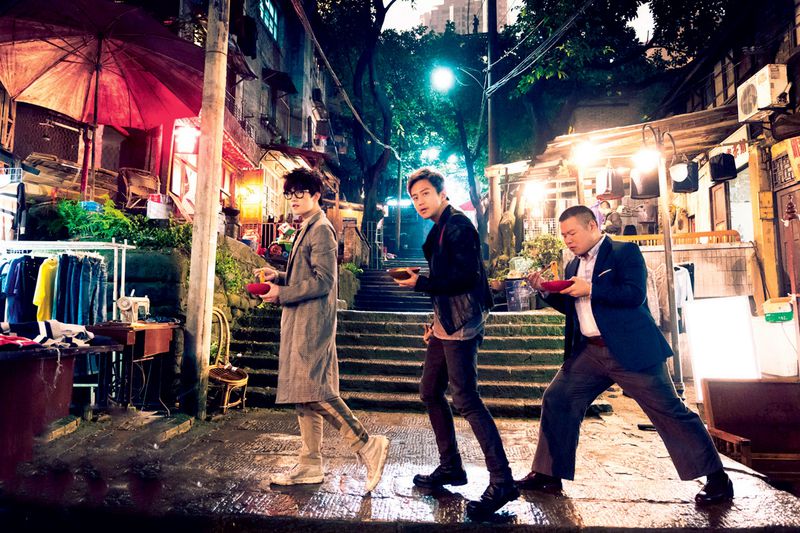 Mao Shisan (Yang Yang), Chen Mo (Deng Chao) and Zhutou (Yue Yunpeng) chat about their relationship issues over street snacks (Still from ”I Belonged to You” via Douban)

There is a genre of films much loved because they are “so bad they are good” and often become highly recommended as such. But even by this metric the film fails, for while it is without doubt very poor, it is not made completely without skill. The director of photography has a more than competent understanding of light and color. Chinese cities are prettified to good effect, particularly at night, and there are elegant, panoramic mountain shots that wouldn’t look out of place in an alpine travel advert. If you are into syrupy love ballads, the soundtrack contains a couple of good ones, too.

Most films have a message of some sort, but through accident or design, it can sometimes be difficult to ascertain exactly what they are trying to say. I Belonged to You seems to be trying to say something about love. As the film tells us in one of its many pseudo-poetic moments: “Some love happens naturally. Some disappears without a cause. Though you can see it happening, there’s nothing you can do.” And it is this fleeting though actually quite meaningful point that the film tries to hit home, albeit in a somewhat disordered, ramshackle fashion. It is not for this reviewer to tell anyone if they should watch this absurd film. So instead he will suggest watching it with a few stiff drinks beforehand, in the slight hope that it might make just a little more sense.

I Belonged to You is a story from our issue, “Wildest Fantasy.” To read the entire issue, become a subscriber and receive the full magazine. Alternatively, you can purchase the digital version from the App Store.