Far be it for us to accuse anyone of coattails-riding, but if Microsoft wanted to set Chinese media abuzz with Sunlight Without Glass Windows (《阳光失了玻璃窗》), an anthology of verses by its poetry-writing AI “Xiaoice” (小冰) it was right to time the book’s release for the week before the much hyped Go tournament featuring Google’s AlphaGo took place in Zhejiang the week of May 26.

After the book quickly took the number 1 bestseller spot on Amazon.cn after its May 19 release (one wonders, who gets the royalties?), Chinese media has highlighted the fact that AI has mastered three out of the “eight classical accomplishments of the literati” in ancient China (as researchers at the University of Hong Kong have also been developing a calligraphy-writing robot): zither, chess, calligraphy, painting, poetry, wine-appreciation, flower-appreciation, and tea ceremony.

Fortunately for purists of the ancient arts, in the case of AIs that write poetry, as opposed to those that play Go, there is room to debate the superiority of the human touch. Last year after AlphaGo’s first tournament in China, Wang Qixin, a researcher behind Tsinghua University’s own poetry robot “Weiwei” (薇薇), told media (link in Chinese) that “AlphaGo was made to compete with humans [in a game], whereas Weiwei’s focus is on creativity. They cannot be compared.”

He also pointed out that the engineering behind poetry-writing AI relatively simple, and in fact, the basic rules of ancient Chinese poetry lend themselves quite easily to algorithm. During the Tang Dynasty, seen as the “golden age” of Chinese poetry, classical poetry was codified into two types of meters (“five character” and “seven character”), mandatory rhyming, and symmetrical tone patterns from line to line.

In effect, it’s not difficult for anyone, child or machine, to produce a passable imitation of classical verse by following the rules, though there’s no guarantee of quality: Reportedly, when the developers asked poets to evaluate Weiwei’s output, the feedback ranged from “lacking creativity” and “[good] for a young person learning poetry.”

Xiaoice, on the other hand, had the somewhat more difficult task of composing modern verse, based on styles originating from the “vernacular language movement” of the 1920s. It’s defined by a more conversational style of expression and the lack of clear guidelines regulating rhyme schemes, tones, length, and form, which makes it either easier or harder to write than classical poetry depending who you ask. In the AI’s case, it seemed to have made up for the absence of clear rules with more hours of training any human can accomplish in a lifetime: according to its developers, Xiaoice studied the works of 519 poets since the 1920s and underwent more than 10,000 rounds of practice.

Xiaoice started life as Microsoft’s chatbot for the Chinese market. It’s eventually supposed to feature in an app where it can complete verses based on photos the users ask it recognize—this was, supposedly, how it came up with all the verses in Sunlight Without Glass Windows. While the open-ended nature of modern verse makes it difficult for form a reader consensus on the merit of its work, during the app’s testing phase, the AI has been attracting attention for its “creative” interpretation of content in the photos—milk foam in a cup of milk tea as a cloud, a mobile phone as a towel.

But as Xiaoice’s critics point out, the one thing distinguishing the modern free verse from a word salad is something that AI could never achieve. “Real poetry is spiritual,” renowned modern poet Yu Jian has commented online. Tianjin literary scholar Tan Ruwei told his local daily, Tianjin Daily (in Chinese), “In my view there are four important elements to creating poetry: powerful emotion, the outburst of emotion, a certain sense of meter, and succinct writing.” As the AI’s output does not originate from feeling, the paper comments, it doesn’t fulfill the first two criteria, thus isn’t poetry but rather “a word game.”

To other media, what Xiaoice’s hijinks really provide is a wake-up call to the public. Where once poetry-writing was a common past-time for all educated Chinese—it was customary, for example, for a person to dash off a few lines in honor of their host before a meal, or versify upon the interesting botany in their garden—the craft has since been relegated to novelty. “We have to just smile, accept this as a warning, and try harder,” intoned a commentary that appeared in Netease’s tech column (in Chinese).

Here’s a translation of a verse by Xiaoice during its testing phase based on the following photo, in case you wanted to judge for yourself (for an alternative translation by sinologist Victor Mair, go here—the grammatical structure of these poems makes it so that they can be interpreted multiple ways): 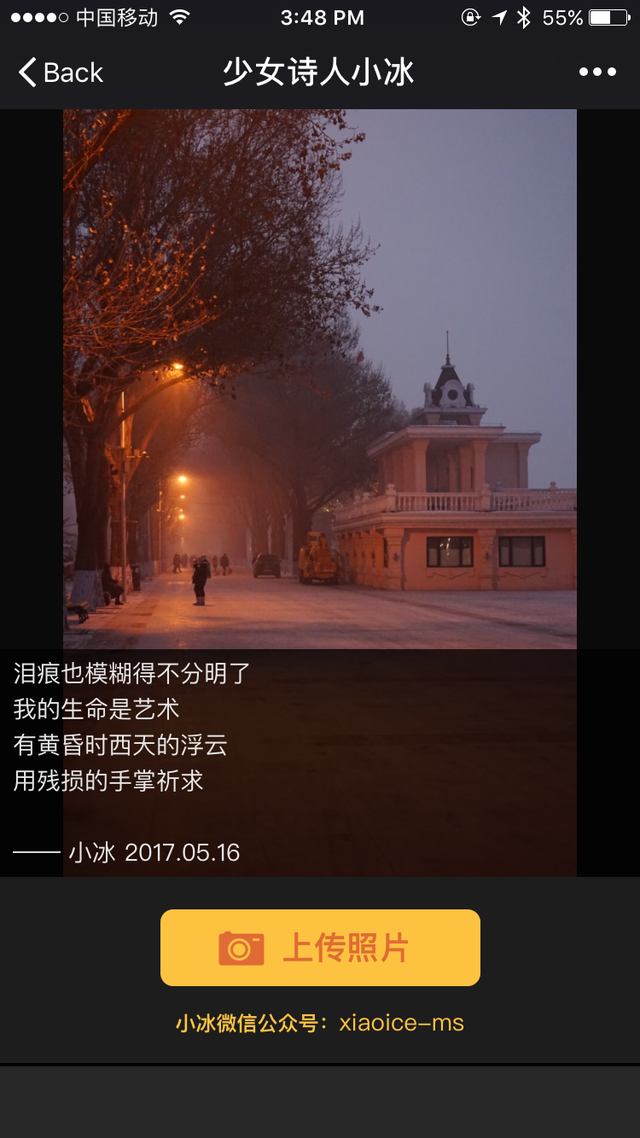 The tearstains are too blurred to see

My life is art

There’s a floating cloud in the western sky at dusk