Based on their stage play of the same name, Zhou Shen and Liu Lu’s no-frills hit Mr. Donkey (《驴得水》) is not just a smoldering critique of corruption within modern society. It may represent a precedent for homegrown comedies to match, and in some cases outstrip, their Hollywood counterparts.

While Hollywood hits like Logan, Arrival, and Resident Evil have dominated the Chinese box office this year—nine of the 10 top-grossing hits of 2017 so far have been Hollywood productions—the film market has undergone several changes over the past few years. These have included the sleeper success of nonstate-backed Chinese films such as Lost in Thailand (《泰囧》, 2013) and The Mermaid (《美人鱼》, 2016), which raked in 208 million USD and 553 million USD respectively, and gave hopes to the country’s stagnating film industry (The Mermaid, Stephen Chow’s environmentalist comedy epic, still holds the number-one gross earnings spot, above Furious 7).

Enter Zhou and Liu’s Mr. Donkey, a low-budget look into the human and emotional roots of corruption that quickly exploded into the market, earning rave reviews from critics and audiences alike. The film’s dark humor, punchy delivery, and witty script quickly made it last year’s highest-rated movie on China’s IMBD equivalent Douban, garnering an impressive 8.3 out of 10. Its success has prompted a revival of the original play, most recently in Beijing in April, as well as interest in the commercial possibilities of independent film. 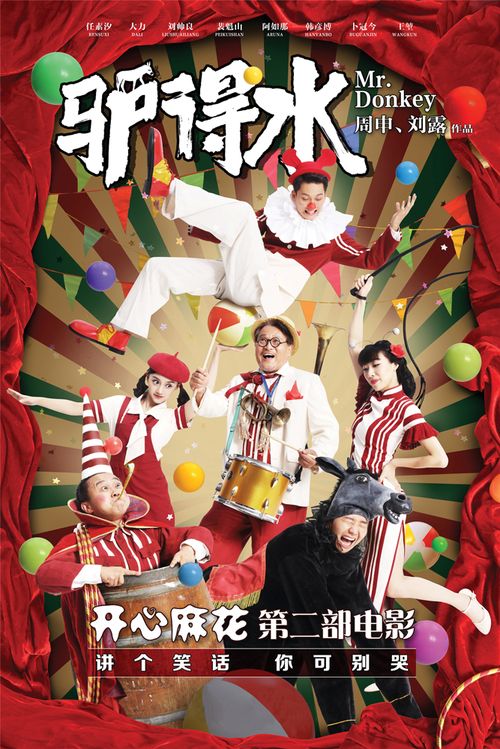 Movie poster of “Mr.Donkey” via douban

Recently, the greatest upsets in the industry have not come from massive productions going head-to-head, but low budget New Wave directors going gold: the serial killer thriller Black Coal, Thin Ice (《白日烟火》, 2014) garnered both awards (including a Golden Bear) and commercial success internationally and at home, while Jia Zhangke’s A Touch of Sin (《天注定》, 2013) was widely admired in China, despite never being approved for domestic box-office consumption. Meanwhile Zhang Yimou’s sci-fi fantasy opera The Great Wall (《长城》), replete with 3D visuals and a ponytailed Matt Damon, was so widely panned that People’s Daily claimed that reviewers’ negative criticisms were causing “serious harm to the Chinese film environment.”

Initially written for film, directors Zhou and Liu were found to adapt the script for Mr. Donkey for the stage due to lack of money, then turned it back into a screenplay after a successful theatrical run. The film is set in 1942 in a remote rural village in China. There, a school administration team is struggling to find funding, as their school is defunct and bereft of students.

In the first act, they find a potential saving grace: by naming the titular pack beast, which brings them water daily, as an English teacher, the protagonists are able to procure additional funding. But they are inevitably drawn, too, into a web of lies and deceit. The farce thickens when a government administrator decides to pay a visit, forcing the teachers to see their improvised plan (and own foibles) to the bitter end: One teacher has digestion problems, another is hot-tempered, the dean is trying to raise a daughter, while their solution is dress up an illiterate local coppersmith—who can speak Mongolian—to play the “English teacher.”

The second act sees the unraveling of these characters and their lives, and the plot quickly sheds its comedic nature, as each character becomes a study of identity and greed under duress. The government official, too, has his own bad habits, in this case “the optimal allocation of resources,” namely taking backhanders.

While classified as a comedy, the movie is a not-so-subtle look at how rational acts of self-interest can quickly become absurd, especially when looking at how the film portrays government and modern society. The directors are able to get away with such scathing critiques of greed and corruption by presenting its present-day commentary in a historical setting, in this case the Republic of China.

Regulations in the Chinese film market have limited foreign imports in order to boost Chinese films’ rankings. But the fact that smaller productions that eschew the cookie-cutter mainstream culture are slugging it out with American and Chinese films for the top-earner spot is a testament to the strength and progress of China’s domestic talents.

While Mr. Donkey is an independent film, its message has resonated with such magnitude it has shot to instant fame. It is a relevant and timely commentary on the concerns of the everyman and woman, especially regarding corruption and the individual’s place within the rule of law. The conversation it started should not be ignored.

After helping to convince the inspector of his English teaching bona fides, the coppersmith feels slighted and betrayed by the scheming teachers. He returns to give a speech about the value of education and dignity

Mr. Donkey is a story from our issue, “Wheel Life China.” To read the entire issue, become a subscriber and receive the full magazine. Alternatively, you can purchase the digital version from the App Store.