Uprising of the Chinese Ping-Pong Team

Uprising of the Chinese Ping-Pong Team

In what ways is a former ping-pong champion-turned-coach-turned-administrator like tragic 12th-century military general Yue Fei? Netizens believe they’re both victims of power play.

The story of Yue Fei, at first glance, has little in common with that of Liu Guoliang, who until last week had been the head coach of China’s national men’s ping-pong team. The Song Dynasty general waged many impressive campaigns to drive back invaders from the north, but was removed from his position and executed for treason due to the connivance of of his political rivals, most infamously Qin Hui, the corrupt minister.

Liu was a former Grand Slam champion and one of the most successful players and coaches in Chinese ping-pong history. On Tuesday, Xinhua news agency reported that he had been removed from his top coaching job to take up the position of vice president of Chinese Table Tennis Association. And the story might have ended there but for three of his top players, who decided to take matters into their own hands.

Last Friday, at the second round singles matches at the China Open in Chengdu, the top three men’s ping-pong players in the world—Ma Long, Fan Zhendong, and Xu Xin—failed to show up for their match, according to the International Table Tennis Federation. The fourth member of the men’s team, Zhang Jike, had been forced out of the competition on Thursday due to a hip injury.

The ITTF reported that it was  “not clear” why the three players failed to appear for their matches, but the crowd “consistently shouted the name of Liu Guoliang,” who had been Team China’s head coach until Tuesday.

The mystery was soon cleared up after the three players wrote identical posts on their Weibo accounts later that day, reading, “At this moment we are not in the mood to play anymore, because we miss you, Liu Guoliang.” Men’s team coaches Qin Zhijian and Ma Lin (former ping-pong world champion and Olympic champion, respectively) also posted the same message. 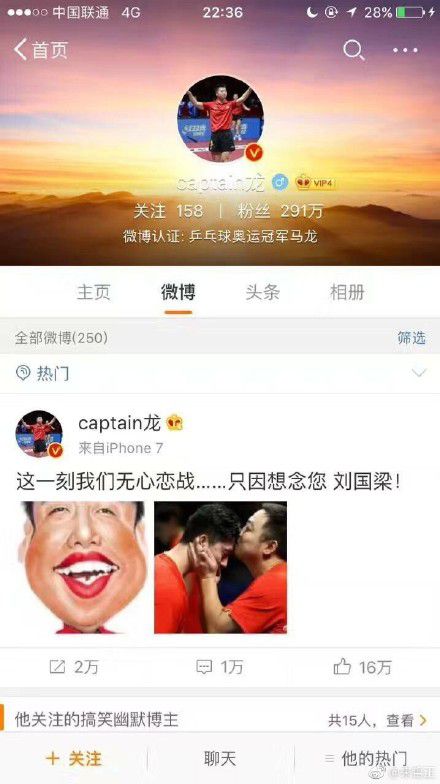 Liu’s removal came at the heel of another shake-up in the ping-pong world: Last month, Kong Linghui, head of the national women’s ping-pong team and Liu’s close friend, was removed from her position following a gambling debt scandal.

These upheavals have sent social media into overdrive, with the majority of the netizens taking the side of the players and believing they are victims of politics among the higher governing bodies. Yue’s story became the perfect vehicle for expressing their outrage. “When Yue’s army was unbeatable, Qin Hui used 12 gold medals (used as a token of authority) to withdraw Yue, and then the army no longer had the desire to fight,” wrote a Weibo account named 冯瑞豪啊, under the comically long hashtag “Liu Guoling no longer serves as head coach of the national ping-pong team.”

But as in any good story of ancient intrigue, the other side struck back. On Saturday night, the Chinese Table Tennis Association released a statement that it felt “deeply shocked and sad and will reflect on what had happened over this incident.” The International Table Tennis Federation also said that it was “very disappointed that the three best players in the world have forfeited their matches at such a big event.”

The denouement came on Sunday, when the three members who pulled out of match all posted the official apology letter from the Chinese national table tennis team on their personal Weibo accounts. Their coaches, Qin and Ma, did the same. The letter states that the players acted on impulse and because they did not understand the managerial reforms taking place in the team. “The incident exposed deep-rooted management problems within the team and we felt remorseful and heart-broken,” the letter read.

At the time of writing, the waters seemed to have calmed. Friday’s incident and Liu’s removal are no longer trending search on Weibo (whether or not with official assistance) and there is no further news of protest, apology, or penalty dealt to the players. But the incident still has people concerned, and revealed many ping-pong fans’ feelings about the management of their sport. “It’s said that in ping-pong, only Chinese people can defeat Chinese people; we can now interpret this statement in another way,” many fans have repeated on social media.