Welcome back one and all to the Viral Week. To kick off the Dog Days of Summer, coming up on today’s issue, we bring you what you shouldn’t do during the Chinese national anthem, how Beijing and Shanghai rank in terms of LGBT issues, a very shellfish proposal, and propaganda trailers at the cinema. But first…

A woman, who may have been attempting to garner sponsorship from a health company, had to stop her live broadcast to go to the hospital after experiencing unexpected sensations.

The 26-year-old, surnamed Zhang, had prepared for her live-streaming session by bringing two waxy leaves that she told viewers were aloe vera, a plant that can provide health benefits when eaten raw.

However, instead of simply consuming the inner gel (which is what is normally done), she decided to start by chewing through the green outer layer. Soon, Zhang went from “this is great” to “it’s really bitter” as her mouth started to go numb and throat caught imaginary fire.

It was there that she ended the stream and checked herself into the local hospital.

Doctors found her with rashes and blisters, and they were forced to pump her stomach to preserve Zhang’s life. It turns out that the leaves that she ate were not aloe vera like she claimed, but instead were agave americana (American aloe, unrelated to actual aloe), a plant native to Mexico known to contain many toxic substances and for making tequila.

Zhang is now reported to be in stable conditions and without any sponsorship offers.

A couple of weeks ago, new legislation was drafted that aims to standardize the Chinese national anthem, March of the Volunteers.

On top of making sure that the correct version is played, this new law will prohibit the anthem from being played at events that the government deems “unworthy.” This includes events such as funerals and as background music in public places.

As if to compound the strict rulings, one lawmaker even criticized the placement of hands on hearts during the anthem, reasoning that the gesture is too American.

Chen Guoling, of the standing committee of the National People’s Congress, claimed “Citizens must not make any posture, including foreign, religious, or self-made.”

Opponents have defended their methods of showing love for their country in any way they wished. One aspect that Chen hasn’t addressed is how one can stand with no posture at all.

Last month was LGBT Pride Month and to celebrate, Nestpick, a Berlin-based online housing platform, decided to rank the top 100 best LGBT cities in the world. Surprisingly, a few Chinese cities made it onto the list. Unsurprisingly, they were ranked pretty low.

Hong Kong was 83rd, Shanghai ranked at 89, and Beijing brought in the tail-end with a placing of 100. 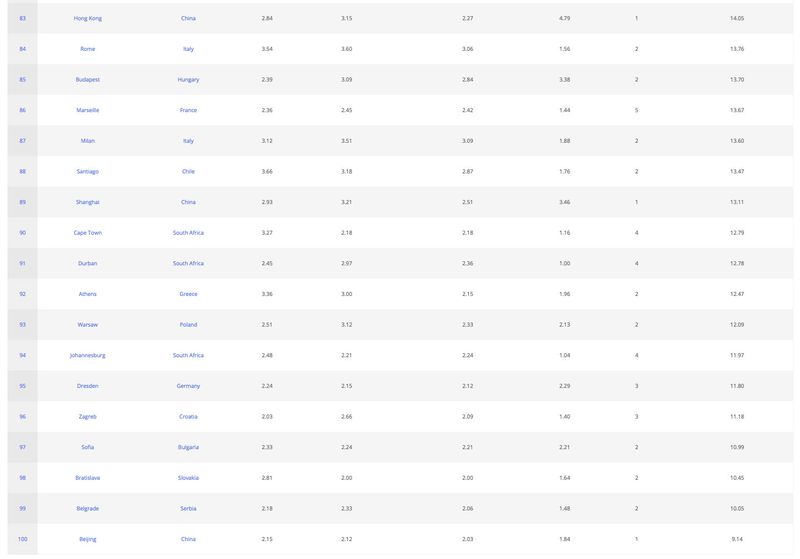 The ranking was done with this simple formula:

Over 2,000 participants from each city weighed in on the first three categories. The Safety score was taken from publicly available police data. When it came to rights, Nestpick did their own research on each country’s laws and China happened to be the only country with cities in the top hundred with a score of 1 out of 5.

But it’s not all bad news for patriotic Chinese.

Long-time rival Japan only has the one entry (Tokyo), and neither North nor South Korea even made it onto the list.

A recent graduate in Nanjing, Jiangsu province, decided to propose to his girlfriend by buying 99 of her favorite dish—spicy crayfish.

The boy then arranged them into a heart shape with the word “LOVE” beside it.

He led his girlfriend into the center of the heart and recited his lines:

“I’ve just graduated this year. I don’t have the money to buy you a car or a home, but I have a heart that will follow you to the ends of the earth.”

After considering the lobster, the girl ultimately agreed to the boy’s terms.

The China Dream. The Core Ideology of Socialism. The Four Comprehensives. The “Five-in-One” General Layout.

Not just the ramblings of your crazy poli-sci professor. Known collectively as The Glory and the Dream, these are the titles of a selection of four-minute videos issued by the film department of the State Administration of Press, Publication, Radio, Film, and Television.

According to Sixth Tone, starting from July 1, all cinemas have been instructed to screen one of the clips before every movie. This campaign will run until October to build anticipation for the Communist Party’s 19th National Congress.

Despite this injection of propaganda before Despicable Me 3, there is good news—this guy may make an appearance.