Ever seen any strange-looking brooms around China? Soon you may be seeing a lot more of them.

Anyone can feel frazzled even after just a day in China’s six-ringed capital city. But it seems that many of Beijing’s brooms are stuck in an endless state of Bad Hair Day blues. The exuberantly sprawled—or thinly spread—brooms that sweep the city’s concrete and the country’s cobwebs are an immediate eye-catcher to some foreigners, many of whom come from places where plastic or straw brooms are a much sleeker counterpart to the just-got-out-of-bed brooms on this part of the planet.

In actuality, like Samson, the bamboo broom’s “hair” is the source of its strength. To investigate the use and origins of the bamboo broom, I took the elevator into the basement of the Jia Hui International Center in East-Central Beijing. A well-dressed 服务员 led me into a closet crammed with cleaning supplies and a member of the cleaning crew, who helped elucidate for me the continued popularity of bamboo brooms in Beijing. 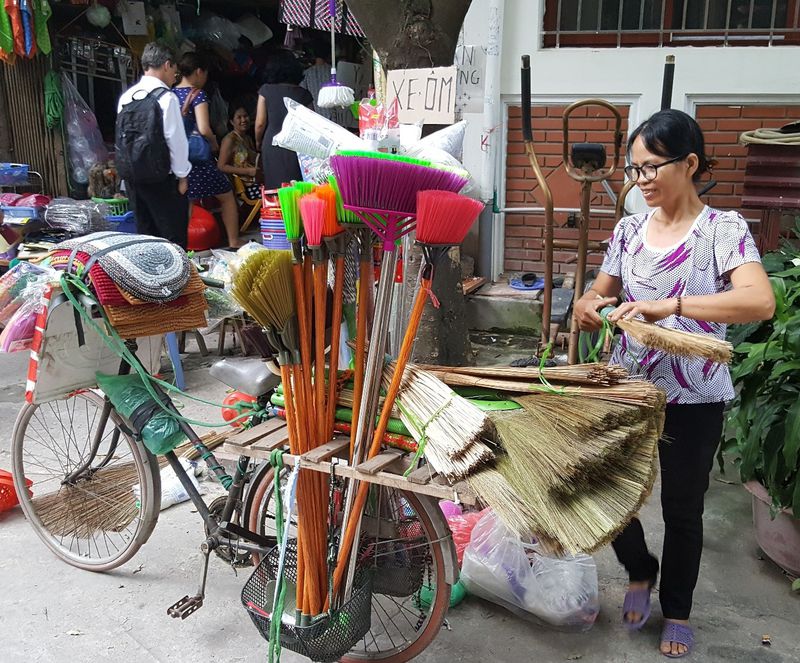 A bicycle vendor in Hanoi, Vietnam selling a wide variety of brooms. (Devpolicy)

At Jia Hui, the woman showed me, there are two types of brooms: one thin and plastic, the color of Freshburst Listerine or medical scrubs, and another made of bamboo. The wide reach of the bamboo broom’s bristles, which is largely responsible for its unkempt appearance, are what makes it the ideal broom for cleaning up outside, where there is, usually, a larger area to be covered. A plastic broom, in contrast, is more suited for the indoors because of its tightly-bound bristles that can latch onto much more dirt in a smaller area.

Nevertheless, it may still seem odd that a country that, about 60 years ago, began a Great Leap Forward to surpass the West and that, about two weeks ago, released a state-media made rap about modernization, has persisted in using an item that, for all of its usefulness, seems primitive in comparison.

The look of the bamboo broom closely resembles that of the besom, simply a bundle of twigs tied together around a stick and the earliest ancestor of the modern-day broom.

According to the History page of the website of Broom & Basket Shop, an Iowa company that specializes in homemade brooms and baskets, a besom “wasn’t very efficient. It left tracks in the dirt but did not get rid of it.” BroomShop.com, the website of another American, hand-crafted broom company describes how “these crude brooms did not sweep well and fell apart after a short time.”

In the early 19th century, the unstable and inefficient besom began to be replaced by a type of sorghum that became popularly known as broomcorn. Today, besoms are hardly seen anymore. Instead, broomcorn brooms or synthetic plastic brooms do away with the dust-bunnies of many of the world’s developed countries.

However, that is slowly beginning to change. Along with an increased awareness of environmental sustainability, the bamboo brooms that the cleaning crew in the basement at Jia Hui can restock for one to five mao apiece (about seven cents) here in China, are now beginning to be picked up by companies such as Dover Saddlery and Master Garden Products, whose consumer base is Western. The same brooms that are seen sweeping the streets of Beijing every morning are being sold for between 10-20 USD by these companies, which advertise them as “sustainable,” “all-natural,” and “eco-friendly” alternatives to what one company representative called “a regular broom” with corn or plastic bristles, which is sold for roughly the same price on Amazon.

The unique aesthetic of these “irregular brooms” has also become a selling point in the West. Bamboo brooms, which are not only endemic to China but are a staple of other Asian countries as well, are being marketed by one California-based company as “traditional Japanese-style broom[s].” In an online article explaining how to assemble a bamboo broom, The Japanese Gardening Organization, located in Texas, describes the broom as an object of “joy and beauty.” Suzanne Tuzzeo, a freelance photographer, is even selling a picture of a bamboo broom on Etsy, an artsy e-commerce website headquartered in Brooklyn, New York. Tuzzeo describes her work as “seeking out… a selection of places and objects with a twist.” Her picture, she explains to me via email, was inspired by “the tradition and wonderful culture that was so well represented by the broom.” And the price for Tuzzeo’s Bamboo Broom in Beijing? It’s 35 USD, enough to buy several thousand such brooms on Taobao. 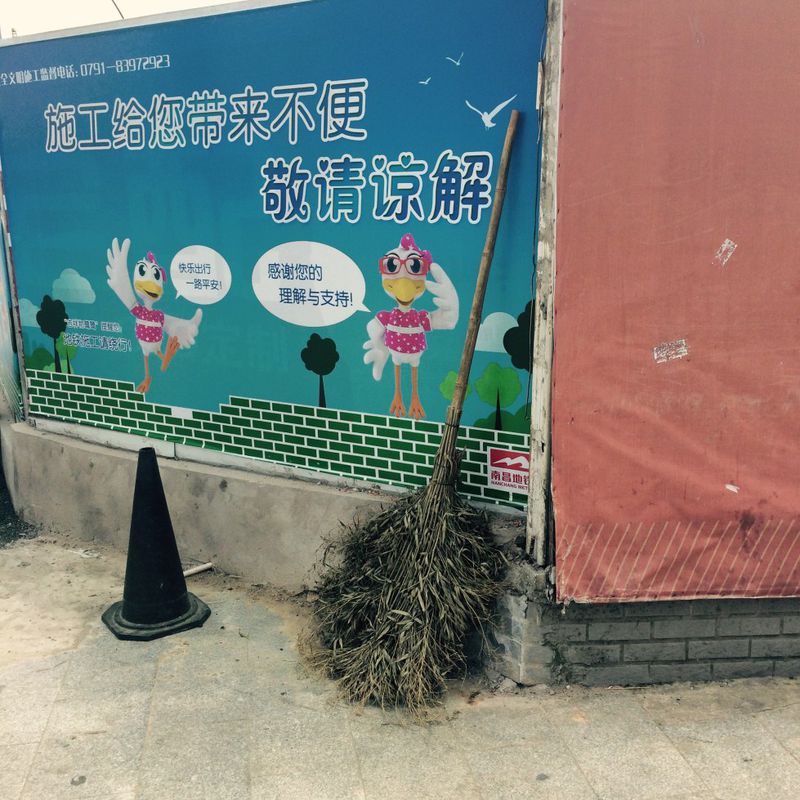 A broom in Nanchang. (Brooms of China)

Customer reviews online are so far favorable, as American consumers have praised both the broom’s artistry and its utility. A 2014 customer review by a user named D. Glassman describes the broom as “fun to use and very homey at the same time.” Peer, from Canada, calls it “truly the best broom.” Suzie from Pipersville, Pennsylvania praises the bamboo broom for being “the perfect shape and size…and fun to have around for Halloween.”

While the bamboo broom is enjoying an international audience, it is still far from achieving ubiquity. Thus, to ease the cleaning culture shock brought about by a bamboo broom for those uninitiated in its usage, Dover Saddlery has made a short video breaking down into steps how to become an active and eager user: “Step One: Super Quick Assembly, Step Two: Sweep With Speed and Efficiency”—and that’s it.

Paul Rudkin, who his Twitter bio calls him “an Englishman stuck behind the Great Firewall of China,” exhibits his three-year pictorial record of China’s bamboo brooms from Lhasa to Chongqing, from Xi’an to Shanghai in “Brooms of China,” a user-friendly WordPress blog. He could not be reached for comment, but the subtitle of his online archive of brooms suggests a pervading sentiment among not just Rudkin but many foreigners who regularly encounter the Middle Kingdom’s cleaning culture: “A Photo Blog of the Infamous Brooms of China.”

Whether these brooms strike you as infamous or inconspicuous, offensive or ordinary, take pause the next time you encounter the “brooms of China.” They may soon be sweeping the streets of your hometown too.