Welcome back one and all to the Viral Week, where we look back at all the greatness the last seven days brought us. Coming up on today’s issue we bring you the right way to close the trunk of your car, China has many skills, and littering in front of an officer. But first…

The head of Alibaba, Ma Yun, has long fostered an interesting cult of personality that has drawn in fans from across the country.

From officiating mass weddings to identifying himself with Forrest Gump, Ma has separated himself from the rest of China’s elite with his whimsical personality.

Recently, Ma hit the spotlight again when he made a series of stage appearances. Last month, he wowed Alibaba fans by performing a dance routine to Michael Jackson’s Billie Jean. More recently, he crashed a music concert, took up a microphone, and belted out some of his favorite songs.

So without further introduction and ado, enjoy.

China has suffered from many a fitness challenge over the years. Countless citizens found themselves nursing sprained shoulders after attempting the reach-around technique for thin waists. Others were banned from social media when their “bikini bridge” photos were (mistakenly?) recognized as pornography. 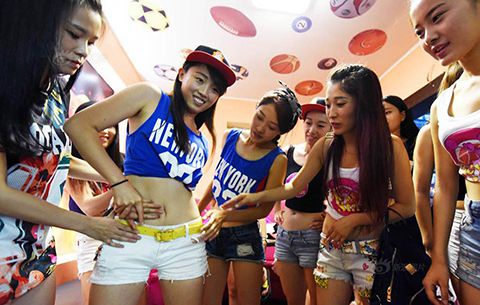 If your shoulder has not dislocated, you haven’t gone far enough (Sina) Now a new activity has emerged for Chinese citizens to brag to their friends about. The craze started when a woman carrying a baby found it difficult to close the trunk of her car. Rather than becoming discouraged and giving up, she promptly utilized her enhanced muscularity to extend her leg up and axe-kicked the trunk shut.

Rather than simply being impressed, Chinese netizens quickly took this act as an attack on their abilities and the web was soon flooded with others taking up the challenge.

According to its website, the WorldSkills Competition is a contest between nations to showcase a variety of skilled careers to youths. Participants will compete in a selection of events including bricklaying, floristry, web design, and hairdressing.

The event is held every two years, with the current one underway in Abu Dhabi. And although many may believe that countries traditional strong in global competitions may also hold the advantage here, the top three for the 2015 WorldSkills Competition held in São Paulo, Brazil, were Brazil, South Korea, and Chinese Taipei.

A man in Wuhu, Anhui province, managed to escape punishment when he threw an unwanted umbrella out of his car window as it was passing an intersection.

The umbrella in question landed near the feet of an on-duty traffic police officer, who then proceeded to pick it up.

The entire incident was caught on security cameras, but so far no action has been brought against the man in the vehicle.

When interviewed, the driver of the vehicle said that he was, in fact, moved by the officer standing in the rain and so decided to throw him an umbrella.

However, this does raise questions as to the validity of such claims.

Firstly, the video clearly shows the umbrella exiting the vehicle from the passenger side. It is highly unlikely that the driver of a car that is both moving and turning would be able to throw an umbrella with such accuracy. This would suggest the presence of an accomplice. If not, then the driver is clearly endangering other road users with his unsafe driving practice.

Secondly, assuming that this act is one of altruism, given the observation above, the driver would be taking credit for this charity and compassion from the real individual, thus painting him as a media-hungry charlatan.

Finally, the occupants of the vehicle have, in effect, given a gift to an officer of the law. Explanations are needed as to whether or not this constitutes bribery. Background checks should be initiated before any claims of innocence are processed.