Well, the Congress is finally over, things proceeded as expected, and the Viral Week can finally return. Coming up today, we bring you passport rankings, the winter facekini, a Chinese gamer suspended from play for hideous behavior, and an ex’s public revenge. But first…

Maybe the most recognizable restaurant in the world, McDonald’s outraged their lovin’ Chinese customers when it was revealed that they would be changing their name from Maidanglao, a Chinese rendition of the English name, to Jingongmen, a translation of “Golden Arches.”

Netizens swarmed online to make fun of the new name. Some claimed that the new name sounds like a restaurant from the Chinese countryside—which is not a good thing in the eyes of many Chinese. Others felt that it could not live up to the reputation of such a global brand. Then there were many who warned that “they could lose the Chinese market.”

Unfortunately for all the detractors, McDonald’s will not be changing the signs outside of their restaurants in China. According to CNN, the new name is only for the registration of the business and comes after the parent company in the U.S. recently sold most of its business in China and Hong Kong to a Chinese group. The restaurant branding will continue to stay the same.

So to all those users that shared pictures of McDonald’s with the caption “To remember you by”—Ronald is laughing at you.

Out of 199 passports, the Chinese ranks at 136. This is mostly due to its visa-free score of 60, which is comprised of 22 countries for which holders do not need a visa and 38 countries where they receive a visa on arrival. The top-ranking passport, Singapore, has a score of 159 (124 visa-free, 35 visa on arrival).

While many lament the lowly status of the mainland Chinese passport—especially considering passports from Hong Kong, Macau, and Taiwan rank 45, 66, and 67, respectively—they can rejoice in the fact that their visa-free score is an improvement on last year’s number by +2. While Macau also improved by the same amount, Hong Kong and Taiwan both experienced a -1 change.

When the facekini was first released, it was hailed, by very few, as one of China’s greatest modern inventions. No longer did women have to worry about potential harmful rays scarring their skin.

Now, the woman behind the original has produced a line of facekinis for use in colder climes. 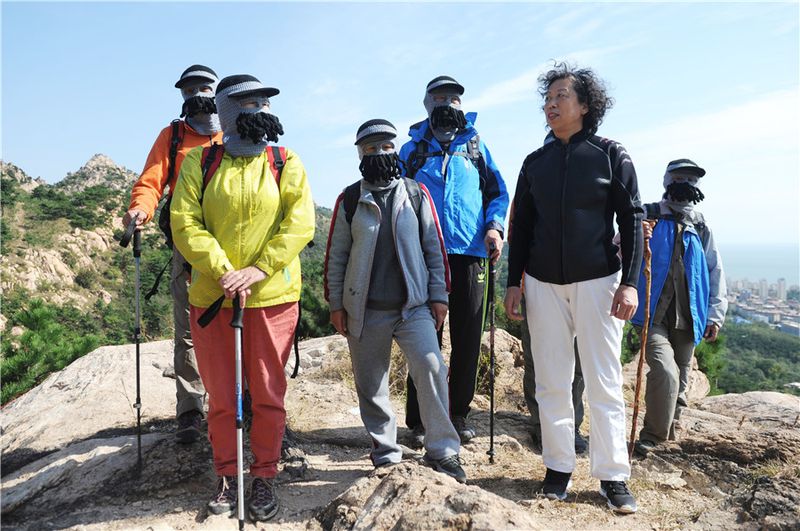 The winter facekini aims to protect users from the cold. In addition to simple coverage, the attire includes two new features. The cap at the top will help shield sunlight from the wearers eyes, while the black-colored “moustache” is to absorb the heat from the sun as well as provide extra guard against cold air. Adopters of this accessory should be aware that purchasing one will set you back 70 RMB (around 10 USD).

The name Vasilii may not be well known among the general public but within the lucrative world of esports, he was widely regarded as one of the most mechanically skilled professional League of Legends (LOL) players. However, since 2015, Vasilii (real name Li Weijun) has not made much impact on the international stage and spends most of his time livestreaming on ZhanQiTV, where he has nearly one million subscribers.

Last week, during a broadcast, Li lost an online game. His girlfriend could be heard in the back, telling him to not blame others for the loss and to not take it so seriously. Li seemingly remained calm for a moment before flipping over his webcam in a fit of rage. What followed was furniture being thrown, Li screaming curses, and sounds of weeping from his girlfriend. At multiple moments, Li can be heard saying “I’ll kill you.”

While this was happening, the livestream continued with many viewers making comments. Some were shocked, but many were either laughing or praising Li (by typing “666”, which means “doing really well”). The broadcast then shows Li reorganizing his desk before he is taken away by police.

Since this incident, Newbee, Li’s gaming team, and ZhanQiTV have both terminated his contract.

However, more recently, his girlfriend posted on Weibo a lengthy piece where she says that, while Li did lose his temper, he did not, in fact, hurt her. She claims that she tried to make the police leave. It is unclear whether the girlfriend’s claims are genuine or part of a cycle of abuse. Regardless, Li’s display of verbal abuse was clearly caught on camera.

In an interview with Sixth Tone, Xu Fei, an esports player and commentator based in Shanghai, said he believes Li’s outburst was due to mental illness, adding that he “could sympathize with him.” What readers should take away from this statement is that people can rationalize pretty much any heinous behavior.” As yet, it is unknown what kind of punishment Li will incur for his abuse.

Warning: video may be uncomfortable for viewers and volume should be turned down.

Jay Chou held a concert in Hangzhou this past week, but it was one plucky fan that caught the attention of the internet.

During a break, Chou asked the crowd for a song suggestion. He picked out a woman wearing white with bunny ears, calling herself “Little Fairy,” who told everyone that her soon-to-be married ex-boyfriend should be in attendance as well.

As Chou and the crowd react, Fairy adds: “Even though he is ugly and blind, I still give my congratulations.” She requests the song《算什么男人》, which means “You Call Yourself a Man?” She then goes on to ask for a close-up to let her ex’s fiancée see how beautiful she is. The segment ends with both Fairy and Chou singing the requested song.

Many netizens were split on if the girl’s attack was in good taste.