Competition is an important selling point for many reality shows: I am a Singer assembles established singers to face off to become the “king of singers”; Top Funny Comedian is pretty self-explanatory; The King of Kanone is a figure skating competition among pop stars; and even Qipa Talk, a debating show, focuses on who can give the most compelling opinion.

There’s no show, however, for who is China’s most melodramatic diva—but Zhejiang TV’s new show, The Birth of a Performer, seems to want to be the first.

Premiering on October 28,  the show is actually an acting competition, where six young actors divided into three pairs to re-enact clips from classic movies, judged by an all-star panel: Zhang Ziyi (The Road Home,Crouching Tiger, Hidden Dragon), Liu Ye (Lan Yu, Postmen In The Mountains) and Song Dandan (I Love My Family). The better actor of each pair will make it to the next round, in which they will each act with one of the judges, and the format repeats with different actors each episode.

In less than 12 hours after premiere, the show had been viewed over than 97 million times online. But on Douban, China’s most popular show-reviewing website, The Birth of a Performer is rated just 5.4 out of 10, a disappointing result. This seems contrary to its popularity, but the explanation is quite simple: People trash it for the bad acting but still tune in for the delicious cat-fights. As one reviewer quips, perhaps a more appropriate name for the show should be “The Birth of a Troublemaker.”

How so? After the first episode was aired, contestant Zheng Shuang and judge Zhang Ziyi were trending on Weibo. In the show, Zheng and her partner Ren Jialun was asked to improvise a skit based on the theme of “quarrel between boyfriend and girlfriend.” While acting, though Ren tried show anger, Zheng just couldn’t stop laughing. 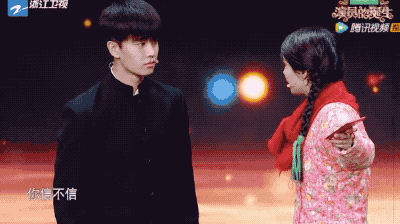 When they finished, judge Liu Ye said: “I am satisfied.” All of a sudden, Zhang Ziyi exploded: “What are you satisfied with? Zheng Shuang had been laughing on stage…They had no faith in acting!” Liu accused Zhang of being too harsh, and took off one of his shoes and slammed it on the table for punctuation. Then Zhang picked up the shoe and threw it off stage.

After some time, the third judge, Song Dandan stepped in, telling Zheng: “You see? They dare to flare up.” Then, Zhang burst into laugh, hugged with Liu, and said they were just demonstrating how to quarrel for the contestants. But not everyone believed this explanation, and since the whole shoe-fight was caught on camera, gif wars on China’s internet have never been the same. In the performance of the second pair, Liu Yun and Huang Lu, who recreated the scene of movie Dearest, dispute broke out again. When judges criticized Liu for “crying without tears,” Liu said that’s because Huang changed the script without telling her, so she couldn’t act well.

But surprisingly, the winner turned out to be Liu, rather than Huang, because her performance was more “real.” Miffed, Huang talked back: “I thought I had won.” Later, one commentator of the show, playwright Yu Zheng (who is infamous for plagiarism) blamed Huang on Weibo for not showing respect to the judges and other performers. In his post, Yu even accused Huang of cursing at the staff after she lost the competition. Liu’s close friend, actress Qin Lan, also posted on Weibo: “People who are too self-important and change the script casually are lack of virtues.”  In response, Huang posted: “People who follow different paths do not take counsel with one another.”

The producers probably discovered that the passive-aggressive infighting was a huge boost for their show’s popularity, so in the second episode, there was more. Actresses Shu Chang and Xin Zhilei performed a scene from 2004 TV series War and Beauty. They both did pretty well, and Zhang voted for Xin, while Liu voted for Shu. Then, Song gave her decisive vote to Shu, which meant Xin was eliminated.

In the backstage interview, Xin said on camera: “I didn’t expect I would lose, and I didn’t feel [Shu’s] acting was that good.” This didn’t cause too much controversy at first, but later, judge Song probably thought things were getting too quiet around here, so she made an apology to Xin on Weibo: “It’s too far away from the stage, that the details couldn’t be clearly seen in the scene, and it’s very easy to be influenced by the plot. When I watched it on TV, it turns out that Xin Zhilei’s performance was really good. I am sorry!” Then, as you could guess, it became hotly debated on social media whether Xin or Shu was better, and it’s unclear to this day whether Song was stirring the pot purposely.

Actually, some contestants did good job on stage, like Zhai Tianlin and Yu Shaoqun—but who cares about them? Not the viewers certainly, many of whom declare they are only anxious to know which people from the show had a fight this week. And the network is laughing all the way to the bank: as American TV series This Is Us put it, “It is not the writers’ fault this show was so bad; this is not the network’s fault for airing it. It’s you guys! Why are you watching this stuff?” From the South Pole to the Middle East: TWOCtv interview a young couple who’ve taken DIY world travel to the extreme