China’s biggest messaging service is no stranger to race-related controversy. Last month, an African-American woman living in Shanghai reported that WeChat’s translation function turned “黑老外,” a mild pejorative for a black foreigner, into the N-word.

But that controversy is just the tip of the iceberg: WeChat’s sticker galleries, where users can download animated and often user-submitted biaoqing (表情), are a nexus for blackface and anti-black representation, where longstanding racist tropes are reinterpreted with Chinese characteristics.

This may not be apparent to every user; I never found out until I changed my WeChat account registration from a US phone number to a Chinese one, which gave me access to a new set of sticker offerings based on my new region—one that’s apparently into casual stereotyping of black people.

Racism in Chinese media is by no means new. From the “This is Africa” exhibit at the Hubei Provincial Museum, where photographs of African people were put alongside images of wild animals, to the 2016 Qiaobi commercial where a black man is shoved into a washing machine and comes out Chinese, there’s a persistent pattern of prejudice against African and African diaspora peoples in Chinese popular culture. 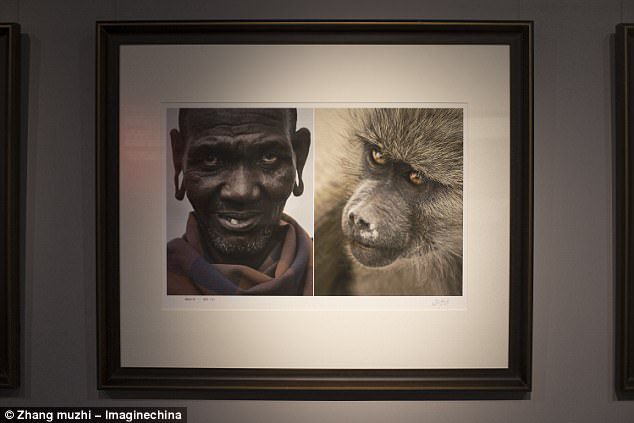 Photos of African people next to photos of animals at an art exhibit in Hubei last month. (Dailymail)

Nor is it surprising that there is “uncivilized” content in WeChat’s sticker gallery: Although WeChat’s submission guidelines demand all content be “accordance with moral regulations,” there are, among the cats, bunnies, and other cuddly creatures, images of beatings, suicides, and shit—literally—in the sticker galleries.

What makes these racist WeChat stickers unique is not that they are ethically questionable. Curiously, while invisible to users with US phone numbers, these stickers borrow from US aesthetic traditions, reproduced but also imbued with a life of their own in China.

At the time of writing, users with Chinese phone numbers who type the word 黑人, “Black person,” into the search bar of the WeChat sticker gallery will get 65 results. Roughly a quarter of these results employ elements of blackface, originally a mid-19th century, US theater tradition where White actors put on dark makeup to play black people in minstrel shows. Aside from blackening the face, these “comedic” imitations depended on exaggerating features associated with black people, such as large lips and eyes, as well as stereotypes like being lazy and ignorant, or alternatively, a menace to white people.

In the US, these dehumanizing portrayals were replicated in film, advertisement, and cartoons, where they helped desensitized white audiences to systematic oppression. In China, WeChat stickers that borrow from blackface have achieved a similar end, according to Kaia Niambi Shivers, a New York University professor researching black representation in media: They “relocate” blackface imagery and “normalize racism.” 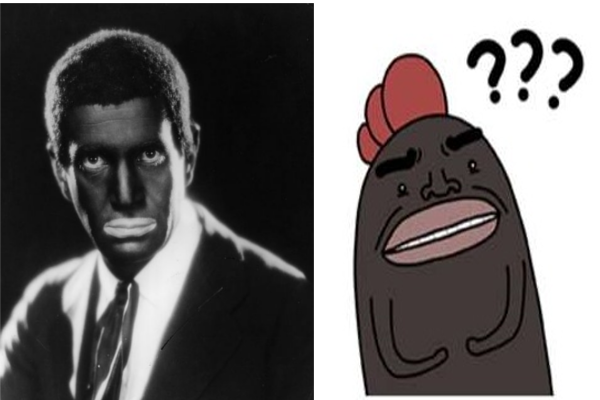 Popular 20th century U.S. singer, actor, and comedian Al Jolson in blackface beside an image of a blackfaced rooster from WeChat. (Tumblr, WeChat)

How normalized? While researching, I did not come across any Chinese-language source that considers these stickers to be racist. Tencent, the makers of WeChat, did not respond to a request for comment, but sticker creators have previously defended their adoption of blackface imagery. Artist MisaChan, creator of a 16-sticker set called “Black Person Stickers” (黑人表情), writes in the description “[The character’s] name is 黑子 [the characters for “black” and “child”]. In Cantonese, 黑子 means bad luck. Also, the black people stickers popular these days are pretty funny, so I drew some; there’s no racial discrimination.”

Similar language is used in a WeChat article about Black WeChat stickers called “This Race is Naturally Dramatic.” The author BiuBiu在英国, who identifies as an international student in the UK, appends a short P.S. about prejudice: “Note: this isn’t racial discrimination; this is racial worship.” 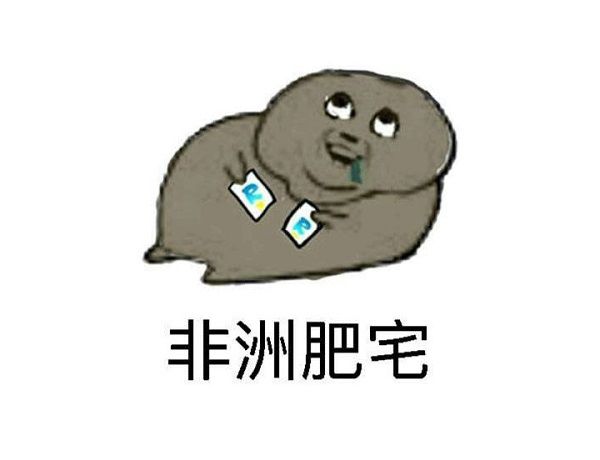 The closest things to a critical examination of these emojis are a 2016 article in the Beijinger about inappropriate WeChat emojis, and a “comedic” WeChat article written in Chinese called “My White Friend Says: ‘Black People Question Question Question’ Stickers Are Racial Discrimination,” which reinterprets the author’s white friend’s reaction to black stickers as outrage that there weren’t enough white people stickers. 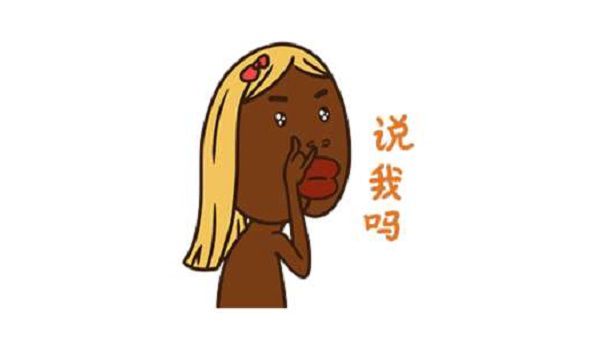 “Are you talking about me” (WeChat)

Both the satire piece and the article by BiuBiu在英国, though, refer to stickers with more recent aesthetic referent than 19th-century theater: a 2016 meme from the US called “Confused Nick Young.” As countless WeChat articles explain, the original meme was a screenshot from a short YouTube video about an NBA player Nick Young, called “Day in The life of Nick Young.” In the video, Young, who is African-American, gives his mother a confused, questioning look when she comments that he was a “clown” when he was younger. Though the image was widely shared and parodied in the US—including within black communities—the meme has never achieved the virality there that it did in China. 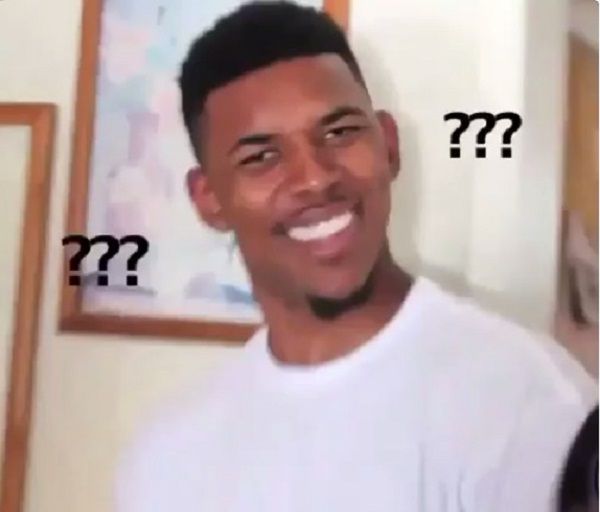 In China, the “Confused Nick Young” image became known as 黑人问号, “Black person question mark.” Of the 65 results for 黑人 in WeChat’s sticker gallery, over 80 percent have stickers called 黑人问号. As WeChat user KFM981 describes in a WeChat article, “all one needs is black skin + a slow expression + an off-line lighting engineer, and it’s hard to evade the fate of ‘becoming a sticker.’”

In reality, it’s even simpler than that. “Black person question mark” has become so embedded as an expression of confusion in Chinese internet language that many of the stickers do not even refer to black people. The term has been removed from its original meaning and become simply a replacement for the word “confused.” 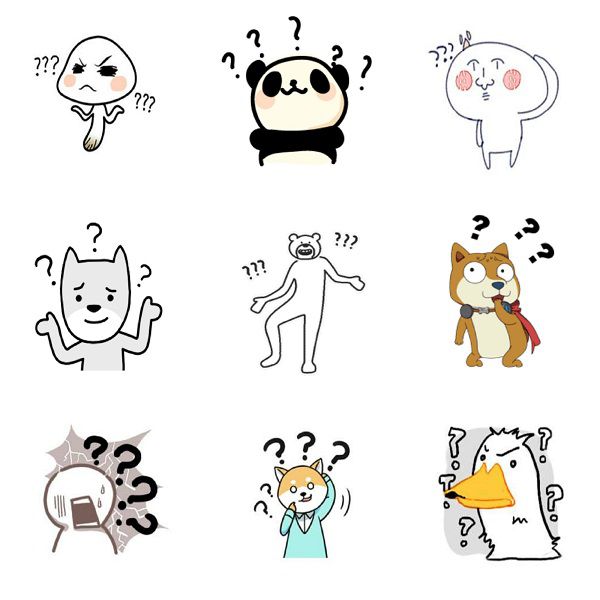 Non-Black and non-blackface stickers identified on WeChat as 黑人问号. (WeChat)

For example, in a WeChat article unrelated to race, there’s the sentence: “Right when the assistant saw the news, he also had a ‘Black person question mark’ expression.” In another article about cell phones, the author writes, “When faced with Chinese-made Gaorui mobile phone’s 3,000 yuan selling price, consumers used to paying 2,499 yuan, 1,999 yuan, or even 999 yuan for a flagship model should all have a ‘Black person question mark’ expression.”

Sound like positive strides toward color-blindness? Actually, Shivers points out that although the applications of this expression have moved beyond a racial context, “Black person question mark,” no matter where or how it is used, will always be connected back to black people as a kind of cultural geography; the confused gesture has been internalized as a black act.

Furthermore, Shivers mentions that the idea of a questioning black person is also rooted in the minstrel tradition. Minstrelsy had its own set of stock characters from Uncle Tom and Zip Coon to Buck, Pickaninny, Jezebel, Mammy and Jim Crow. “Black person question mark” relates to the Tambo and Bones minstrel characters whom audiences appreciated for their simple-mindedness. 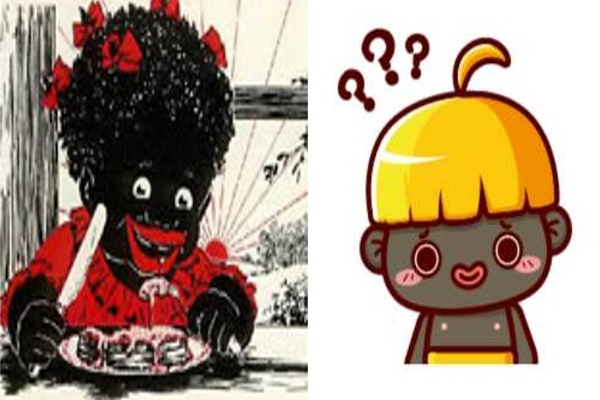 A drawing of a pickaninny beside a 黑人问号 WeChat sticker. (historyonthenet.com, WeChat)

The comparison between lighthearted WeChat stickers and racist antebellum entertainment may sound extreme; it may seem unreasonable that a sticker could subjugate a race of people, but in some sense, that is exactly what is happening. The “Black person question mark” has, for some WeChat users, become an identifier of blackness just as characteristic as dark skin. As KFM981 writes, “Nowadays, if you just come across a black friend, you will automatically add a question mark to their forehead.”

Seeing black people with question marks floating around their foreheads “removes dignity and integrity and actually humanity from people,” Shivers says. “People of African descent are caricatures in the eyes of people who do not understand the culture of the people…This is an extension of this idea about black people not being human.” 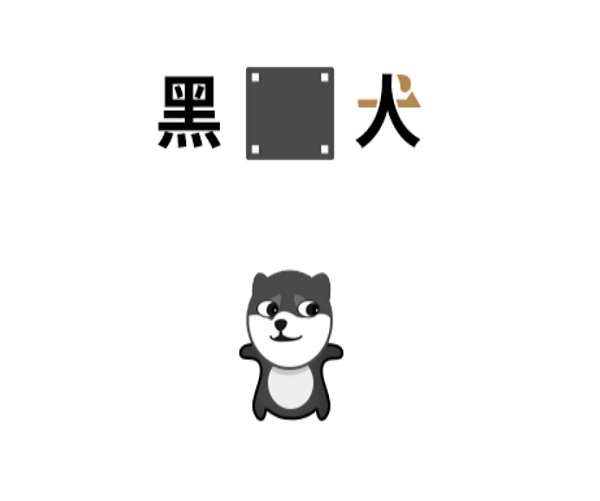 A visual play on words that both says Black person “黑人” and black dog “黑犬.” (WeChat)

Nick Young, for example, is hardly ever described simply as Nick Young in WeChat articles. He is called “黑人问号boy” or something along the same lines. Even when Young’s name is used, it is only written after the phrase “Black person question mark,” as in the headline for the WeChat article “Iggy Azalea and NBA Black Person Question Mark Face Nick Young Break Up!”

Writing about her trip to Ghana with volunteer organization AIESEC, a student from the Communication University of China admits through her chapter’s WeChat account that black people “usually emerge in my stickers and funny jokes. Therefore, after I arrived [in Ghana] I finally realized the old me had a lot of areas of misunderstanding.”

Despite attesting to the humanity of black folk, the article is titled “Me and ‘Black Person Stickers’’ First Meeting.” This suggests that this student still perceives what she learned about blackness in Ghana through the culturally embedded expectations developed from stickers on her phone. Emoji racism has lately become recognized in the US. In 2016, in response to complaints that its humanoid emoji options were limited to characteristically Caucasian or cartoonish bright yellow faces, Unicode Consortium, a non-profit organization that makes emojis for Apple, Android, Windows, and other companies, released a new set of racially-inclusive emojis, which allow users to adjust the color of the emoji they send to a shade that is suitable for them. Other emoji-making companies such as EverythingAmped Inc., based out of San Francisco, and AfMob, in Cape Town, have also released their own versions of inclusive emojis such as “Black Emoticons,” “AfroMoji,” and “MusliMoji.”

The reactions to these efforts have been varied. At the time of the Unicode emoji release in 2016, it was argued that these emojis were creating an even more discriminatory social media environment. The debate has been reported in Chinese-language WeChat articles, but the introspection hasn’t extended to the ways that racism manifests in emojis in the Chinese context.

“[These stickers] normalize white supremacy,” Shivers says. Chinese people who create or disseminate these stickers, who themselves are not white, “are actually playing into the very system that racializes and oppresses them. 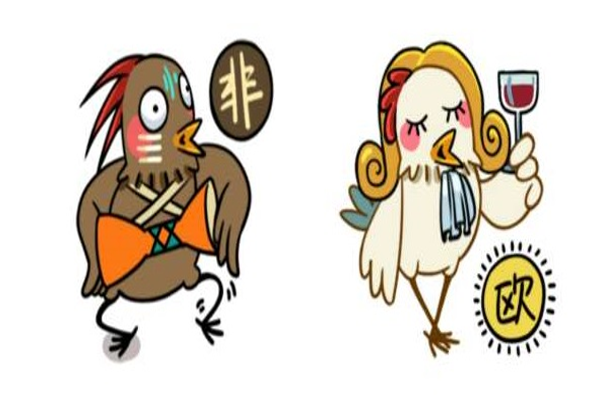 The sticker on the left reads “Africa.” The one on the right reads “Europe.” These are the only two continents represented in this sticker gallery. (WeChat) I worked in a Chinese massage parlor in America