How is autism treated in China?

How is autism treated in China?

As with many disabilities, the condition is misunderstood and often feared. But NGOs working with the government are offering new hope

Carol Ng’s son, Hugo, has autism, and, according to one report, Carol “has tried hard to look beyond the disruptive behavior of…Hugo, who is now 7. He was unwelcome in his mainstream primary school as he was commonly referred to as ‘dangerous.'”

Carol’s is not an uncommon story across China. There is a significant stigma attached to physical and mental disabilities in Chinese society, including autism—that is, if it is even acknowledged by parents and teachers.

There are an estimated 85 million people with disabilities in China, with around 10 million people children registered autistic, according to a 2014 report from the Chinese Society of Education. The Autism Children Foundation state that there are 10,000 autistic children in Shanghai and 25,000 in Hong Kong. But figures for both autistic children and adults are likely to be underestimated, due to unclear diagnoses or poor understanding of the condition in China. Both physical and mental disabilities are traditionally hidden away by families and seldom dealt with.

A 2015 report from the Statistical Communiqué on the Development of Education in China stated that there were 50,300 teachers for special education schools, providing education to approximately 440,000 students. The China Disabled Person’s Federation reported that 135 public-funded centers took in approximately 55,000 patients between 2011 and 2014. While efforts are being made, this figure leaves a staggering number of disabled children without the special education they need. Unfortunately, public facilities are unable to meet the demand of the 10 million children diagnosed with autism. 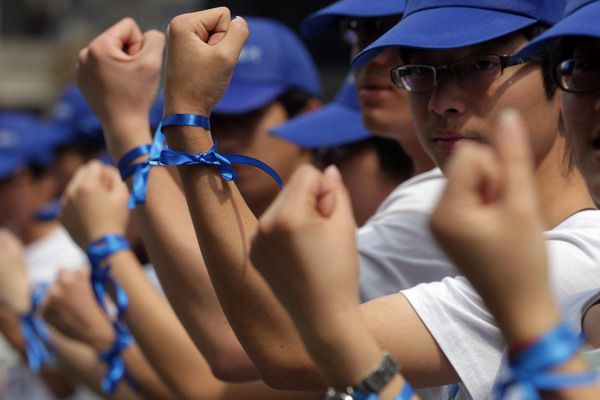 Volunteers raise their arms with blue ribbons tied to them during an event to promote caring for autistic people. (Xinhua via China Daily)

One school has been trying to overcome these difficulties since 1993. Stars and Rain was China’s first non-governmental organization dedicated to supporting both autistic children and parents of children with autism. Founded in 1993 by Tian Huiping, who has an autistic son herself, the Beijing school runs a 3-month training course for children aged 3 to 12 years old and their parents, providing skills to meet the unique learning needs of each child and teaching parents how to better care for their autistic children.

In 2006, the school expanded to open a group home for several teenagers; the children stay at the school from Monday to Friday, learning practical skills to cope with their behavior. As of 2013, Stars and Rain had supported more than 8,500 children and their families while training over 1,100 specialist teachers.

The organization’s website lists its main challenges, which include “limited awareness about autism diagnosis and the need for educational treatment,” “long waiting list,” and a “critical need for expansion of services.” Unfortunately, the school faces weak financial support and a lack of government funding. In the long-term, the organization’s mission is to “be a bridge between society and children with autism.”

As awareness of autism increases, the shortage of professionals trained in the field becomes more apparent. Several private training schools for both autistic children and their parents have appeared across China in recent years, with two located in Hong Kong and Shenzhen. The Autism Partnership School in Hong Kong was opened in 1999 but tuition fees are high and it is registered as a private primary school—parents pay HK$210,000 a year for specialist education. Another school opened in Beijing in 2016 aiming to train 8,000 professionals and provide online training to more than 50,000 people by 2018. The Stars and Rain school is also behind the new training institute in Beijing.

Yet misunderstanding and a lack of specialist care for autistic children still exists. A report in 2016 described a 3-year-old boy who died at a center  for autistic children which forced students to walk up to 12 miles a day and “cured” them by sweating in incubators. The so-called rehabilitation center in Guangzhou was run by a medical practitioner who claimed autism was a result of families spoiling their children, and making them lazy, calling the condition a “rich man’s disease.” He claimed that 99 percent of autistic children are from rich families, and the condition arises from treating children as ‘little emperors’. According to the People’s Daily, there are no official regulators to monitor these privately-run rehabilitation centers.

Another difficulty is highlighted by the president of the Shenzhen Autism Society, Yanhui Liao, who says “the services that exist in China are largely for children up to 6 years old, and there are no services for adults.”

Education and awareness of autism is important for correct diagnosis and treatment.Wang Yan, director of the Institute of Special Education at Beijing Normal University, told China Daily that “the key to improving special education lies in more supportive policies and funds, as well as efforts to attract and keep young teachers in their posts.”

Teachers who care for autistic children often leave because the job is too challenging and the salary too low—unsurprisingly, a private special-education school with more funding and higher salaries is often a more attractive prospect. However, few of the autistic population have the means to access private education, leaving many autistic children excluded from—or struggling at—mainstream schools. Parents are left with one last option: To send children to private rehabilitation centers where they are unlikely to receive the correct behavioral treatment, or make sacrifices to pay high tuition fees.

Financial difficulties are also faced by those trying to help the autistic community—many schools run in huge amounts of debt and struggle to pay overhead to keep themselves running. Li Xiaojiao, founder of Lingxing Community Service Center, a private school that looks after 67 autistic students, said the school has been in debt since its founding, and despite donations from individuals, “it is a bottomless hole.”

Li hopes Beijing will introduce “new policies to better address the children’s education needs.” Indeed, by the end of 2020, the government has said it aims to financially support 80 percent of children with autism. Last year, Xinhua reported that 36,000 autistic children from poor backgrounds now receive funding. Earlier this year, the government also released a new set of Regulations of Education of Persons with Disabilities, which require local governments to allocate funding and resources for education, awareness, and individualized education plans for people with disabilities.

Although autistic children and their families still struggle to navigate life with disability in China, the government’s pledge to invest more in public education and services offers the possibility of a better future. But ultimately, it is schools like Stars and Rain that currently offer real-life hope to both children and parents affected by disability in China. A Home for HIV Children

Children with HIV in China face widespread discrimination, but one school aims to help