I had always imagined myself, as a half-Chinese woman born in Hong Kong, arriving in China for the first time and fitting in straight away. In all my fantasies, my Cantonese slid naturally into perfectly intelligible Mandarin, and everyone I met became my brother or sister.

A trip to China, I knew, would be the spiritual equivalent of dropping in the final piece to win a game of Connect Four. All I had to do was get there.

This spring, a four-week music residency in Xiamen, Fujian province, gave me a chance to test that theory. Arriving on a steamy April day, I was taken to Gulangyu, a small, picturesque island next to the metropolis, where I would be given a space to build a studio. The residency was part of the British Council and PRS Foundation’s Musicians in Residence China program.

Gulangyu is a remarkable site, known for its unique colonial architecture, left over from Xiamen’s days as a British treaty port. Despite its tiny size of two square kilometres, the island plays host to up to 65,000 tourists daily. As I took my first steps in China, I fought through those crowds, dragging my equipment and sweating monstrously. Did I mention there are no cars allowed on Gulangyu? Dreaming of my first steps in China, I hadn’t imagined it would take 5,000 of them just to get to my hotel.

All around me was the landscape I’d longed to discover, but instead of instantly clicking, it felt utterly foreign. Mandarin was not, as I’d assumed, just two degrees north of Cantonese. I didn’t understand what people were saying. On arrival at my studio, I hungrily switched on my phone, only to discover an entirely different internet. I couldn’t even use Google to translate. When I asked for a glass of water to cool down, it arrived hot, and in a thimble.

I felt stranded, marooned. I’d made a huge mistake. 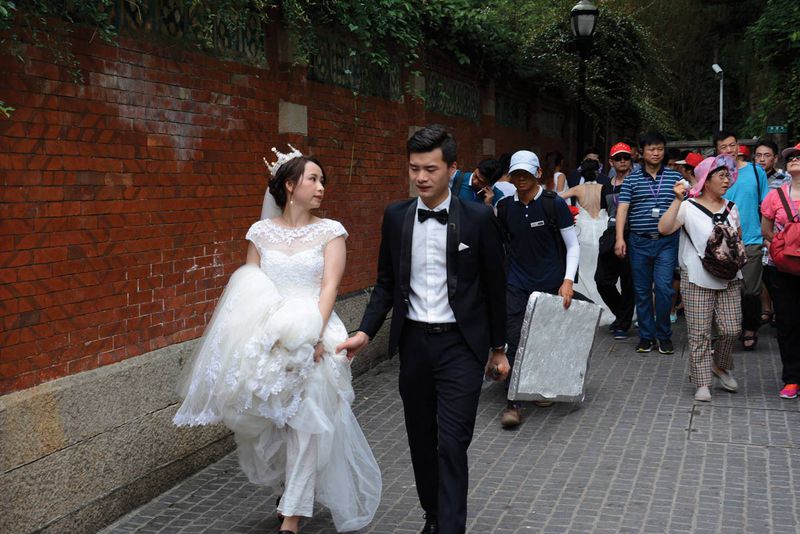 Gulangyu, with its colonial architecture, has become a popular destination for taking wedding photos

As I ate my first meal of boiled lettuce and white rice, the only options for a vegetarian on Gulangyu, I gave myself a pep talk. I’d been told that the city was filled with musicians, drawn to the region by the ocean air, cheap rents, and musical reputation of Gulangyu, which is also known as “Piano Island” for its large collection of colonial-era pianos and organs. My residency plan was to interview local people, and use their stories to write songs, pulling on threads to try to discover the essence of Xiamen. This method of inquiry, I believed, would also lead me to local musicians with whom I could collaborate. I just had to ask the right questions of the right people.

I tried cheering myself up by looking for those people, and saw a bride, stepping around the corner in a white dress.

That’s funny, I thought: A wedding on Monday afternoon?

Another bride came round another corner, followed by a groom. The romantic architecture of Gulangyu, it turned out, drew young couples to the place for their pre-wedding photos, which they would later display at their actual ceremonies. Suddenly I was surrounded by dozens of women in white dresses. It was a fever dream.

I had recently broken up with my long-term partner, and had freshly pledged to never get married. Now, at my lowest ebb, China was literally parading happily betrothed couples in front of me, mocking my life choices.

The mishaps continued. That night, at a welcome party thrown by my hosts, I locked myself in the toilet, misreading the instructions for the lock. Greeting the guests as they arrived, I mistakenly asked them to “leave” instead of “have a drink,” my Cantonese accent mixing up the two sounds. 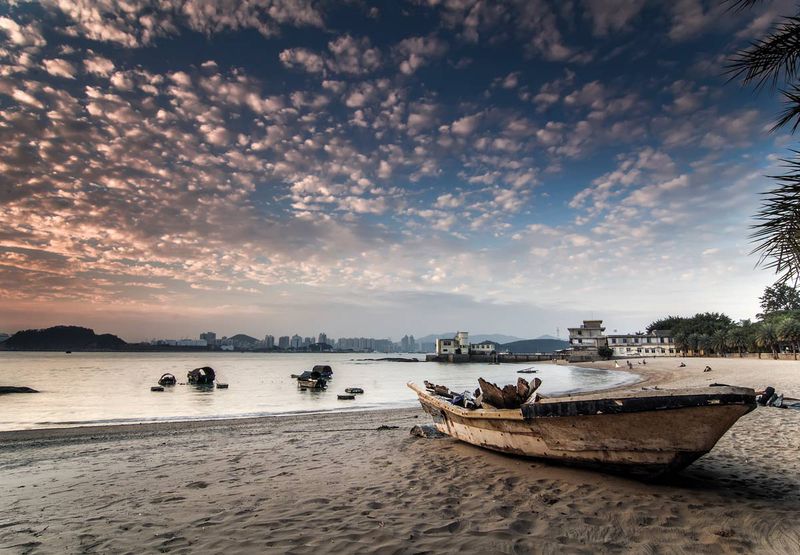 Approximately six kilometers from downtown Xiamen, Gulangyu is a famous resort and a World Heritage site

But the guests came back, and one by one, the musicians among them performed songs. There was a Hawaiian-guitar band, local to the island, all of whom were in their 70s. There was a traditional nanyin (南音) troupe, playing Fujianese folk music, which is known as a “living fossil,” its origins traceable to the Tang dynasty (618 – 907). And there was Mr. Guo, a Xiamen-based songwriter and professor, who sang a cover of Teresa Teng’s “The Moon Represents My Heart,” a song that I had listened to, alone in my room, for years. As he handed me the microphone, asking me to sing with him, it occurred to me: I had arrived in a country where other people listened to this song.

That might have been the turning point for my time in Xiamen. Or, it could have been finding a stack of this magazine in the bookshelves outside my studio, and getting lost in the curiosities of the culture around me. It could have been logging onto Instagram and finding a yoga festival, where my translator Iris and I met a young British student called Jack. Or it could have been getting drunk in the rain one night with Jack and Iris, and being dragged into a hawker’s kitchen at 3 a.m. to help him cook up an order.

Whatever it was, China opened up to me eventually, and when it did, I discovered yuanfen (缘分). 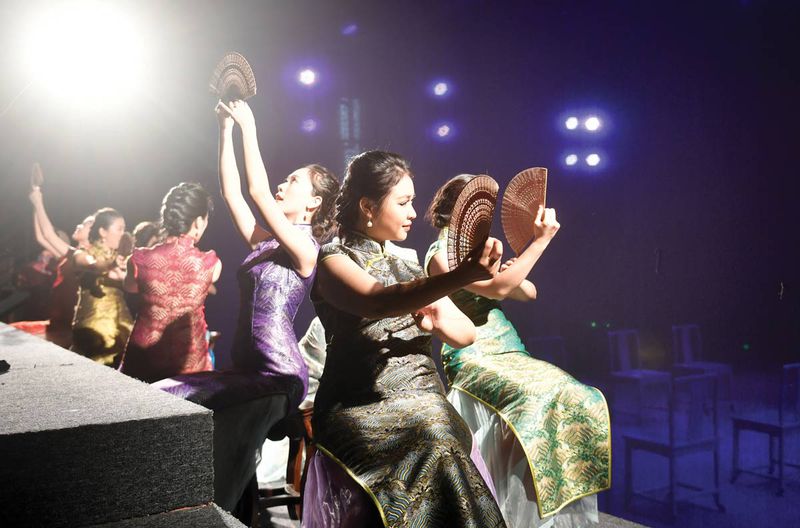 A performance of nanyin, an ancient Fujian folk-music style

By the time someone told me that yuanfen was a karmic force, akin to synchronicity, that brought people together at the right time, I had already experienced it without knowing.

One of my first interviews on Gulangyu had been about the phenomenon of abandoned buildings on the island. Because of the transient nature of a treaty port, the owners of homes on Gulangyu often had international links that they could make use of during the wars and upheaval of the 20th century in China. Sometimes, when they left, their title deeds disappeared with them, never to be found. Now, several vast estates lie crumbling and derelict, their ownership either untraceable, or split between too many competing claims. To me, these vine-covered structures were beautiful, yet symbols of the swiftness with which our lives go by.

I had interviewed a member of the buildings committee about these mansions, and he had shown me some of the existing building floor plans, which are kept in archives on the island. On my return to the studio that afternoon, Iris and I found three women hovering outside the door. They told us that they were sisters who had grown up there, guests of an owner who then disappeared to Australia. My studio was an abandoned building too.

Coincidences like this began happening to me so frequently that I grew to expect them. It seemed to me that yuanfen was like a current, and Iris and I were being carried upon it. We had no control over where it would take us, but it seemed benevolent in intent.

Everywhere we went, we met the musicians I sought for my project. A quick conversation outside an art gallery led to improvisations with a sound artist called Carp; the yoga festival led to songwriting sessions with a pop singer called Feinix, who had lived on Gulangyu before the tourist boom of recent years that made it commercialized and crowded.

Even dating apps seemed directed at my professional goals. My first match on Tinder was with a local synth artist, who had heard of a British woman going round the city looking for musicians. He soon joined my list of contributors. 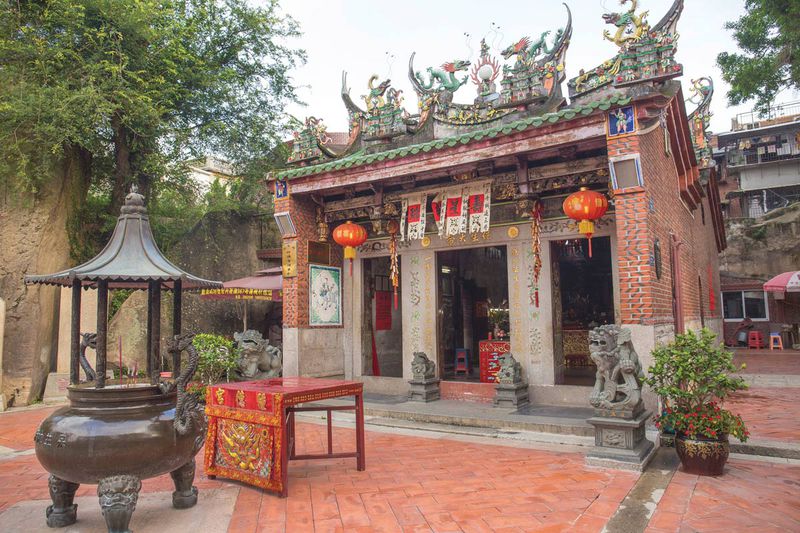 Zhongde Temple (Guanyin Temple) at the west of Gulangyu enshrines many folk deities, including the Guanyin bodhisattva

Yuanfen trained me to be open-minded, and ready to talk to anyone. Somehow muddling through the language barriers, I began to create a community in Xiamen, taking as my base a bar in the “Shapowei Art Zone” called Thank You Cafe.

Thank You is owned by a DJ called Dfu, a committed Buddhist and record collector who changed my musical perspective with his eclectic archives of spiritual folk and jazz. One day, when I told him that, despite my initial estrangement, there was something about me that felt like I belonged in China, he reminded me that there was a philosophical and spiritual heritage in China, and the East in general, that differed from that of the West, and might be contributing to this feeling. His words had a transformative effect.

I had begun visiting the Guanyin Temple, drawn in by the vegetarian food, and the many colorful depictions of the “goddess of mercy.” It struck me that this noisy, smoky temple, with its multiple altars, offered a totally different experience to the spiritual houses of England, where, despite my atheist upbringing, I would sometimes duck into a church for some peace.

In the Guanyin Temple, there was no binary code of good and evil, no judgement from above. Instead, I felt a great connection to the Earth, and to all the people on it. Dfu was right, there was a part of me that was thriving because of this feeling. I later wrote a song called “Guanyin Si,” describing the strange mix of emotions the first time I stood front of the altar.

Over the course of my month in Xiamen, I continued to visit the temple. I interviewed 20 brides. I went “undercover” to a matchmaker, to see if I was a lost cause (verdict: not entirely). I judged a surreal singing competition at the university. I became aware of a local fashion designer called Ms. Min, and learned about the philosophy behind her designs, inspired by traditional Chinese garments, crafts, and philosophical concepts such as qi. I wrote and performed with musicians for the album which will come out of the residency,  the first finished songs of which were played during the ceremony announcing Gulangyu’s successful bid for UNESCO World Heritage status in July. 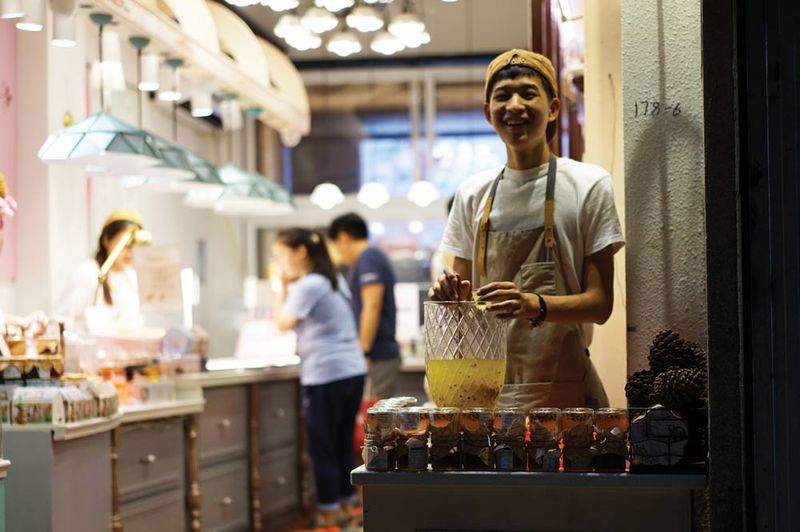 At the end of my last performance, attended by many of the people I had worked with and interviewed, a young girl wandered in, holding a puppy that I had secretly named Gulangyu Puppy. I had wanted to go see it one more time before I left, but could not find the alleyway where it lived. I should have known that yuanfen would deliver it directly to me.

The next day, before I left Xiamen, I bought a second-hand book from a Buddhist bookstore, a memento of my trip. When I arrived home, a friend had sent me her memoir. The epigraph was from Surfacing by Margaret Atwood—the book I’d bought in Xiamen.

I took this as a symbol of a bridge from my life in Xiamen to my life back home, a note from yuanfen that I could travel across it again, and I will.

“Fate, Play, Love” is a story from our issue, “Fast Forward”. To read the entire issue, become a subscriber and receive the full magazine. Alternatively, you can purchase the digital version from the iTunes Store.

Emma-Lee Moss is a contributing writer at The World of Chinese.