On a 44-meter mural in Singapore’s Central Business District, artist Yip Yew Chong unfurls over 150 years of Chinese migration. The mural spans the entire back wall of the historic Thian Hock Keng Temple, which Chinese laborers and philanthropist Tan Tock Seng built in 1839 to honor Ma Cho Po or Mazu, the goddess of the sea, for their safe voyage to Singapore.

Visited by hundreds of thousands of migrants who arrived, mainly from Fujian province, by a two-week boat journey, the Thian Hock Keng Temple was one of the earliest structures of the settlement that later became Singapore’s CBD. Before land reclamation projects expanded the district, the temple was on the coast. An accountant by day and self-taught artist by night, Yip began to paint murals in 2015. The Thian Hock Keng mural is the first to tell this migratory history, narrating a tale that begins with coolie laborers in the 1800s to the women from Sanshui, Guangdong province, who became construction workers for the first Housing and Development Board flats in Singapore. 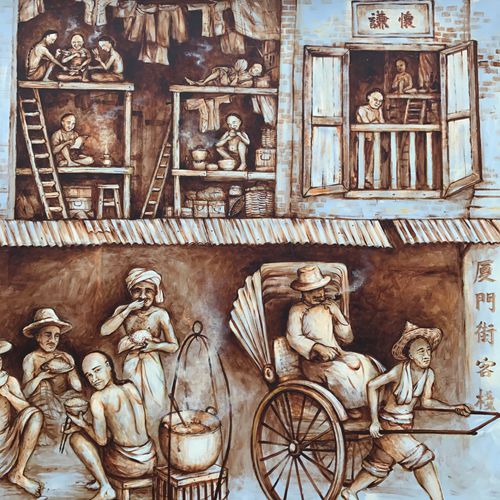 Having grown up in Singapore’s Chinatown, adjacent to the CBD, the mural also invokes Yip’s own heritage and history. “The Chinatown that I grew up in the 70s and early 80s was very raw, very authentic and cinematic,” he says. Day to day, the neighborhood Yip remembers was a “highly spirited” place with food stalls and open-air markets that are hard to find in the modernized city today. Imitating the style of Chinese scrolls, Yip tries to preserve relevant history for the present-day city.

“History just repeats itself. The workers coming into Singapore today are the same as the coolies before,” Yip reckons. We are sitting across from each other in the food court off the Dhoby Ghaut train station. Around us, Singaporeans getting off work are lining up at the mall’s stalls, serving a range of Chinese, Japanese, and Malaysian cuisines. “This moment right here, us eating in this food court with this environment around us—I guarantee you, in 10 years will not be here. That’s how fast this city is developing.”

The ephemeral nature of our environment reflects how Yip sees his work. Though paintings chip away and weather with the years, Singapore is being constantly remade before it can grow old. In addition to Thian Hock Keng, Yip has painted life-sized murals across the city depicting ordinary life in a bygone Singapore, recreating the roadside shops that used to line the sidewalks. He also pays tribute to history with his artwork of the kampongs, traditional Malay villages that have been made over to skyscrapers today. 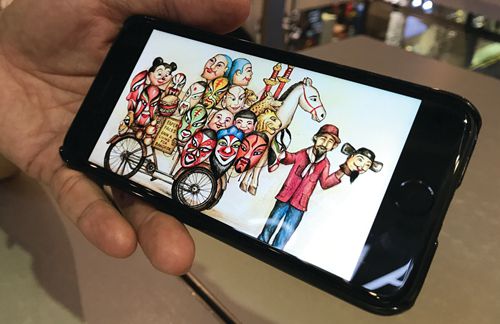 Yip is waiting for a government permit to paint these sketches of the Cantonese opera stage in Chinatown, where he saw many performances while growing up in the 1980s

However, it’s no easy task to etch history onto the cityscape. While the Thian Hock Keng mural was commissioned by the Singapore Hokkien Association, Yip has several projects and sketches he has yet to paint because he is still waiting for the government permits. One planned project involves paintings murals of traditional Chinese culture and lifestyles that migrants brought to Singapore.

Public murals around the world have become powerful tools to preserve a people’s history. In Malaysia, Russian artist Julia Volchkova was commissioned to paint a mural that pays homage to the Chinese workers in the tin mines of Kuala Lumpur. Arturo Ho’s “History of Chinatown” mural in Philadelphia documents the history of urban displacement in Chinatown as well as successful protests, including the victory against the construction of a new prison in the neighborhood. Together these public artworks tell the story of immigrant labor and its contributions to growing metropolises, to make sure these histories are never forgotten. 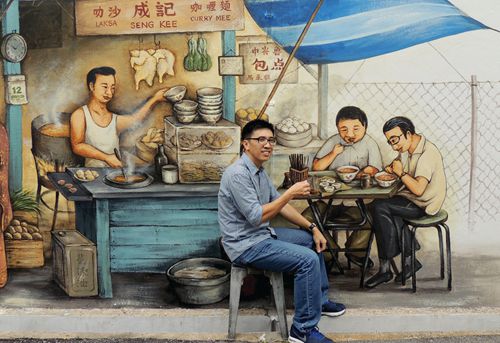 Yip’s (pictured) other work, such as this mural in the Tiong Bahru area, reflect Singapore’s multi-ethnic heritage

Migrant Murals is a story from our issue, “The Noughty Nineties.” To read the entire issue, become a subscriber and receive the full magazine. Alternatively, you can purchase the digital version from the App Store.