Viral Week is our weekly round-up of the weekend’s trending memes, tracking the rumors, humor, and gossip that Chinese netizens are chatting about. It’s like your heating finally getting turned on.

This week, Shandong approves menstrual leave, a police pooch is repeatedly palmed off, and a Chinese “herbal” toothpaste turns out to have a Western boost. But first…

The 39-year-old sociologist, who is a recipient of the prestigious Changjiang Youth Scholar award, went under the radar of plagiarism detectors throughout her career by periodically requesting her published articles be removed from catalogs. Of the 120 records located by China Youth Daily journalists, there were only 15 searchable articles, some of which had been submitted multiple times to different journals, and most of which contained examples of plagiarism.

Liang has confessed, but deflected the allegations with a telling statement: “If you keep investigating [fraud in Chinese academia] when there are so many academics out there, you’ll find everyone at fault.”

Ladies looking forward to a monthly vacation, though, should think again: Apparently, the new policy only grants the female employee one or two extra sick days per year, and only with a doctor’s note proving frequent or painful periods.

The law also provides leave or work exemptions for breastfeeding, pregnancy, and employees who experience morning sickness or a miscarriage. Given that Chinese employers frequently abuse laws meant to “protect” female employees in order to justify sexist hiring, we are sure that the controversies are only beginning.

A well-intentioned dog rescue has resulted in the investigation of a Zhejiang couple for “theft of state property,” as the friendly German Shepherd they’d found turned out to be a police dog worth 15,000 RMB.

In July, the couple, Mr. Zhu and Ms. Ying, saw a”dirty, thin, and smelly” dog picking through trash cans outside a police station in Jinhua. The dog was happy to leave with the couple, who were surprised when police came to their home to retrieve the animal, named Lao San; they now face possible charges.

However, Ying claims they saw Lao San loitering around the the trash cans again when they went to post bail; moreover, in May, an identical dog theft had been reported at the same location with a dog of identical description, and the father and son involved were given a 10,000 RMB fine and five months’ detention. Perhaps the police will keep Lao San on a shorter leash from now on.

In other dog news, Deng Deng, an abandoned Shiba Inu who has been raised by a Beijing “pet boarding school” for the last four years, is now up for online judicial auction by the People’s Court of Chaoyang District. According to the school, the owner hasn’t visited or made payments in two years. Bidding for “the world’s most pitiable dog” is scheduled for November 10, with a starting price of 500 RMB; already, more than 1,500 bidders have signed up.

Yunnan Baiyao’s advertising claims its healing powers come from a TCM recipe dating to the 19th century. In a now-deleted Weibo post from October 21, however, two medical practitioners point out that ingredients listed on the toothpaste’s packaging include tranexamic acid, a prescription drug often used to stop bleeding during surgery. “We checked many TCM toothpastes on the shelves. Many of them contain tranexamic acid. [TCM] might be totally false advertising. It’s only the tranexamic acid that works,” the authors later wrote on Jinri Toutiao. 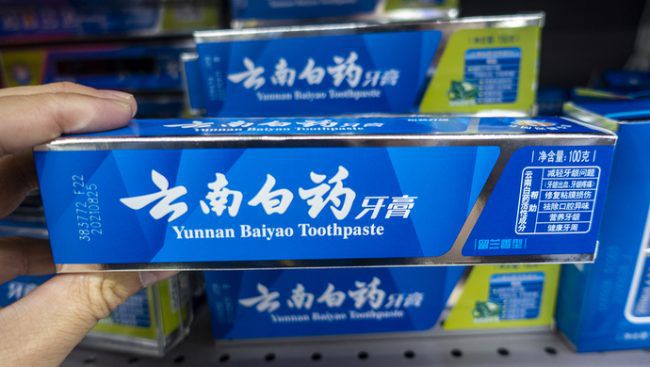 The infamous paste, which  (jfdaily)

Yunnan Baiyao has released a statement stating that their ingredients abide by Chinese and international regulations, and that tranexamic acid is widely used by domestic and foreign toothpaste brands. However, Changsha lawyer Liu Gao is now suing for an apology, an end to false advertising, and token compensation of 3.15 RMB, stating that it’s illegal for anyone other than a licensed medical practitioner to distribute prescription drugs.

Correction – October 29: An earlier version of this post stated that Liang Ying had obtained her degree at the University of Chicago. In fact, she had been a visiting scholar there, but claimed to have done her postdoc at the university in her CV.