In spite of crackdowns, the motorized tricycle is an essential transportation tool in urban and rural China

“In order to celebrate the 24th birthday of the People’s Liberation Army, to remember forever their heroic struggles on Jinggangshan Mountain,” announced acting PLA chief of staff Nie Rongzhen on August 3, 1951, unveiling five motorized bicycles, “this military-use heavy machinery push-bike shall be named ‘the Jinggangshan.’”

They may not have sounded particularly exciting, in Nie’s formulation, but the Jinggangshan would prove to be a triumph for modern Chinese engineering.

Lacking experience in manufacturing motorbikes, workers at the PLA No. 6 Automobile Plant had reverse-engineered the Jinggangshan by taking apart and copying the pieces of a German Zündapp K500. By 1954, though, the military was already demanding Jinggangshan brand three-wheelers in order to transport more people—and the bombastic original two-wheeler went out of production just a year later, as the motorized tricycle sputtered its way into Chinese transportation history.

These lessons in improvisation, adaptation, and understanding a vast country’s logistical needs are still relevant today: According to the Chinese Association of Automobile Manufacturers, 8 to 9 million electric-powered tricycles were manufactured in China in 2017, and 1.7 million powered by diesel, not counting push-tricycles illegally upgraded with motors by their owners. These vehicles serve important functions in both town and countryside, ferrying people and produce, as well as over 4 billion parcels per year—but also pose problems of safety, congestion, and unsightly aesthetics on China’s increasingly crowded roads. 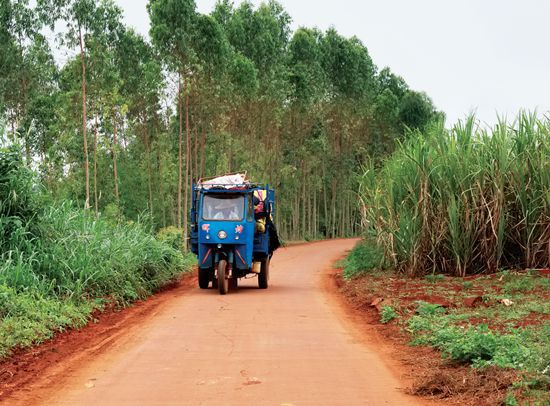 The tricycle wasn’t always a nuisance. In 1964, the Shanghai Motorcycle Factory was already making compact motorized three-wheelers, with an enclosed, bullet-like body, for passenger transport in cities including Shanghai, Beijing, Tianjin, and Shenyang. Photos from the 1980s show fleets of these two-seaters (which routinely squeezed in a lot more people) for hire as taxis in Shanghai, painted with official-looking livery.

For hauling bigger loads, the Jiangxi Ganjiang Machinery Factory began manufacturing its 750 Z series, the country’s first “large emission” motorized tricycle in 1969. The user manual featured a photo that would be familiar to rural-dwellers today: a boxy three-wheeler with an enclosed driver’s cabin and spacious bed for transporting goods, driving past verdant rice paddies. After reforms in the 1980s made it legal for farmers to sell surplus crops grown on their land, both human-powered and motorized tricycles—including new, electrified models—became essential for transporting produce, as well as villagers, to the city.

Passenger-tricycles are still putt-putting their way around cities today, many serving as unlicensed taxis, rather literally named beng beng (蹦蹦, “jump jump”) or sanbengzi (三蹦子, “jump tricycle”) due to the bumpiness of the ride. Similar to Southeast Asian tuk-tuks, beng beng are modified flat-bed tricycles with seats, a roof, side enclosures, and doors. They tend to congregate around train stations and suburban subway stops to serve commuters’ “last mile,” usually in areas without public transportation or late-night hours after buses stop running.

The beng beng also has a lookalike cousin, the “old-age scooter,” which isn’t normally available for hire but instead transports aging urbanites to the produce market and the park, and their grandchildren to school. 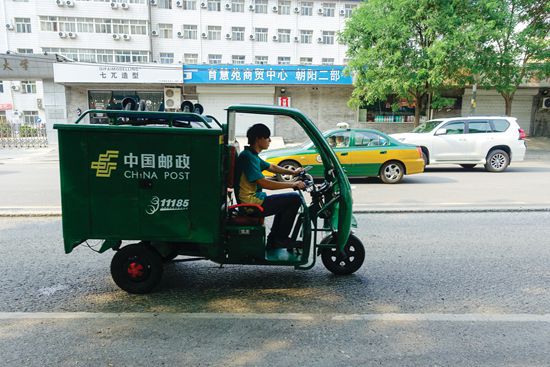 City-dwellers depend on tricycles for many services

Beng beng had their heyday in the first decade of the 2000s, when China’s urban sprawl outpaced the development of both public transit and law enforcement in suburban neighborhoods—according to motorcycle news portal MTUO and the CAAM, motorized tricycle production increased around 20 percent a year from 2005 until 2015, when it began to decrease.

Today, though, many cities are cracking down on the vehicles, citing concerns such as the impossibility of licensing or insuring tricycles for passenger transport under current regulations, or the lack of training or vehicle registration required to own and drive one. In 2013, the government of Shijiazhuang, Hebei, claimed that tricycles caused over 30 traffic accidents in the city per day, and prohibited both pedal and motorized trikes from driving inside its Second Ring Road and on major roads inside the Third Ring Road.

Yet even Shijiazhuang realized the futility of a total ban: Over the decades, tricycles had also become standard vehicles for water and gas delivery, couriers, the postal service, street sanitation, and other essential sectors. The government could only ask these public service tricycles to get new paint jobs and register with the city traffic control bureau, while promising closer inspections to make sure they don’t run red lights, drive in fast lanes, or break other traffic laws.

Meanwhile, the crackdowns invited dissent. A Ms. Sun told the People’s Daily that Shijiazhuang’s ban was going to raise expenses for small business owners like herself, who would have to hire vans to transport goods, rather than use their own tricycles “at virtually no cost.” Ordinary citizens pointed out the convenience of beng beng in small streets where buses can’t run, or neighborhoods without enough legal taxis. “The focus should be on making more traffic regulations for tricycles…rather than a simple ‘all or nothing’ approach,” complained a Mr. Ma. 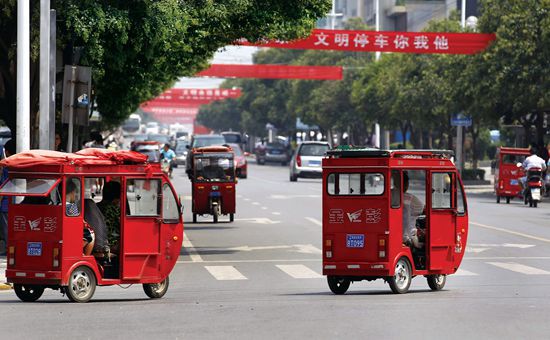 Then there are complaints from the drivers themselves, often rural-to-urban migrants attracted to the profession due to its flexibility and low barriers of entry. In 2014, beng beng drivers working the suburban Dalianpo, Guanzhuang, and Shuangqiao neighborhoods of Beijing reported monthly incomes of 4,000 to 7,000 RMB (average monthly income in Beijing was 6,463 RMB that year), and costs between 2,000 and 3,000 RMB to buy a secondhand tricycle (“a new one’s not worth buying [since] it might get confiscated,” one driver told Beijing Youth Daily).

The same year, Beijing began a citywide crackdown on tricycles, including both beng beng and three-wheelers modified for vending food or goods. Urban management (chengguan) officers were sent to 78 neighborhoods to confiscate unregistered vehicles and arrest drivers, with the eventual goal of banning diesel and electric tricycles inside the Sixth Ring Road.

In 2015, Li Fu, a driver in Fangshan district, injured three chengguan while resisting arrest, but got a comparatively light sentence of a year in prison after telling a sympathetic judge, “My mother is ill, my children are at school, and I drive a tricycle just to support my family.” (Other drivers don’t seem to be letting the still-ongoing raids affect business—“Take you somewhere on my way?” a driver near Dalianpo once shouted to TWOC while sprinting for his vehicle in anticipation of a police visit to the area.)

For the last two years, it seemed that bike-share apps might succeed where heavy-handed raids failed to finally drive tricycles off the road. Some beng beng drivers were reportedly vandalizing share-bikes parked in their turf. “The starting price for us used to be 10 RMB, but [with bikes], people can now travel for 50 cents to 1 RMB,” one driver told Beijing’s Morning Post.

Lately, though, the successive failures of bike apps like Coolqi, Xiaoming, Bluegogo, and, most alarmingly, ofo, have added another twist to the tale. As millions of defunct bikes get hauled out of Chinese cities to be trashed or recycled—on the back of large electric tricycles, no less—the scrappy three-wheeler may be having the last laugh.

Three Wheels Good is a story from our issue, “Home Bound.” To read the entire issue, become a subscriber and receive the full magazine. Alternatively, you can purchase the digital version from the App Store. “I’ve spent two-thirds of my life on the road”: A female tour bus driver speaks about working away from home and being a minority in a male-dominated field As ticket vendors disappear from China’s buses, their legend remains Behind the Wheel: Learn the Language of the Roads in China

From impatient driver’s ed instructors to common mistakes on the road, here’s a language guide to driving in China