Today is World Rat Day, for some reason—because the rodent is one of the most hated animals in almost every culture. In Chinese, any term with the character “鼠 (rat)” usually has a derogatory meaning. There are dozens of expressive chengyu that refer to rats, and almost describe dislikable personalities, behavior, or just appearances.

With a thief’s eyebrows and a rat’s eyes 贼眉鼠眼

Have you ever noticed what a rat’s eyes look like? Probably not. But the idiom 贼眉鼠眼 assures you that it’s not a good look. Literally translated as “with a thief’s eyebrows and a rat’s eyes,” this chengyu means “wearing a thievish expression,” or “looking like an sly old fox.” For example, when seeing someone suspicious:

I am afraid he is not a decent man, for his eyes are shiftly and his expression thievish.

A rat can only see one cun 鼠目寸光

The attack against rat eyes don’t stop there. Another chengyu, 鼠目寸光 implies that rats have poor eyesight. Ancient Chinese believed rats couldn’t see further than one cun (about 3.33 cm). This was compared to those who lack much foresight.

This person is just as short-sighted as a rat. 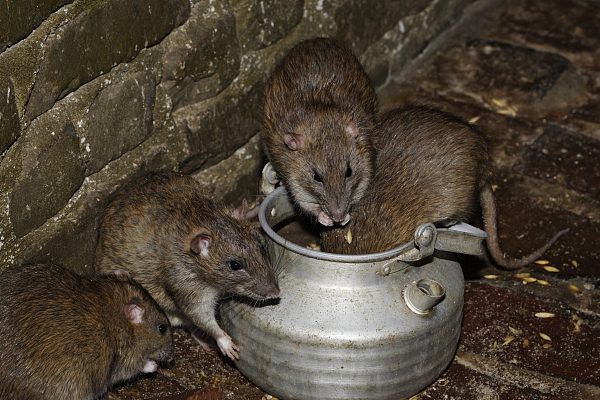 Craven as a rat 胆小如鼠

The rat is not considered a brave animal. They scurry when the lights go on, and generally flee the likes of humans or cats. In the eyes of Chinese, a rat is a byword for “coward.” The idiom 胆小如鼠, literally meaning “as timid as a rat,” is often used to express contempt for cowards.

Even the way a rat runs arouses contempt. Cowards who flee may be described as 抱头鼠窜, mostly used to refer to thieves hiding out from police.

In many cases, a chengyu can mention two different animals, such as when a rooster meets a dog, or a chicken scaring monkeys. If a rat is involved, the meaning is always bad.

With hideous features and shifty eyes; repulsively ugly and sly-looking.

The snake and the rat in the same nest 蛇鼠一窝

Bad people collude with each other.

The cat and the rat sleep together 猫鼠同眠

Corrupt officials allow their subordinates to get away with crimes as well.

If you can think of anything positive in rat-related chengyu containing a positive meaning, let us know—maybe we’ll fix the rat’s reputation another time.