On Top of Her Game

On Top of Her Game

When she first picked up Blizzard Entertainment’s online game Hearthstone in 2016, Li Xiaomeng was looking for nothing more than a brief respite from her strenuous law studies.

In the space of three years, she went from noob to professional gamer, and was crowned the winner of last November’s Hearthstone Global Championship at age 23.

Coming with 200,000 RMB in prize money, Li’s win was called a “landmark victory” for esports, as she was the first female to triumph at any of Blizzard’s annual BlizzCon tournaments. Fresh off her win, Li discusses the trajectory of her unusual career, as well as the growth of esports in China.

Did you always want to play games professionally?

L: Actually, no. You have to realize that when I was a little girl, China was at a very different stage of economic development, so I didn’t have access to video games. I grew up in a small city in Xinjiang Autonomous Region called Kuitun, which had less than 200,000 people. Once video games started to get popular when I was a bit older, it wasn’t perceived as a good pastime for girls, so I didn’t play much. I started playing Hearthstone when I was a university sophomore because I saw my friend play it and I liked the visuals. 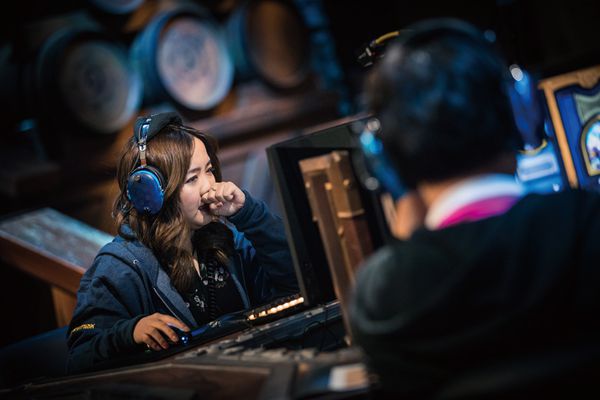 When did Hearthstone go from being a hobby to a career?

I attended my first Hearthstone competition in May 2017, but I wasn’t a player; I was a judge. There were so many people there! It was held at a convention center and there were over 2,000 competitors. Most were amateurs; there were only around 100 professional players, but I really admired them and thought about what it would be like to go pro myself.

Before I graduated from university, I participated in one of the China-based competitions of the World Electronic Sports Games (WESG). I came second in Hearthstone and I won 7,000 RMB. At the time, I thought that was a decent prize for a recent graduate, so I decided to move to Shanghai to play professionally.

What is the story behind your username “VKLiooon?”

VK stands for my team: Victory Key. When I first started Hearthstone, I had a different username that was very girly and cute. There are not many female players in Hearthstone and a lot of male players tried to add me as a friend, which I found quite disturbing. So, I decided to change my username to something more gender-neutral. I really liked a song by the Korean group Girls’ Generation called “Lion Heart,” but I thought that lions can be kind of boring, so I added two extra O’s to make it special.

In your victory speech, you mentioned an instance when you were told by a male player that esports wasn’t for women. In China, what sorts of barriers exist for women in esports?

I think that female players are looked down on because women are considered bad players. I think that gender discrimination in esports is a global phenomenon; but it is probably worse in China. There are many stereotypes in China that women can’t do well in certain professions—esports is just one of many.

“Just forget your gender,” Li said during her victory speech

One of the biggest challenges I face based on my gender is that people in China just comment on my appearance and my figure, rather than my ability to play Hearthstone. I was really moved by the Hearthstone fans in the United States. They were so supportive of me! On Weibo, I read mostly comments on my looks; on Twitter, I see a whole lot less of those.

What has been the biggest challenge in your career?

My biggest challenge has been my father. During university, my major was law because my father is a lawyer and wanted me to follow in his footsteps. Needless to say, he didn’t agree at all with my decision to pursue a career as a professional player. He called me so many times to try to change my mind—to the point that I blocked his number. I’ve since unblocked him, but my dad has never called me again. I heard from others that he shared the articles of my big win at the championship; so I guess he is proud of me. But he still hasn’t called.

What sort of preparation is necessary to do well in esports?

Esports requires a lot of teamwork and I rely on a lot of outside help during the training process. There are three main ways to practice Hearthstone. The first is deciding which cards to combine and in what series and sequence, which is called the “lineup.” Technically, I can do this alone, but to save time, my team members often help me. The second is practicing the lesser-known card combinations to determine their winning rate. The last way to practice is by having mock competitions. For this, I often rely on my boyfriend [Fan Yilun], who is a Hearthstone player for the Chinese gaming league, Invictus Gaming. He is not only my boyfriend; he is also kind of my coach!

What misunderstandings do people often have about esports in China?

Most of the people who play esports in China are college students, and they typically come from larger cities. Esports require skills in calculation, computing, prediction, and planning. People need a certain level of education or intellectual capability to play well.

It isn’t just the number of players that is growing, but also the number of esports fans. Over the past two years, Chinese esports teams have gotten better and better results in global competitions. Because of this, esports are becoming more accepted domestically by both the public and the government. You are starting to see parents showing support for their kids playing esports. But even so, I normally just tell people that I have a gaming-related job, rather than that I am a pro player. It can be difficult to explain.

What comes next for you in your career?

I’ll keep playing Hearthstone. I think it works for me because it requires logic and I am kind of slow at games that require speed. I plan to keep participating in Chinese and international competitions. Eventually, I would like to become a Chinese esports commentator. Most of the current female commentators are there just because they are beautiful, not because they have insightful comments about the games. I would like to change that.

On Top of Her Game is a story from our issue, “Alpine Ambitions.” To read the entire issue, become a subscriber and receive the full magazine. Alternatively, you can purchase the digital version from the App Store.