Gallery: Sand and the City

Gallery: Sand and the City

Beijing’s An Art Museum sits on the eastern edge of the city in a neighborhood with more construction sites than finished buildings. Opened in October 2019 in the still-incomplete New Everbright Art Center in Tongzhou district, it’s a testament to the city’s effort to urbanize its suburbs, set in motion by the migration of several municipal government offices to the district earlier last year. 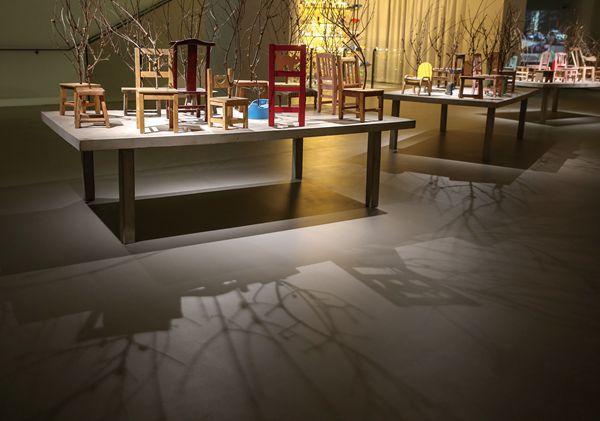 Tailor-made to this setting is the museum’s inaugural exhibition, From the Margins to the Middle: Urban Symbiosis Project, which features works by 13 primarily Chinese artists. Through a range of media, the exhibition explores humanity’s relationship to nature and the way we build our environments—from children’s chairs placed on ping pong tables, symbolizing the vulnerability of children in poor or war-torn areas, to a video series of members of the Asian diaspora discussing their relationship with plants.

Guangzhou performance artist Lin Yilin’s “The Departure from Her Feet” provides a unique perspective on urban living from the ground up. Through videos and a series of photographs, the artist lies down on the sidewalk in Bienne, Switzerland, and slowly rolls himself to the city’s major landmarks, followed by a small film crew. The highlights, however, are the still shots that show how Lin is ignored by most passersby and absorbed as another oddity into the city. One photo shows a dog and its owner peering at Lin from above, two of the only witnesses to his strange performance. The narrow outlook of urban pedestrians is on full display, then subverted by Lin’s perspective of what a city looks like as it spins by above his head. 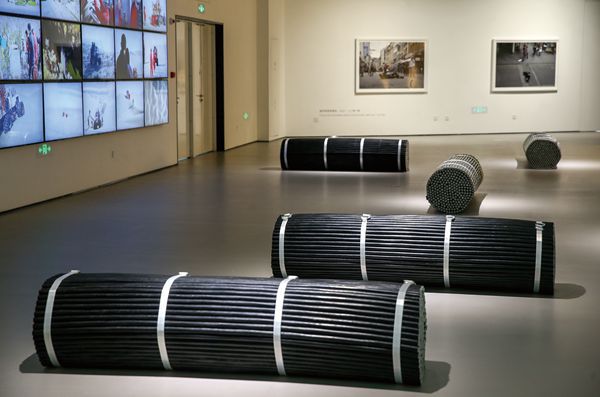 Other pieces depict urban environments without showing cityscapes at all. Xinjiang artist Zhao Zhao’s “Project Taklamakan” is a set of screens that simultaneously play videos of a construction crew carrying an electric cable 4,000 kilometers into the middle of the Taklamakan Desert to power a refrigerator full of beer. The contrast of the workers’ red suits against the expanse of sand is mesmerizing, but it is the scenes of the crew dancing and laughing in between their tasks, and sitting down with local children to eat flatbread and grilled meat, that hold the viewer’s attention the longest. In trying to bring a quintessential urban comfort to the desert, the hubristic human impulse to conquer our environment is overshadowed by nature: the endless sand dunes, the sky, and the joy of people.

Expanding on the theme of urban-nature interaction, Beijing sculptor Zhan Wang’s “Rockery 167#” is a stainless steel replica of a rock formation like those found in traditional Chinese gardens, a play on the idea of creating artificial rockery from real stones. Zhan’s other piece, “Morph No. 3,” completes the cycle by presenting the artist’s reflection, rendered in marble, from within the stainless steel sculpture, mimicking actual garden rockery. Together, the pieces suggest that just as humans have the impulse to bring the urban into the depths of the desert, we are also constantly recreating nature in our cities.

At its core, From the Margins to the Middle is about searching: for the natural in the urban, the urban in the natural, and new perspectives on both. In the process, it reveals that the natural and the urban exist in a loop, with humans constantly searching for one within the other, never satisfied with either.

Gallery: Sand and the City is a story from our issue, “Alpine Ambitions.” To read the entire issue, become a subscriber and receive the full magazine. Alternatively, you can purchase the digital version from the App Store.

Lily Hartzell is a contributing writer at The World of Chinese.