Due to the Dead

Due to the Dead

China’s 2,000-year-old Book of Rites: Funerary Rituals《礼记·问丧》states: “In making sacrifices, people bury the corpse, while at the same time recall the soul of the deceased (送形而往，迎精而返也).” Since at least prehistory, Chinese burial customs have been part ancestor worship, part tribute to ghosts and spirits (鬼神).

These days, the Zhongyuan or “Hungry Ghost” Festival on the 15th day of the seventh lunar month (usually mid-August in the solar calendar) is dedicated to the latter. The Qingming or Tomb-Sweeping Festival in the third lunar month (April 4 in 2020), however, is a little bit of both.

Ancient Chinese believed that supernatural spirits played huge roles in controlling the fate of the living. The first systematic description of the underworld emerged within Daoism during the Han Dynasty, and the concept of hell (地狱, literally “earth prison”) was later fleshed out when Buddhism came to China around the first century CE.

According to this doctrine, there are 18 Layers of Hell, distinguished by the degree and type of torture they inflict on the spirits of evildoers (the 18th level being the most severe). In these prisons of the afterlife, deceased wrongdoers are brutally punished by Yama (阎王), the king of hell, and his lackeys (小喽啰); eventually, they fall into the “animal layer” of the Six Divisions of Karma (六道轮回) and reincarnate as beasts. Belief in ghosts and the afterlife was thus instrumental in advocating for people to practice good deeds in life. Ancient legends describe Fengdu (丰都) county, in present-day Chongqing, as a settlement of the spirits of the deceased. This “ghost town” was said to have a “Road to the Underworld” (黄泉路) with many palaces and temples, where tens of millions ghosts are questioned about their deeds on earth before they can pass on to the afterlife. Today, a tourist attraction named Fengdu Ghost Town replicates these scenes of the underworld, with temples explaining the culture of ghost worship.

Huangquan (黄泉), literally “yellow springs,” is another Chinese word for the underworld, believed to derive from the fact that water appears yellow when it is deep. The mythical huangquan is so deep, in fact, that it’s usually said to consist of nine wells one after the other, giving rise to yet another term for the underworld, “jiuquan zhixia (九泉之下, under the nine springs).” An idiom for people dying after performing good deeds was “Dying with pleasure (含笑九泉).”

While the dead reside in the ground, “Three feet above the livings’ spirit lies sacred deities (三尺之上有神明),” as a Chinese saying goes. Deities may live in the sky as 天神 (heavenly gods) or reside on earth as 地祇 (earth gods). In between the deities and the dead are human spirits (人鬼) who return from the underworld to either bring blessing or wreak havoc among the living—and this is the category all ancestors fall into.

To appease these meddlesome forebears, people had to show reverence to their spirits in the same Confucian spirit of filial piety as when the ancestors were alive. Thus, they worshiped at the tombs of deceased family members during the Qingming Festival: often making reports of their undertakings over the past year, cleaning the tombs, leaving or burning offerings, and requesting the spirits’ blessings. 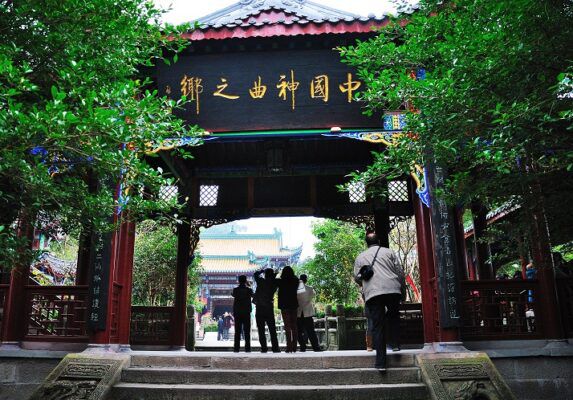 Both meteorological and cultural factors led this tomb-sweeping ritual to fall during the spring. Du Mu (杜牧), a Tang poet, wrote in “Qingming” or “On the Day of Mourning”: “Drizzling rain falls like tears on the day of mourning (清明时节雨纷纷).” Qingming, also the fifth solar term in the lunar calendar, coincides with warming temperatures and increase of rainfall. This leads to balmy weather and blossoming flowers that make people eager to take trips to the countryside, where most tombs are located. Up until the Tang Dynasty, Qingming was the ancient Chinese equivalent of a bank holiday, on which officials can leave their posts for four to seven days of mourning.

Over the centuries, the Qingming Festival has absorbed some traditions from the more obscure Cold Food Festival (寒食节, one day before Qingming) and the Double Third or Shangsi Festival (上巳节), which falls on the third day of the third lunar month and was traditionally celebrated by going on “spring excursions.”

Burning ghost money (冥钱) made of paper or cloth, another major custom in Qingming, has also seen some adaptations over the years: Originally a way of sending ancestors funds for spending in the underworld, or bribing ghost lackeys so they may reincarnate again as humans, the offerings have recently started to include fashionable items like paper iPhones, computers, and miniature models of luxury cars. Even dying, it seems, can’t cure some people of the need to show off.