Each evening at 7 and 8:30, the world’s longest running movie flickers to life in the mildewed darkness of a 19th century chapel on its namesake mountains. Since 1980, Romance on Lushan has played continuously in this makeshift cinema, adding a Guinness World Record to Lushan’s already formidable share of lore.

“Tourists ask at every destination in China, ‘Which ancient luminary has visited this place before?’” “Uncle” Ye, the owner of a small hiker’s inn at the base of the mountains, declares on the night of my arrival. “At Lushan, it would be easier to ask which luminaries haven’t been.”

He is warming up to the dramatic lecture he gives his guests every night on how to cheaply and efficiently cover the growing list of attractions on this UNESCO site in Jiangxi province, and avoid tourist traps, because “there are simply too many different versions of Lushan to discover.” 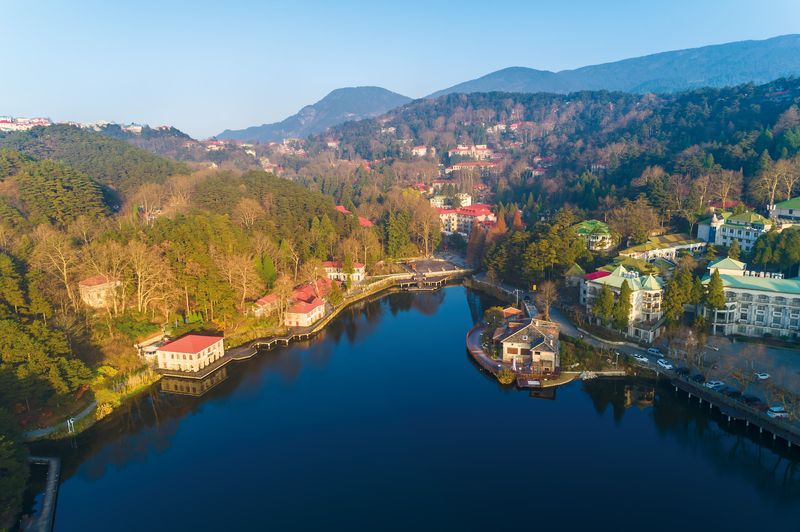 Uncle Ye is not the first to suggest this. In 1084, Song dynasty poet Su Dongpo (苏东坡), one of the aforementioned luminaries, sojourned at the Xilin Temple at the base of Lushan, also known as Kuangshan (匡山) and Kuanglu (匡庐), there, he penned the verse immortalized in every third-grade language textbook in China: “From the front it resembles a mountain range; from the side, a single peak./ Near and far, high and low, no two views are the same./ I do not know the real shape of Lushan/ Because I am within the mountain.”

Before Su, the Tang dynasty’s Li Bai (李白) made five trips to Lushan, rhapsodizing one of its waterfalls with the equally famous “Plunge of 3,000 feet/ Like the Milky Way falling from heaven.” Fellow Tang poet Bai Juyi (白居易) lived as a hermit on the mountains, writing, “I regretted that spring had gone without a trace/ Not knowing it had moved up here.” Ye calls Lushan the “original wanghong destination,” comparing it to the over-exposed “internet celebrity” tourist sites that litter Chinese social media today: “All the ancient literati would ‘check in’ here.”

Lushan likely owed its ancient popularity to its location. Situated less than 20 kilometers south of the Yangtze River, the mountains were a convenient boat journey from the cultural hubs of the Jiangnan (“River South”) region—Suzhou, Hangzhou, and others. Visitors would disembark at the port of Jiujiang, then known as Xunyang (浔阳), and lodge at the many temples that dotted the mountains’ base. 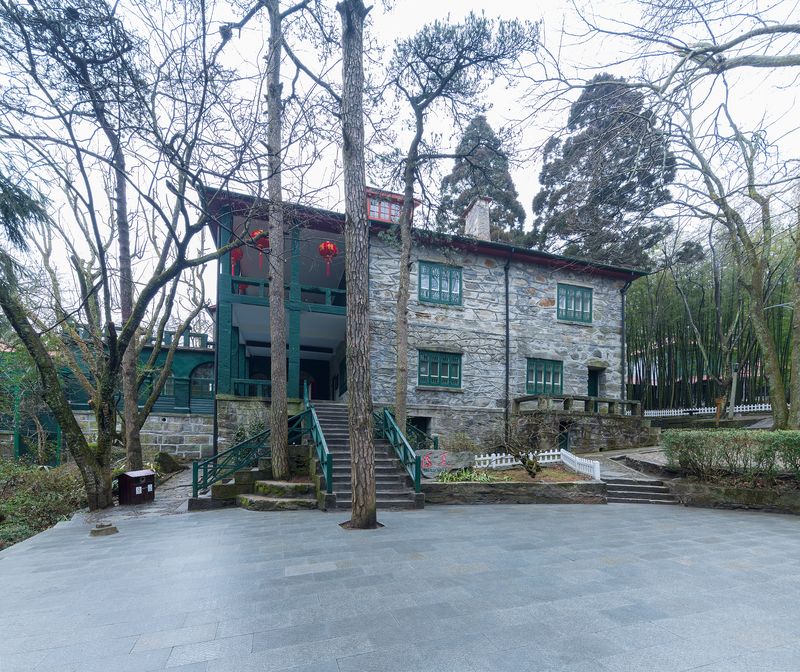 Lushan’s cool air and proximity to Jiujiang—by then a treaty port opened to steamships from around the world—also inspired a British missionary-turned-tycoon named Edward Little to turn it into a fashionable summer resort for foreign families in 1895. Calling his new enterprise the “Kuling” or “Cooling Estate,” a wordplay on the name of the nearby Guling (牯岭) Ridge, little obtained a perpetual lease from the local magistrates for 30,000 acres of relatively flat land on Lushan’s summit, which he subdivided into lots to sell.

Families and religious organizations from over 20 countries eventually built villas, churches, schools, and tennis courts on these mountains. Nobel Prize-winning author Pearl Buck summered here with her family throughout the early 1900s, describing Lushan in her autobiography as “a kind of beauty I knew nowhere else.” Most of the families were carried in sedan chairs up the “Thousand Steps”—a rather literally named trail built by Kuling’s developers as the quickest way to the summit, now a popular climbing path known as the “Hero’s Slope.”

Mindful of Su Dongpo’s dictum, though, I was determined to see the whole of Lushan: from far to near, ancient to modern. Accordingly, the next morning I bypass the Hero’s Slope for Shimenjian (“Rock Gap Ravine”), a western entrance to the mountains that dates back to at least 1393—but which now, it turned out, was located inside a privately owned “scenic area” that demanded a separate ticket from Lushan itself. Lying adjacent to the Xilin and Donglin temples on a tributary of the Yangtze River, the ravine was visited in 1618 by the intrepid Ming dynasty backpacker Xu Xiake (徐霞客), who described it in his memoirs.

“The whole path winds through gaps in the rocks and cliffs and peaks; one looks down on majestic ravines and innumerable summits,” wrote Xu in his typically fearless way, taking frequent detours off the path in favor of death-defying scrambles over mammoth boulders. Yet he found beauty, despite the danger: “[The peaks] rise from the ravine bottom like spires, standing close together, all competing in magnificence…Below, [the waterfall’s] spray of snow and thunder soar into the air; it’s ecstasy for the eyes and ears.”

Though Ye had warned me not to expect too much of Lushan’s natural scenery, calling it “tame” compared to the vertiginous cliffs and clinging pines at Anhui’s Huangshan Mountain, or Huashan Mountain in Shaanxi, Lushan’s waterfalls are deservedly renowned. A folk saying ranks them as one of four “natural wonders” of ancient China, alongside Huashan’s peaks, Huangshan’s clouds, and Taishan’s trees. There are about 20 named falls in total, and many more unnamed trickles that burst spontaneously from the rock at each turn of the trail, fed by the humid air that forms over nearby Poyang Lake and shrouds Lushan in mist for nearly 200 days of the year.

A dry summer had somewhat dampened the grandeur of the Qinglong Falls at Shimenjian, but there were still plenty of visitors mugging for photos underneath the spray of the cascades. The path becomes nearly vertical at this point, making me cover the final two kilometers in a hand-assisted scramble (though still more cheerfully than the hikers coming in the opposite direction who, bereft of Ye’s advice, had bought round-trip bus or cable car tickets to Guling Town and must now climb down to see the falls, then back up again). 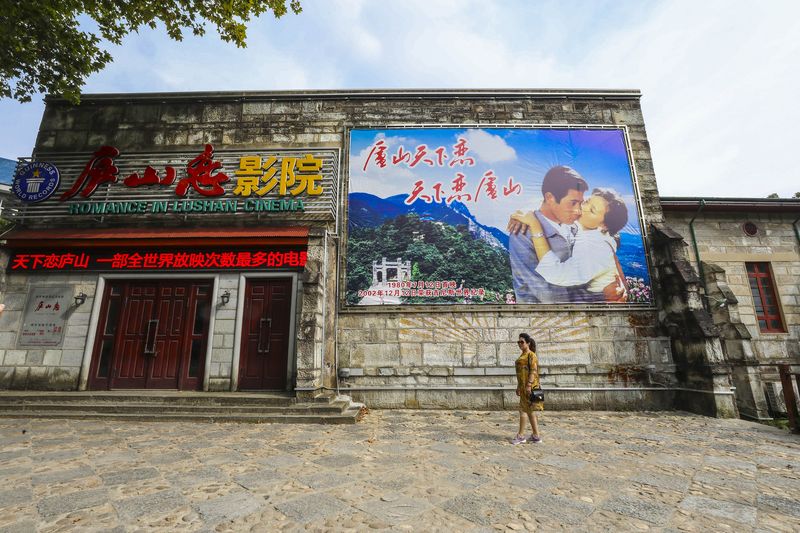 “Romance on Lushan” has played continuously at this cinema since July 12, 1980 (VCG)

I eventually reach Dragon’s Head Cliff, the first landmark on Lushan proper, breathless, and with a decision to make. It’s no wonder that travel itineraries are called gonglüe (攻略), literally “plan of attack,” in modern Chinese, and that Ye feels he must expound them every night: Lushan’s summit is divided into the “West Valley” and “East Valley,” cultural landmarks pertaining to the literati and colonial history of the mountain, respectively.

Confusingly, these are separate from the “West Line” and “East Line,” natural sights and panoramic lookouts on Lushan’s numerous peaks, including Shimenjian and the ever-popular Sandiequan (“Three Cascades”) Falls. At the mountains’ base, temples, caves, and the White Deer Grotto Academy, a renowned 10th-century place of Confucian learning, round out the litany of attractions. It would take at least a week to visit everything.

Having tasted the mountains’ natural and ancient heritage, I opt to spend the afternoon at the original Kuling Estate in the East Valley, pausing only briefly at the literati landmarks en route—such as Bai Juyi’s beloved cottage and “flower path,” which are in any case better viewed in spring when the peach blossoms are in bloom. The community of Guling, which calls itself “China’s only mountaintop town,” is a convenient halfway point between the valleys, maintaining an antique charm with its multiple roadside parks, old-growth trees, and former villas housing supermarkets, restaurants, and hotels.

The developers of the Kuling Estate had given their purchasers free rein to build mansions according to their own design, and today the East Valley is a hodgepodge of architectural heritage, with American cottages lying cheek-to-jowl with French chateaux. The visitor experience at each, too, varies: One can sit in worshipful tranquility at the moss-covered Episcopal Church, adjacent to Buck’s comparatively little-visited home—or jockey with busloads of other tourists to view the bathrooms of Chairman Mao Zedong, Premier Zhou Enlai, or First Lady Soong Mei-ling at their respective former dwellings.

In 1934, Soong acquired one of the Kuling mansions, marking the start of Lushan’s political importance to modern China: It was at this summer home that Soong’s husband, Republic of China president Chiang Kai-shek, declared war against the Japanese in 1937. He also met here with Zhou to discuss an alliance with the Communists. Chinese leaders continued to use Lushan as a “summer capital” after the PRC’s founding, recuperating inside its mansions, and holding three “Lushan Conferences” from the 1950s to 70s—including the disastrous 1959 edition, when Mao decisively rejected other party leaders’ criticisms concerning the Great Leap Forward.

The auditorium where the ’59 conference took place has been kept eerily intact from its appearance in the infamous news reel where Mao repudiated his most ardent critic, Peng Dehuai; even the leaders’ name-plates and teacups are still sitting on the time-worn tablecloths, as if their users might stroll back in shortly from a break. As I leave the building, one of Lushan’s ubiquitous mists descends, suddenly dropping the temperature by 10 degrees, and sending day-trippers running for the return bus to Jiujiang—and it’s easy to continue imagining that ghosts from all those periods of Lushan’s past could walk out of the fog, still sprouting the immortal phrases they contributed to the story of the mountains and of China itself, for better or worse.

In the evening, I watch Romance on Lushan in the lobby of a Guling hostel run by a friend of Ye’s called Xifeng, who offers his guests this free alternative to the nightly Guinness Record screening at the old chapel. We giggle at the dated dialogue (“I love my motherland,” the young lovers intone by way of flirting) and at how the characters seem to transport themselves in the blink of an eye from one scenic spot to another, when the same journey had taken us all day.

Xifeng, meanwhile, pokes gentle fun at our need to make the journey at all. A photographer came to stay once, he says, who was bent on capturing the sunrise from Hanpo Peak. Unfortunately, it rained all of his first week, followed by a week of snow, and then another week of sleet. Taking pity, Xifeng gave him his fourth week for free, and the man finally got his shot. “It was one of the best photos I’d ever seen,” Xifeng admits, but, “what a stubborn fool!”

I decide to be a fool. The next morning, I set out after sunrise for a nearby pavilion in hope of catching the “cloud cascades,” a rare meteorological phenomenon where the wind sends clouds tumbling into the valley like one of Lushan’s iconic waterfalls. Several other travelers are still there, looking in vain, by the time I finally give up and prepare to descend the mountain mid-morning.

Back at the hostel, Xifeng is laughing. “I said there was no point in waiting; you’re either lucky enough to catch it, or you aren’t.” But, he concedes, perhaps one loses perspective after living too long on the mountain. “I like talking to travelers; I see it fresh through their eyes,” he says, and I think perhaps that is what Su Dongpo had meant all along.

Celebrity’s Summit is a story from our issue, “Alpine Ambitions.” To read the entire issue, become a subscriber and receive the full magazine. Alternatively, you can purchase the digital version from the App Store.