Street vendors are making a comeback to China’s post-Covid-19 economy, but face an uncertain future

After Premier Li Keqiang called for Chinese cities to invigorate their “street stall economy” (地摊经济) in May, Chinese social media flooded with jokes that the chengguan, urban management police notorious for their violent confrontations with roadside vendors, would be calling up the sellers they had previously shut down to beg them to get back into business.

A stall owner from Ruichang, Jiangxi province, really did receive such a phone call from the police last week, who promised the city would designate two commercial areas for street sellers while the flabbergasted vendor protested, “Are you lying to me? It’s too good to be true!”

On March 20, as the economic fallout from Covid-19 became severe, China’s State Council urged local governments to adopt measures to stabilize employment, including initiatives aimed at vendors without fixed business premises. According to the Ministry of Human and Social Affairs, only 3 million people found new employment during the first quarter of 2020, 950,000 less than last year.

The so-called “street vendor economy” policy aims to create jobs lost during the pandemic by encouraging business to operate along the roadsides in designated areas. A version of the policy first appeared on March 14 in Chongqing, and was brought up during the Two Sessions political summits in May. The presence of roadside businesses, street vendors, and mobile vendors were also excluded from the central government’s “civilized city” planning index for 2020, meaning they are no longer considered eyesores that could disqualify cities from receiving the designation.

This new strategy, a reversal of long standing policies that actively discouraged street sellers from operating, has now been implemented by more than 27 cities, which allow roadside stalls, organized night markets, and other mobilized small businesses to operate. By May, Chengdu had designated more than 2,234 roadside business areas, 82 promotion areas on streets near large shopping malls, and 17,891 vending spots, creating more than 100,000 jobs, the city government claimed. On June 4, shares in companies selling catering equipment and vans for roadside businesses met their daily limit for stock price increases four times in a row.

However, conflicts between city management and roadside business are still a concern. “I only got to put up my stand for one night before the night market was called off,” a vintage jewelry vendor who joined a spontaneous night market on Saturday in Zhengzhou, the capital of Henan province, told TWOC. “I heard it was due to environmental reasons. Many vendors were careless, and many consumers too; they left trash everywhere.”

Over the weekend, Beijing authorities also refuted the existence of a “Beijing Vendors Map” that allegedly showed areas in the capital that have been approved for roadside businesses. The Beijing Daily and state broadcaster CCTV both published editorials arguing that roadside vendors are unsuited to the image of the nation’s capital. “Dirty streets, fake products, loud noises, traffic jams, unhygienic and uncivilized environment: We can’t allow these persistent diseases return to the city,” the Beijing Daily’s editorial stated.

In 2017, after a deadly fire in Daxing district, Beijing city officials conducted their biggest ever urban “clean-up” movement, during which many cheap apartments were demolished and roadside businesses shut down. Since then, Beijing has seen a lower year-on-year increase of its migrant population, which include many street vendors.

This apparent reversal in the government’s attitudes toward its so-called “low-end” population has made many skeptical, with netizens claiming that vendors are being “used” to boost the economy by city officials who have antagonized them for years. “Many recent articles have been using words like ‘low-end population’ and ‘Beijing fight back’ to describe the potential conflicts that this economic policy might bring,” Sun Jiashan, the director at the Marxist Literary Theory Institute of Chinese National Academy of Arts, tells TWOC.

However, “these are just binary oppositions that don’t bring much value to the conversation,” Sun argues. Instead, he believes that first-tier cities like Beijing and Shanghai don’t need street vendors to boost their economy, whereas smaller cities, which are losing their population to big metropolises, could adopt a roadside economy to boost their “nighttime consumption,” as well as create job opportunities closer to home for potential migrant workers. 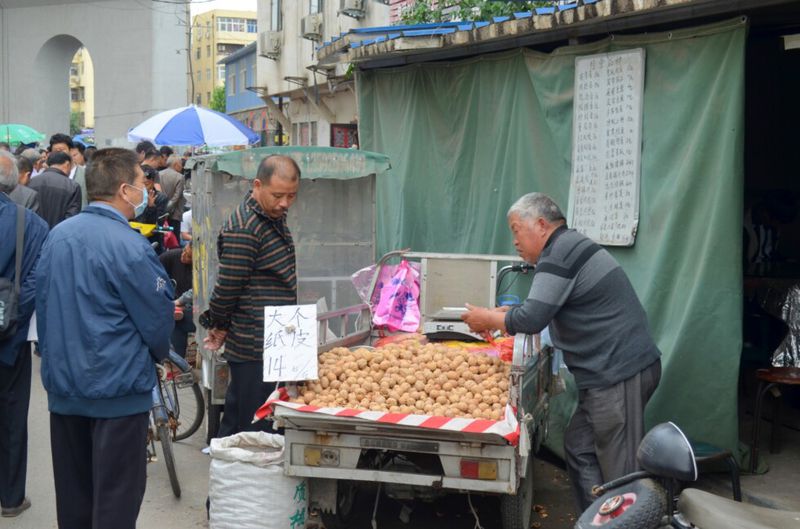 “This is a new stage of urbanization for [second and third-tier cities],” says Sun. “Unlike many developed countries, China still has a chance to help small cities to further urbanize themselves instead of persisting with the model which sees the majority of the population and economic activitiy become concentrated only in major cities.”

The Zhengzhou vendor, who wished to remain anonymous, tells TWOC that she and most of her fellow street sellers are owners or employees of established businesses who are trying to promote their products, rather than those making a full-time living from their stalls. An organized night market TWOC visited in a Beijing shopping mall had dentist offices and cosmetics firms advertising their products, alongside vendors selling trinkets and bags, whereas a night market organized by an office park in Shanghai invited environmental NGOs to set up booths alongside regular vendors.

Sun Kuo, a toy vendor in Shijiazhuang, the capital of Hebei province, tells TWOC that he has a day job, but chose to set up a stall after work simply to have something to do in his spare time. “Our city management officers have marked an area for small vendors to sell stuff, and we are required to remove any trash that we produce,” he says.

Public safety remains a concern. The Zhengzhou vendor complains that a customer walked off with one of her rings before she even opened her stand, though she did not see any police or chengguan around. In Tianjin and in Jiangsu province, firefighters joined the night markets with drones, broadcasting fire safety slogans in an attempt to limit fire hazards in the crowd.

“The street vendor economy poses real challenges of governance capability for community-level and local governments,” Sun Jiashan, the scholar, says. “How do they do this right, so that small vendors can make money and cities can maintain good public safety at the same time? The local governments need to modernize their governance strategy and system.”

Many facets of street vendors’ business operation are yet to be clarified, including making sure that vendors have licenses to sell their products, and pay tax on their revenue. Sun Jiashan says that as the world enters a recession after the pandemic, street vendors are just one facet of the economy that the Chinese government will support to help business owners weather the storm, and “A single medicine cannot cure all diseases; you can’t put too much expectation and attention on this one single policy.”

The Zhengzhou vendor has now seen another night market in her city close down, then reopen under the management of a shopping mall, which requires vendors to pay a registration fee but will provide a table for each registrant. “In the beginning, when it was spontaneous, it was very chaotic and dirty, but now it’s like a fair you might see in a park abroad,” she says.

“As long as it doesn’t interfere with traffic, and isn’t too dirty, I hope that the ‘street stall economy’ can continue,” she adds. “As an ordinary person, I think visiting street stalls is a part of life; it’s intimate and cozy.”