The humorous Zhejiang news program with a star-making reputation

“Young Zhang” was a regular man with an ordinary grievance: an allegedly faulty shower door had left him with injuries, and the property management company had refused to pay medical bills that came to 8,000 RMB.

Zhang, a resident of Ningbo, Zhejiang province, suffered lacerations to his hands when the glass door shattered on September 8. The seemingly mundane story would probably have been nothing more than a footnote in local media, but that was before Zhang agreed to an interview with 1818 Huangjinyan (“Golden Eye”), a popular news outlet with a reputation for making ordinary stories go big.

At the time of writing, the hashtag “Young Zhang cut his hand on the shower glass door” has been viewed over 1.7 billion times on Weibo. Zhang’s striking good looks had something to do with his popularity: “Zhang is so handsome that [the accident] must not have been his fault,” one user commented on the news. Zhang’s own Weibo account now has 270,000 followers, compared with just a few hundred before the incident.

Zhang is not the first victim of injustice that 1818 Huangjinyan‘s reporting has transformed into an internet star. In 2018, a man named Wu Zhengqiang became a meme known as “Hairline Boy” for his bemused expression, distinctive hairstyle, and thick eyebrows. Wu, who had just arrived in Hangzhou from rural Zhejiang province, was interviewed on the show after a hair salon presented him with a bill for 40,000 RMB for multiple beauty services that stylists had led him to believe were free.

Produced by state-controlled Zhejiang Radio and Television Group, 1818 Huangjinyan has been airing on the Zhejiang TV channel at 6:18 p.m. (hence its name) every night since 2004. It is a local news program in Zhejiang province known for its down-to-earth reporting angle and often humorous content: such as a man who hides in the closet so he doesn’t have to go to work, and is mistaken for a burglar by his wife; or a man who missed his flight to meet his girlfriend while getting eyebrow trimming and skin care. It even operates a 24-hour news hotline to help Zhejiang residents air grievances from their daily life.

However, the frequency of internet stars emerging from Huangjinyan‘s seemingly trivial reports has made some suspicious of the news outlet’s intentions. After appearing on the show, Wu went on to gain hundreds of thousands of online fans, and was seen on several advertisements and reality shows on TV. Zhang, after his report went viral, was identified as a livestreamer who sells products for menswear brand Peacebird on Taobao—his income correlates directly with the number of fans he has online.

Cynics have alleged that Huangjinyan exists only to promote individuals hoping to gain online followers, rather than report genuine news. A slew of articles have questioned exactly how Huangjinyan has become so popular, and questioned whether it deliberately hypes up stories featuring attractive protagonists on screen. 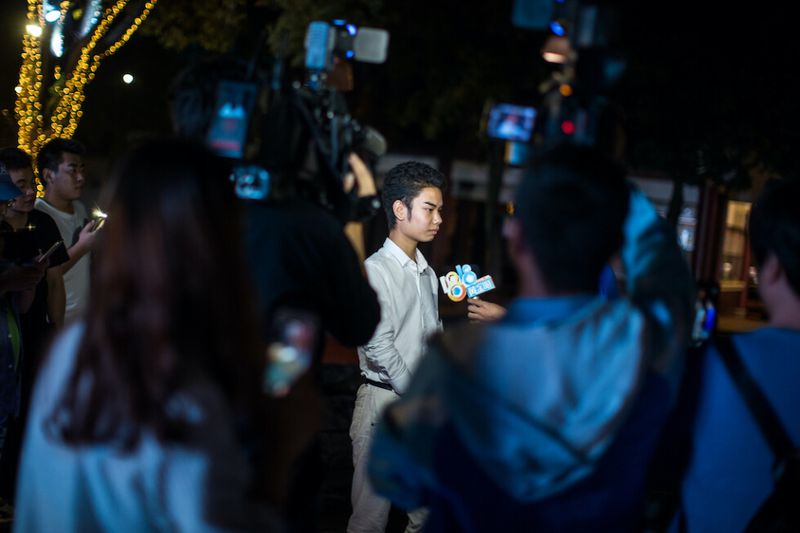 After swearing he would not seek a career as an internet celebrity, “Hairline Boy” appeared in several ads (VCG)

A report by Jiemian citing Tianyancha, a site providing background checks on businesses, found that 1818 Huangjinyan is linked to a recently founded multi-channel network firm, Huangjinyan MCN. The firm works with internet celebrities, and conducts livestreamer training and brand building as its main business. Huangjinyan MCN has signed more than 500 content producers, and the show’s official Weibo account acknowledged the link in a recent post promoting the firm’s internet celebrity training project.

Zhang maintains his profession and his appearance on the show are coincidental: In response to allegations, he clarified via Weibo that his story was real and he had not arranged to work with media organizations on the report. The production team at 1818 Huangjinyan told various media outlets that the accident was not staged or deliberately hyped.

Despite criticism, some still argue that 1818 Huangjinyan still plays an important role in safeguarding consumer rights by reporting on seemingly trivial stories of scams and consumer troubles. When a man in Jiaxing, Zhejiang, with seemingly unblemished skin, was tricked by an unscrupulous salesman into spending 8,000 RMB on acne products in 2018, a reporter from Huangjinyan confronted the store manager, and the man eventually got 4,000 RMB back.

Huangjinyan staff were themselves the focus of a 2019 report in GQ on the difficulty of doing consumer rights reporting. One reporter, Lu Baoxiang, a graduate from the prestigious Peking University, talked about receiving threats to himself and his family from those he reported on. One intern left the job after just a few days because she witnessed a landlord throwing a chair at the Huangjinyan team that came to report on a housing dispute.

Many netizens from Zhejiang defend the show, and express a sense of nostalgia for the program that has entertained them at dinnertime for over a decade. “My parents used to work in Zhejiang, and I often watched the show during the holidays,” writes one user on the online Q&A forum Zhihu. “Its reports range from quarrels to rights protection. The stories are real, showing real life and people in Zhejiang.”