Dancing With the Dead

Dancing With the Dead

A young girl in a traditional red wedding dress is sitting in front of the mirror, her body language revealing her joy at her approaching marriage. Her father is smiling beside her, but her mother is wiping away tears—for unknown to the girl, her husband-to-be is already dead, and she is going to marry a ghost.

This is the opening scene from “Ghost Marriage,” a dance performance that has prompted heated discussion on Weibo. In the performance, the modern medium of hip-hop street dance becomes the vehicle of a story that centers on the ancient practice of ghost marriage, or minghun (冥婚), where one or both participants in the marriage are dead.

Though illegal in China, ghost marriages are still practiced today in some rural areas. They might be conducted by families of young people who were engaged but died before they could marry, as some believe that the ghosts of unwed people would return and haunt their family members. In other regions, traditions forbid unmarried women from sharing the tombs of their birth family, so they must marry after death in order to use their burial plot of their “in-laws”. Sometimes, a living person is chosen to marry the deceased.

The performance, by the Frebel Street Dance Club of Guangxi Univeristy of Finance and Economics, is an example of how performers are increasingly introducing aspects of traditional Chinese culture through modern modes—reconnecting young Chinese with ancient customs, while also prompting debate on tradition.

At the beginning of “Ghost Marriage,” the young girl is unaware that she has been sold to a wealthy family to marry their deceased son. Later, when she finally understands, she tries to escape, but is caught, strangled to death, and buried after the wedding ceremony. In a WeChat essay, media platform Rage Comic praised the performance, writing that: “It’s common to use art to satirize backward, rubbish culture…but Frebel Street Dance Club’s performance is so direct, so undisguised, with a high degree of accomplishment and dramatic tension; it’s really shocking.”

These types of performances that combine modern dance and traditional Chinese culture have become increasingly popular in recent years. Some, like “Ghost Marriage,” criticize old customs and beliefs as backward, though others also seek a new way to express universal emotions, and even illuminate present-day social realities through reference to the past.

In the recently concluded third season of dance variety show Street Dance of China, Yang Wentao and Zhang Can’s performance “Xi (囍)” told the tragic story of two lovers in Wuhan during the Covid-19 lockdown in the city, with the dancers in traditional dress and performing a traditional wedding ceremony. The couple get married, and kiss, but then a wind-chime sounds and the wife leaves her husband alone. According to Yang, the performance was based on the true story of a nurse in Wuhan who died from Covid-19—who shared a last kiss with her husband before leaving for a shift at the hospital.

In Dance Smash, another dance variety show, Hao Ruoqi and Wang Xuerou performed Huo Xin (惑·心), based on the Qing dynasty (1616 — 1911) short story “Painted Skin” by Pu Songling (蒲松龄). Pu’s tale tells the story of a ghost wearing painted human skin to disguise itself as a beautiful woman and seduce mortals. In Hao and Wang’s adaptation, the performer in black is the ghost, while one in red represents the beautiful woman the ghost wants to be; after they struggle, the ghost eventually wins and takes over the beautiful woman’s body. 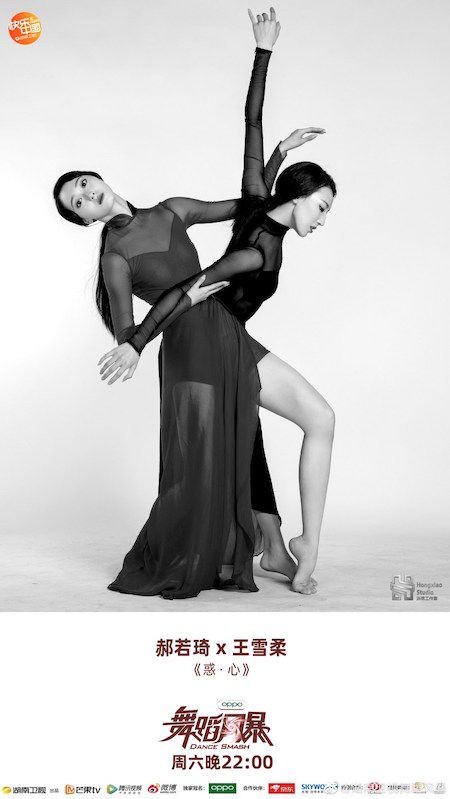 The mixing of modern dance styles with traditional Chinese culture is also encouraging viewers to explore even more aspects of Chinese culture from the past. On Zhihu, a question-and-answer platform, one user quoted from Ming dynasty (1368 — 1644) writer Gui Youguang to describe their feelings towards Yang and Zhang’s performance of “Xi”: “In the courtyard there is the loquat tree my wife planted the year she died. It stood there with graceful poise, its top spread out with exuberant foliage,” he wrote, adding “I shed tears.”

In addition to conveying unchanging emotions and cultural elements, this fusion of old and new in dance performances has also brought to light traditional practices that many younger viewers are increasingly critical of, such as ghost marriages. Less than a week after Frebel Street Dance Club’s performance went viral online, it came to light that the victim in a domestic abuse and potential murder case in Shandong province had been given a ghost marriage with a dead man after her decease. The woman’s family allegedly collected a brideprice worth thousands of yuan in the contract.

“As long as people’s rubbish thinkng hasn’t been totally eradicated,” Rage Comic commented, “then we will always need young people who dare to speak up.”