The famed coastline of Hainan has been shaped by millennia of salty surf, and so has the lifestyle of its inhabitants. For thousands of years, coastal dwellers boiled sea water to make salt, and farmed aquatic animals in the island’s peaceful harbors. Today, the fishing lifestyle persists, enthralling visitors with its display of Hainan’s rich maritime heritage.

On the coast of the Yangpu peninsula in Danzhou, visitors may at first be awed and confused by what they see—thousands of black volcanic rocks, all flattened at the top, dotting the seaside like the cells of a living creature.

The fishing village of Yantian (盐田村) has a long history of producing sea salt. Around 1,200 years ago, a group of salt workers from Fujian province migrated here and found leftover salt sprinkling the rocks after a hot day. They saw the business potential, and decided to carve the rocks flat with chiseled grooves to hold the brine, increasing the surface area for producing crystallized salt.

Over the years, the 50-hectare stone area grew into the Thousand-Year Ancient Salt Field (千年古盐田), the oldest and best-preserved salt field in China. About 30 villagers now work here, keeping the ancient tradition alive. Besides the magnificent view of the ancient salt fields and the opportunity to witness this living craft, visitors can pick up salt-roasted chicken and eggs from roadside vendors, seasoned—quite literally—with the flavor of the sea.

At 4 p.m., the Chen family sits down to dinner: fresh fish, vegetables, and the sweet spicy sauce that Hainanese can’t get enough of, served in ceramic pots and stainless-steel containers on the deck of their wooden raft. Fishing families are used to dining early, since they have to sail out to sea and cast their nets at night.

The Chens’ home is part of a curious complex, consisting of sturdy rafts built with a crisscross of bamboo and timber slabs. Under these rafts are net cages for farmed fish. On top, there are many red-roofed sheds where families dwell, supported by steel frames and shielded by iron sheets or waterproof boards. Between each raft complex are water channels where small boats shuttle the residents around, forming a floating community of more than a thousand families that stretches across Xingcun Port (新村港) in Lingshui. 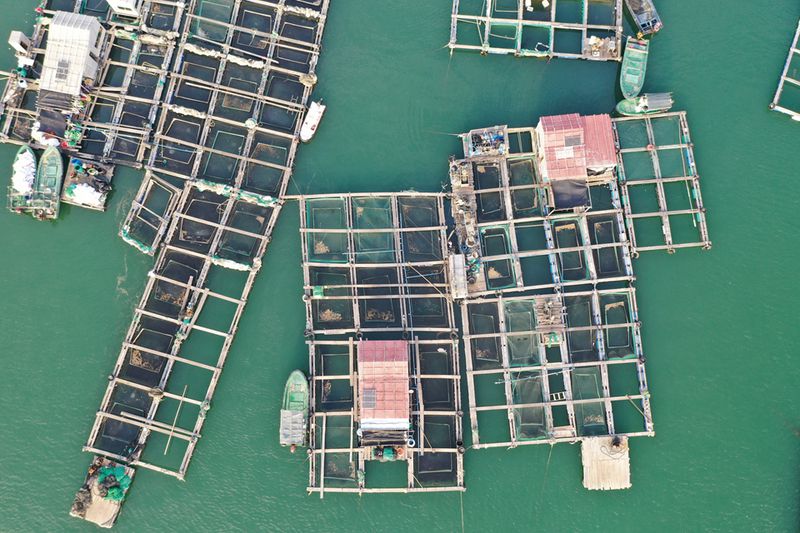 A large complex of rafts, where the boat people live and farm fish in net cages, floats in t he harbor at Xincun Port, Lingshui

Without a permanent home on land, these boat-dwellers, historically known as Danjiaren (疍家人) or Tankas, have lived in Xincun Port for 180 years. Most originally migrated here from the Yangtze River Delta and the adjacent Fujian province. Often persecuted by land-lubbers throughout history, the “boat people” found a safe haven here to fish and preserve their cultural practices along the shore, surrounded by scenic mountains.

Today, the floating village welcomes guests. Visitors can hop on a shuttle boat for a tour of the village and sample fresh seafood in restaurants on the rafts. The Nanwan Peninsula to the south of Xingcun Port is a state-protected preserve of rhesus macaques, and another popular tourist destination.

For the boat people, fishing is a seasonal business that is heavily dependent on the weather. Xincun fishers usually operate close to the shore, only 4 to 5 nautical miles from the coast. From September to December, however, without the threat of typhoons, they take longer voyages in the South China Sea. Though the younger generation is gradually relocating to firmer ground and taking up other vocations, some still hold on to fishing and fish farming, and a traditional life on the water.

Though Hainan is full of fishing villages and seafaring towns, the town of Tanmen (潭门镇), Qionghai, is where one can trace the history of fishing from ancient history all the way to the thriving practice today.

Located on the east coast of Hainan, generations of Tanmen fishers are known for their fearless adventures on the South China Sea. Though boat fishing in Hainan began in the Han dynasty (206 BCE – 220 CE), it wasn’t until the Tang (618 – 907) and Song (960 – 1279) dynasties, when advanced shipbuilding technology emerged, that fishing vessels dared to venture farther. Riding the northeastern monsoon in winter, they sailed south to catch fish and collect rare sea products like shellfish and pearls.

To navigate the vast ocean, ancient sailors used compasses and a technique called qianxingshu (牵星术, star-drawing) based on astronomy. Using a set of wooden planks of various sizes, they measured the height of the stars in the night sky above the horizon to calculate the ship’s latitude.

These voyages were filled with danger, and seafarers faced the constant risk of being lost forever due to changing weather and lurking reefs. It is for this reason that Tanmen locals refer to the South China Sea as shitang (石塘, stone pond). Facing great perils, fishing families formed camaraderie, and a thousand year-old pact to rescue any fellow sailors in danger at sea. Tanmen fishers also developed a unique custom of praying to the “108 Brothers” (108兄弟公). It is said that a band of 108 fishermen once made a vow to sail together to defend themselves from pirates, setting an example of mutual aid and peacekeeping at sea. Unfortunately, one vicious storm sank the brothers’ ships, and all hands were lost, but their spirits are believed to protect sailors even today.

Before setting sail, sailors hold a zuofu (做福, blessings) ritual in the Brothers’ Temple in Tanmen. They offer sacrifices such as incense, meat, and rice to the Brothers, and perform a dance with a carp-shaped lantern. During their voyage, sailors build shrines for the Brothers out of rocks on islands and any uninhabited islets they land on. The return of fishing boats after months of working at sea is also marked in the Brothers’ Temple by a celebration called xixian (洗咸, washing off the salt).

Blessings from deities aside, the mariners’ wisdom and courage drove bold explorations. Until the mid-20th century, Tanmen fishers relied on ancient navigation methods to make their way across the South China Sea. Maintained and expanded by generations of sailors, the Manual of Sea Routes (《更路簿》) recorded hundreds of sailing routes, the names and locations of islands and reefs, solutions to emergencies at sea, information on currents and climates, and other seafaring knowledge. While many different versions of the manual exist—some only passed down orally—the oldest remaining print version dates back to the Yuan dynasty (1206 – 1368). Though many of its functions have been replaced by modern navigation technology, the remaining copies of the manual reflect the rich history of ancient fishermen at sea.

Today, the fishing port of Tanmen serves as a launching pad for deep-water fishing around the South China Sea. A quarter of the town’s population—over 32,000 people—is involved in the fishing business. Their catch includes Chinese mackerel, grouper, tuna, sardines, sea cucumber, shellfish, lobster, and crab. Visitors can easily find seafood restaurants in the eastern section of Fugang Street (富港街) near the Tanmen Central Fishing Port (潭门中心渔港), which offer fresh catches of the day at reasonable prices. Be aware that from May to August, there is a fishing ban in the South China Sea to allow fish to breed, so those interested in sampling fresh seafood may want to visit at other times.

In 2017, the Tanmen government banned the sale of products made of Tridacninae, giant clams traditionally used for jewelry, and any coral-related products.