Xiong Jingnan (熊竞楠) rarely rests. Even after finding herself stranded in Singapore during the Covid-19 outbreak, the Shandong native who once aspired to be President, and says she “never understood the concept of defeat,” continued to train until she defended her strawweight champion title at the ONE Championship in Mixed Martial Arts (MMA) for the fourth consecutive year in October.

Originally viewed by many Chinese as unnecessarily violent in contrast to the more spiritual wushu, MMA has seen a big boost in popular support in China as its athletes continue to excel in overseas competitions. As China’s first MMA World Champion, Xiong, affectionately known as “The Panda” by her fans, sits down with TWOC to discuss the rise of MMA in China and her journey into her nontraditional career.

I grew up in a village outside of Jining in Shandong province. The area is known for being the land of The Outlaws of the Marsh, and those legends infused my childhood. I was like a boy; I was really naughty and always running around the countryside. Every weekend, I would watch boxing on television with my dad. I noticed that there were very few Chinese faces in the sport, which made me sad.

I left home and my parents to begin training in weightlifting when I was 11 or 12 years old. At first, my mother was really worried; she still believes that I am short because I stunted my growth with the weights. I am 165 centimeters tall, whereas all of my family members are over 180 centimeters and are giants next to me. When I first saw MMA, I thought back to the boxing I used to watch with my dad as a kid. I was intrigued by how MMA fighting required you to use every part of your body. MMA is not just one thing—it is boxing, muay thai, Brazilian jujitsu, and wrestling all thrown into one. 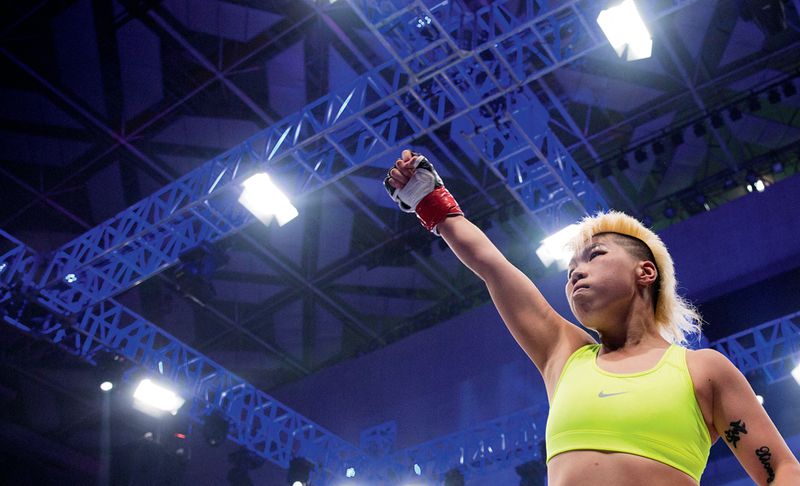 I  normally get informed about an upcoming match about two to three months beforehand. Then, I start preparing to go to training camp abroad in Bali. The training camp is very intense; I only have Sundays off. I wake up around 6 a.m., but normally, I am so tired from training the day before that I just stand in the mirror and try to motivate myself by smiling and saying “Jiayou (加油)!”  I have three or four training sessions every day, and each one lasts between one to two hours.

After my sessions in the evening, I always try to practice English a little. Almost all of my coaches are English-speaking and it is really important to be able to communicate with them. Before going to bed, I write about my day in my diary and read a little from a motivational book. I often end up adopting a lot of stray cats and dogs in Bali. I go to and from my training by motorcycle and I keep animal food inside my vehicle. Whenever I see animals, I just stop and feed them. It’s my favorite hobby.

When you aren’t training for a fight, what does your life look like?

I have lived in Beijing for about the last six years and my life is actually quite boring. I go on one jog in the morning and one in the evening. If it’s polluted, I just end up running on a treadmill at home. Sometimes, I might go to a gym and do a little training on my own. I like to go hiking and meet up with friends.

In Chinese history, men always took priority and their social status was always much higher. I think that females are doing so great in MMA because Chinese women have waited so long to find the platform for showing our power. There are lots of great male MMA athletes in China, but it might be that women want it more, because of our history. To me, being a modern Chinese woman means being independent—both financially and mentally. You shouldn’t give a damn about what other people say about you and you have to hold true to the values inside of your heart. 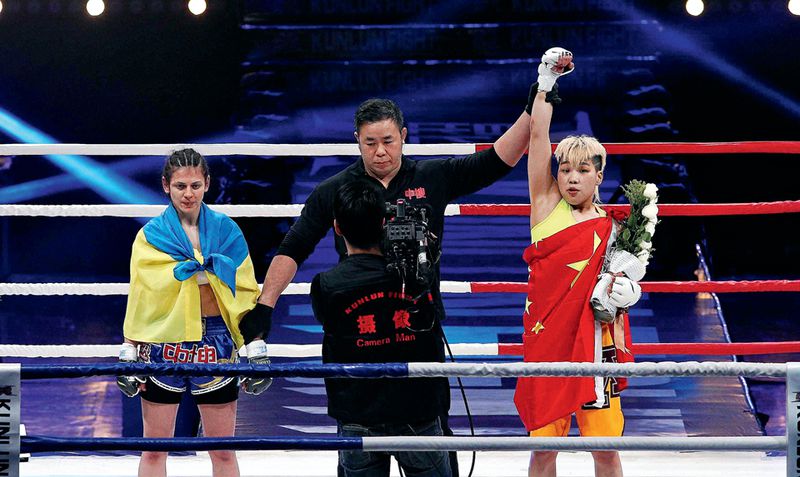 How do you balance work with your personal life?

I don’t think that I manage my family and work in a balanced way. You know, in traditional Chinese values, children should not travel too far from home while their parents are alive. Sometimes, I am even out of the country during Chinese New Year. I rarely go home, and I certainly don’t go home right after a match, because I don’t want my parents to see my injuries. I normally wait a month or two to make sure the bruising and the swelling have gone down. On the other hand, I realize that by pursuing this career, I am making my family proud and honoring the values which they instilled in me.

Do you have a lot of family support?

I feel very lucky. I never got any pressure from my family to settle down and be a wife or mother. When I was a young girl, my father taught me to be brave and confident. I never had any idea of what a typical woman should be.

My father always watches my matches live on television at home; but it upsets my mother a lot. As soon as the announcers say my name, she goes into the bedroom and covers her head with a quilt. I know that she is really worried by this career that I chose for myself. She never talks to me about it, because she wants me to pursue my dreams, but I can feel it.

What is your secret to success?

First, I train really hard. I think that my personality also has something to do with it. I have never understood the concept of defeat. I believe that nothing can ever defeat you unless you allow yourself to be defeated. But I think the secret to success is a sense of mission. Even when I was a child, I felt different from the other kids—that I needed to do something important in my life. At the time, I wanted to become the President when I grew up so that I could help the people whom I saw suffering. I didn’t become the President, but I am still able to help people. I help out at animal shelters when I am in Beijing. Every time I go back home to Shandong, I give money to elderly people who live below the poverty line and sponsor students by giving them clothes and books.

Looking ahead, what comes next?

I know what I do is dangerous. If I agree to fight without conditions, there is a possibility that I could get choked or break bones. Now that I am in my 30s, I know that this is not the best age for MMA athletes—and the female physique is not as durable as the male’s. Sometimes, I am afraid that this means that I will not be able to continue doing what I love. I am not sure what the future looks like, but I believe in doing the best that you can with what you have today. I try to live in the moment and help as many people as I can.

Mix It Up is a story from our issue, “Rural Rising.” To read the entire issue, become a subscriber and receive the full magazine. Alternatively, you can purchase the digital version from the App Store. MMA in the Middle Kingdom

Paying the bills with broken bones They Run These Streets

Parkour pounces on the walls and ledges of Beijing