No headdresses, no vacant stares: How young artists challenge the parameters of “ethnic” photography

Lobster on the left, tsampa on the right; two versions of London chef Tenzin Nyendak sit side by side in a diptych of portraits. In the one with brighter colors, he rocks a double-breasted chef’s jacket and a toothy grin, holding up the high-end crustacean on a plate; the one with more muted colors shows him in a traditional Tibetan gown with a more subdued smile, holding the highland barley that is a staple food for Tibetans.

This pair of photos is part of “Performing Tibetan Identity,” a project by Lhasa-born photographer Nyema Droma that tries to challenge how her ethnic group has been represented in a century of photography in China and abroad. The series welcomed young Tibetans living in Europe and China to pose for portraits with clothing and belongings that they felt were essential to their identity—from scratched skateboards to tattoo sleeves to a rainbow flag—alongside a more “serious” portrait in a traditional outfit of their choice. Video interviews with the subjects, in which they each talk about why they chose the elements to represent them and how they relate to their Tibetan identity, complete the project.

Nyema Droma exhibited the project at Oxford University’s Pitt Rivers Museum in 2018 and says it resulted from a “process of self exploration…and understanding my own identity.” Her first major project on this theme, a 2014 series called “Modernizing the World’s Roof,” featured an elderly Tibetan monk drinking Coca-Cola, her uncle and a friend enjoying Budweiser beer, and a woman in a traditional outfit clutching a designer handbag under her arm.

Having moved away from Lhasa to attend elementary school in Chengdu, Sichuan province, Nyema Droma returned home in 2015 after graduating from London College of Fashion, where she was trained as a fashion photographer. From her home in Tibet, she has continued to observe the effect of globalization on a society often perceived as mysterious in the West.

She talks about this in a 2020 documentary by China Central Television: “Stereotypes might have it that a nun only chants scriptures all day sitting in a temple, but there are many new things in her life, like hip hop...or she might wear a Buddhist robe, but with a pair of Air Jordans.” Indeed, one of the subjects in “Performing Tibetan Identity” is Sen Chung, a young Buddhist nun from Qinghai province who sat for her portrait with a pair of headphones and a lively wink. Yet these changes on the Plateau, as well as in the lives of many Chinese ethnic groups, are rarely apparent in the visual language commonly associated with them. In June 2021, Shanghai’s West Bund Art Center welcomed an exhibition called “Us: China’s 56 Ethnic Groups” by photographer Chen Haiwen, which purportedly took 12 years of intensive research.

The resulting images themselves, while impressive in scale and technical quality, are hardly innovative: highlighting intricate headwear and jewelry, deeply-lined skin, and activities exotic to the urban gallery-goer such as herding elephants, jumping over a fire pit, or fishing on stilts.

Another exhibition in 2020, the Chinese Visual Ethnographic Photo Biennale, made an effort to suggest in its call for entries that photographers forgo the appetite for “novelty and shallow travel photos,” and instead pursue long-term projects or document their own ethnicity. While the works exhibited showed a greater diversity in approach, many project descriptions still highlighted the “pure eyes,” “simple lives,” and “positive spirit despite poverty” in their subjects. Such trends are not new. In the mid-19th century, Western explorers such as British army officer Alexander Brodie Melville and Scottish physician John Forbes Watson traveled to the Tibetan Plateau and brought home portraits labeled “Tibetan Lady,” “Buddhist Lama,” and “Thibetan Native,” which accentuated “the physical features of the ‘type’” and “emphasize[d] exoticism and difference from their non-Tibetan consumers,” as Claire Harris, a professor of visual anthropology at Oxford and co-curator with Nyema Droma on her exhibition, wrote in a curatorial commentary.

In the 1930s, Zhuang Xueben, an amateur photographer from Shanghai who is now widely considered China’s first visual ethnographer, made many trips to Xikang, a province of the former Republic of China on the border of what is today western Sichuan province and the Tibet Autonomous Region. The area was inhabited mainly by Khampa Tibetans, but also the Qiang, Yi, and Han ethnic groups. The images Zhuang brought back, documenting the physique, costume, lifestyle, and architecture of the peoples he encountered, were widely distributed by Shanghai-based pictorial The Young Companion. Kaleidoscopes of head shots were arranged side-by-side into articles entitled “Coiffures of the Tibetan Women” and “The Ching Hai Women and Their Head Wear,” and portraits of different ethnic groups were sometimes published together. They constructed a sense of “exotic spectacle” or “categorized knowledge from the frontier,” which “produces the possibility of a future where ethnic groups intermingle,” writes Menglan Chen, a PhD researcher at Harvard University, in a 2020 article on Zhuang’s photography.

Chen’s interest in Zhuang sprang from her own previous photography project documenting a Qiang village in northern Sichuan. “I started questioning why every [visual ethnographer], myself and Zhuang included, gravitates toward a similar style,” she tells TWOC, referring to the typical shoulder-up portraits often seen in Zhuang’s work. 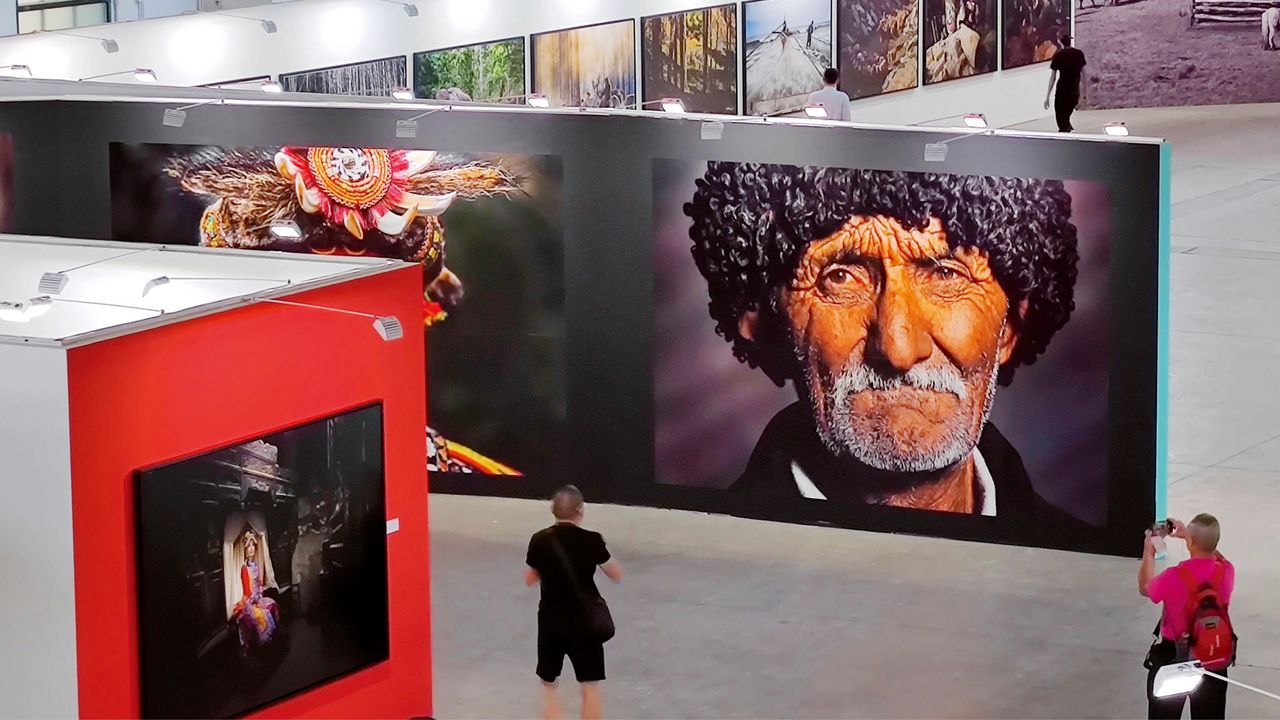 Some scholars argue that this style originates from the disciplines of biological anthropology or forensic anthropology from the end of the 19th century. “By standardizing the format, it subjects the photographed bodies to both physical and moral measurements,” Chen explains, finding this type of “gaze” objectifying the subjects and their bodies. “We need different ways of seeing, not just different things to look at.”

Parallel to Nyema Droma’s works, some other efforts have risen in China to diversify representation of ethnic groups in photography. In 2015, Na Risong, a curator and director at Beijing’s Inter Art Gallery who is Mongolian by ethnicity, launched Country Road, a biannual award recognizing photographers from minority ethnic groups in China. The goal is to bring forward perspectives that showcase “contemporary ethnic groups, not primitive societies,” he says in an interview with news website Sohu, pointing out that as cultures have evolved alongside modernization, so have ethnic identities. Among the photographers recognized by the award is 2019’s winner Luo Jinqian, of the Zhuang ethnic group in southwestern China, whose work portrays the mechanization of farming in her home village in the Guangxi region. Placing fake wire-and-fabric animals created by her father into scenes of a family slaughtering a pig, cows sauntering in front of factory chimneys, a bull’s head being offered at a religious ritual, Luo created uncanny scenes inviting viewers to ponder what the future holds for traditional farming life and the environment.

Unlike some other photographers, Nyema Droma included, whose experiments often combine and contrast modern and traditional elements in their portraits, Luo rarely telegraphs “ethnic” cues in the clothing, architecture, or actions of her photos: The scenes look like they could come from any village in China. Phuntso Droma, one of the winners of the 2022 Nerhi Photography award, went around temples in Tibet to capture how offerings on manza plates have kept up with time, in her series “Contemporary Offerings” (Nyema Droma)

What an artist like Luo captures in their own community “is different from what an outsider can,” Gu Tao, a jury member of the Country Road award, tells TWOC. Gu is a well-known photographer-turned-documentary filmmaker with Mongolian, Manchu, and Ewenki heritage, whose own works often tell stories of northern Chinese ethnic groups. “I am most touched by the emotions and feelings, not technicality or production value…things that are spontaneous and flow out naturally.”

On the other hand, works produced by “one of the tribes” are not automatically immune to tokenization. Last year’s Country Road winner, “Disappearing Horizons,” is a project by amateur photographer Zhong Mingxi of the Lahu ethnic group, whose mobile phone images of life in her village in Yunnan province visually echo the works of Zhuang Xueben: people in ethnic outfits staring at the camera in a static portrait, or carrying objects and engaged in stereotypical activities. “Even though the photographer is looking back at their own community, they are still catering to an outside viewer, a larger community,” says Chen on the idea of self-ethnography. “Therefore [the photos] carry the perspective of an outside viewer, too.” Nyema Droma emphasizes that she wants to challenge Tibetans’ own stereotypes about themselves. “Tibetans might say, ‘We Tibetans are all Buddhists,’” she says as an example, “but it’s not true. Among us Tibetans, there are also Catholics and Muslims.” In “Performing Tibetan Identities,” Nyema Droma included a Muslim, Shahid Hussein—appearing in a black kufi and a silver chain bracelet, while holding an American football. “If [photography] can get young people of our own ethnic group to think, then I think it’s necessary,” Nyema Droma says.

The young people across the Tibetan Plateau are one of the audiences Nyema Droma hopes to reach the most with her work. In addition to her photography, she has hosted community events such as culture fairs and Tibetan dress parties catering to young Tibetans, and designed clothing combining traditional features and motifs with modern functions and fabrics through her brand Nerhi. A monk drinks a Coca Cola in “Modernizing the World Roof,” 2014 (Nyema Droma) An elderly Tibetan woman in traditional outfit tries on a pair of glamorous sunglasses in “Modernizing the World Roof,” 2014 (Nyema Droma)

She has also hosted an annual Nerhi Photography Competition for five years and counting, hoping to build an ecosystem that supports diversity in expressing and perceiving ethnicity. Young photographers all across the Tibetan Plateau—including a monk, a mountaineer, and a university student inspired by Nan Goldin—have submitted their work and seen them exhibited in galleries in Lhasa, Chengdu, and New York City. “Everyone has their own ways of observing the world,” Nyema Droma explains, “so if I can build a platform to have more people interpret things they see in Tibet with their own perspectives, it would mean a lot more than just me [expressing my own].”

Snap Judgment: Photographing Ethnic Groups, Sans Stereotype is a story from our issue, “The Data Age.” To read the entire issue, become a subscriber and receive the full magazine. Alternatively, you can purchase the digital version from the App Store. Kaleidoscope: At the Zhapo Beach Kaleidoscope: What’s Inside the Tulou

Designed to keep people out, these World Heritage buildings now welcome tourists with tobacco and tea