On New Year’s Eve of 2001, Wang Englin was making dumplings and playing cards with his neighbors when he realized his house was getting flooded by waste-water from the Qihua Group factory nearby.

Mr. Wang knew he had to do something about this for his and his neighbors’ well-being in the village of Yushuntun, close to Qiqihar, Heilongjiang province in northeast China.

With only three years of education, Mr. Wang didn’t think that he had to provide legal evidence to support his accusation against the company, and although he didn’t have sufficient knowledge on environmental law, he was determined to fight.  He taught himself law during the following 16 years, so that he could build a strong lawsuit, even though he didn’t have enough money to pay for his education either. He said he would spend every day reading at a local bookstore and was allowed to copy information by hand in exchange for free bags of corn. 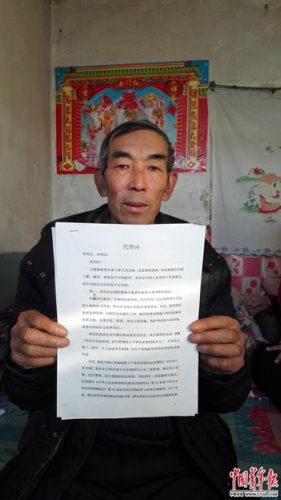 Just last week, Mr. Wang’s lawsuit was processed and a judge decided to rule in his favor. The evidence he gathered during more than a decade helped the 60-year old Chinese farmer to show that the company waste near his house, which is estimated between 15,000 and 20,000 tons, had made his and his neighbors crops die slowly.

It certainly is a major accomplishment for someone who doesn’t have any educational background in law. Especially since law texts are generally published without pinyin, making it double hard for Mr. Wang, as he would have encountered many new characters for legal terms he had no familiarity with, and no way of knowing how to pronounce them.

Qinhua Group has already appealed the court’s decision of paying a 120,000 USD indemnification to Mr. Wang and while he has won for now, the battle continues. He, however, has proven that even though everything is against you, perseverance always wins. Beijing’s smog squad remains mysterious, but some details are coming to light Violence on the home front

Recognizing and putting an end to domestic violence in China.