A soothing dish to take the sting off the summer heat

The lingering fragrance of tea and the divine texture of shrimp: 龙井虾仁, a signature dish of  Hangzhou, brings imperial pleasure to your dining experience.

As connoisseurs of tea, the Chinese have elaborate systems for brewing and growing it, yet, for Chinese tea enthusiasts, tea culture involves so much more. Besides the famous aromatic beverage, tea can also be turned into medicine, oil, and can be used in cooking. Longjing tea is great for dialing down the summer heat and goes well both with a meal and in a meal.

The story of Longjing shrimp, like many other classic dishes, relates to the Qianlong Emperor (乾隆皇帝), a Qing Dynasty (1616-1911) emperor known for his obsession with the region of Jiangnan (South of the River, 江南) and food. On an excursion to the South, Qianlong passed Hangzhou, the hometown of Longjing tea while touring the picturesque West Lake.

Disguised as a commoner, the Emperor hid from the rain in a woman’s house and was offered tea made from freshly-picked tea leaves boiled in spring water on a charcoal fire. Impressed by the taste but not wanting to reveal his true identity, the emperor pocketed some and continued his trip. At sunset, he reached an inn and ordered several dishes, and among them was fried shrimp. When the emperor passed the tea leaves to the waiter to make some tea, the waiter caught a glimpse of  the imperial gown underneath and rushed to inform the chef.

Horrified and under immense pressure, the chef  accidentally added tea leaves into the dish, mistaking them for green onions. The luminescent pink color of  the shrimp with the green leaves scattered amongst them, coupled with the fragrance of Longjing, won the emperor over. Thus the classic Hangzhou dish was born.

Some attach a poetic rather than imperial signifcance to the origin of  this dish. Many credit the inspiration of Longjing shrimp to a poem written by Su Shi (苏轼), the famous Song Dynasty (960-1279) poet and gastronome. The verses have a ftting title, “Remembering South of  the River” (《忆江南》), which states: “Do not reminisce over the old country with old acquaintances; Instead, build a new fire to brew new tea. To enjoy poetry and wine, take advantage of  your prime.” (休对故人思故国，且将新火试新茶。诗酒趁年华。) The “new tea” in the poem refers to tea made from tea leaves picked within the year (usually early spring), also used in Longjing shrimp.

“New fire” is related to an ancient Chinese tradition called the Cold Food Festival (寒食节), which falls right before the Tomb Sweeping Festival (清明节). Since fire was banned during the Cold Food Festival, fire started for cooking after the festival was called “New Fire”. The poem was believed to inspire a Hangzhou chef to combine newly picked tea leaves with shrimp from the river.

Consisting mainly of fresh shrimp, the dish is perfect for detoxifying from the ill effects of summer. Rich in amino acids, Longjing tea lowers the body’s temperature and kills off bacteria, and the river shrimp, which are highly nutritious, can strengthen the kidneys, and improve circulation. River shrimp, or 河虾, are a type of freshwater prawn, and in the Compendium of  Materia Medica (《本草纲目》), river shrimps, when peeled and served with ginger and vinegar on the side, are praised as a “delicacy among food”.

This aromatic delicacy was among the dishes Premier Zhou Enlai prepared for President Nixon in Hangzhou during his visit to China in 1972. Local Hangzhou chefs at Xuxian Lou (许仙楼) are known to take around three hours to complete the dish, but for cooks at home, the process is much easier and less time-consuming. Whether it’s the product of the Emperor Qianlong’s thieving or poetic nostalgia, Longjing shrimp has become a classic Hangzhou dish that you simply must try.

How to Make it Yourself: 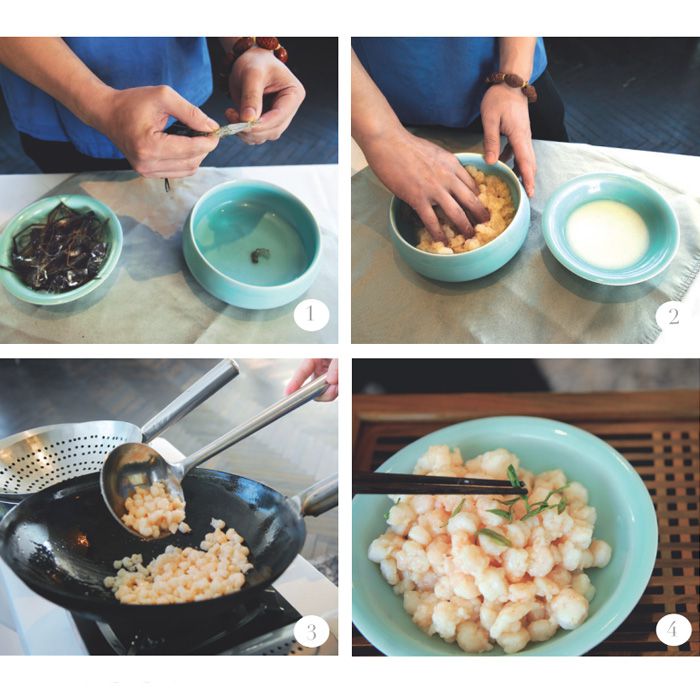 Chill the shrimp for 30 minutes. To peel the shrimp, hold the shrimp’s head and its tail with its stomach facing away. Then, squeeze your index finger and thumb to force the shrimp out of its shell naturally. Make a pot of tea (25g of tea leaves in 50g of hot water) and let it sit for 15 minutes. Pour the tea into a bowl to soak the peeled shrimps. Add 15g of salt, and let it sit for about 20 minutes.

Wash the soaked shrimp in running water for 20 minutes and use a towel to dry them. In a bowl, add 2g of salt and 5g of wet cornstarch. Stir until the shrimp are evenly coated.

Heat the wok on a high heat and pour in 500ml of cooking oil. Heat until the oil reaches 120 degrees Celsius. Pour the shrimp into the boiling oil, stir for 10 seconds, and then fish them out.

In a clean wok on medium heat, add three to four spoonfuls of tea. Add salt, cornstarch, and then put the shrimp in the wok. Flip four to five times and then plate the shrimp. Decorate the pile with brewed tea. Then, simply dip your shrimp in vinegar and enjoy! For centuries, the rugged landscapes of western Sichuan played host to caravans of the legendary Tea Horse Road