It’s not Saturday Night Live, it’s a beast all of its own. Censors killed it last year, but it’s back

China has its own Comedy Central Roast now! Sort of.

Known for its Chinese name 吐槽大会, the short-lived Chinese version of Roast first aired in July, 2016. Similar to its American counterpart, each episode roasts one particular celebrity. Seven or eight guest roasters come on stage one by one, bringing up controversial barbs about the victim, who later will be given an opportunity to fight back. The format, and potential for controversy, is what has drawn widespread attention.

The first episode was viewed 10 million times in the 20 hours after it was released. Its fans called it “the dirtiest show in history”, which is perhaps an explanation why this show was so popular and indicates that it’s not an average talk show seen in China.

The roastee of the first episode was Zhou Jie, an actor known for his role in Princess Pearl, a popular romance TV series 20 years ago. There are many negative reports about him these years—he allegedly beat a security guard, kissed a co-star actress using his tongue while acting (despite it being unnecessary), and is always arrogant and bossy at work. He was even made into Wechat stickers, because of his exaggerated body gestures and facial expressions. Even his nostrils were noticed, because they were just too big when Zhou tried to express a strong emotion. 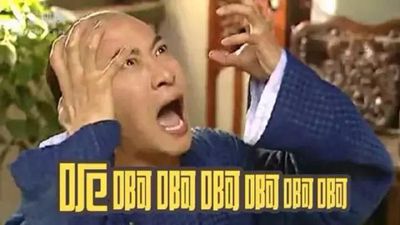 A sticker of Zhou Jie [baijia.baidu.com]

In the show, these were all brought up. Zhou himself made fun of it as well. He held a brick and said to one roaster, “I won’t beat you, because you are not as important as a security guard.” And to another, “I despise you with my nostrils.” As for those popular stickers of him, Zhou said: “Feel free to use them, but don’t @ me!” Apparently, the audience had never seen this side of Zhou, and the show triggered wide discussion on social media. Zhou’s humor and eloquence helped him win many viewers’ hearts. Many even said that they had become fans. “Despise you with my nostrils!”

But only three days later, the show was removed from the internet. Though no exact reason was given; people guess it’s because the show “crossed the line”, which was of course set by SARFT.

More than half a year later, with people still mourning its premature demise, Roast came back, with its content finely adjusted. The reproduced show cut any “dirty” jokes but kept a degree of its wild style and won great popularity.

Guests included Tang Guoqiang, a successful middle-aged actor who has played Chairman Mao in many films and TV shows but impressed the audience even more successfully with his image in a TV commercial for an excavator-driving training school for many years; Cao Yunjin, a cross-talk actor known for his break-up with his mentor Guo Degang, a famous cross-talk master; Phoenix Legend, a pop group who has produced many pop songs for square-dancing dama; and Li Xiaolu, an actress who was suspected of having plastic surgery. Their performances, thus far, have been widely praised.

Li Dan, one planner of the show, said in an interview with Beijing Morning Post that they selected these stars carefully. “Our criterion is that our guest must be household stars,” says Li, “But those hot ‘little fresh meat’ [internet slang referring to popular young male stars] are not invited. Roasting them face-to-face, can they bear that? Even if they can survive it, what about their fans?”

But the show also realizes that, by “roasting” it doesn’t simply mean personal attacks. The jokes aren’t supposed to only be dirty or mean. High-quality humor and the spirit of self-mockery are the aims—as the slogan of the show states: Roasting is a technique, to face it requires courage (吐槽是门手艺，笑对需要勇气).

However, not everyone speaks highly of this show. Many said that the show is just “fake”, and the roastees have already agreed to all the jokes, so they just need to follow a script and speak on cue. Some netizens even said that this show is just a platform for “notorious” stars to “clean” themselves up. The show can be found on v.qq.com.