Another week, another controversy about bicycles being found in places where they shouldn’t be. No, not bikeshares, though they certainly are a nuisance. This week’s misbehaving bikes adorn the façade of a building in Beijing’s Weigongcun neighborhood. According to China Youth Daily (in Chinese), the installation consists of 16 “vintage” bikes welded and bolted to the front of the building, overlooking the sidewalk. They were installed last year as part of the building’s transition from a drab three-star hotel to chic industrial-style lofts called the MORE Residence.

But last Friday’s Category 7 winds gave residents an opportunity to air some a long-held anxiety: What happens if any of the bikes—the lowest of which is 10 meters off the ground—fall off and hit a parked car or person (in that order)?

Urban management officers (chengguan) have already raised the issue with MORE’s management, and the Haidian district authorities a notice last Friday for them to “make improvements.” According to the Beijing Municipal Regulations on Urban Image, Environment, and Sanitation, it’s prohibited to affix decorative objects to building façades that abut the street.

Locals interviewed by China Youth Daily have called the artwork “bizarre,” noting “art shouldn’t endanger pedestrians, especially when it’s windy.” The installation is also being raked over the coals by netizens for being ugly or, worse, unoriginal. “They look like flies, I want to swat them” is one comment trending on Weibo. MORE’s spokesperson Xu told China Youth Daily that the wall would normally carry ads, but that bikes was a more meaningful use of the space. It’s not art, he argued, but a decoration that attracts notice—so arguably an ad.

China Youth Daily refers to the bikes as “Old Two-Eights” (老二八), a type of clunker ubiquitous in China from the 1960s until well into the 80s, with 28-inch wheels, a distinctive triangular black frame and a utilitarian “seat” above the rear wheel.

But TWOC can’t help comparing the artwork to motifs favored by Ai Weiwei, such as the 2003 installation Forever, (“Forever,” or 永久, was also the name of the most common brand of “Two-Eight” bicycles). 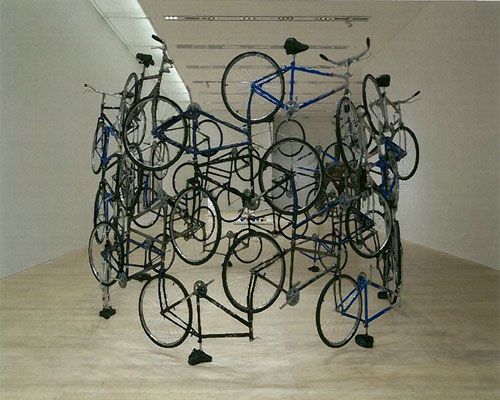 MORE’s manager, Xu, tells China Youth Daily that the bikes’ “traditional retro elements are supposed to attract the attention of youth.” Ai’s installation has already been copied, such as at an exhibition on Shanghai’s The Bund last October. Indeed, Ai’s work may not have been so original itself: “Two-Eight” fandom has been going strong for at least a decade, manifesting itself around hip cafes and bars around the country—even reviews of Ai’s work commented on the “nostalgia” surrounding the piece.

Then there’s the issue that “wall art,” far from being art, is on its way to becoming commercialized kitsch. In places like Dagao Art Village in Beijing’s Tongzhou district, wall art is deliberately used to create atmosphere in what’s essentially a corporate development of lofts and studio spaces, constructed solely to be rented out to artists, creative start-ups, and associated small businesses like English schools and cafes.

Weigongcun bikes are not the only installations to run afoul of safety regulation or taste. Here are a few moern examples of controversial building art in China:

In 2008, the Dongfang Daily reported (link in Chinese) that an old woman in Shanghai shopping for vegetables ended up in hospital with after spying this instillation, which triggered her existing heart condition: “I went out this morning and looked up at the high-rise across from me—there was a naked man hanging from the building’s edge! It was terrifying!” she told the paper. The art in question was “Injured Angel” (notice the wings) and was installed several buildings in and near an art district in Shanghai. The incident inspired Dongfang Daily to publish a stern 1,000-word commentary on the limits to artistic expression.

“The artist behind this piece was too focused on his individual artistic tastes…which can only be applicable to a niche audience,” the paper said. “If the artist is then to display their art publicly, then they must consider the limits to what the public can accept.” Even “Western nations” have banned individual questionable artworks from public display, the paper went on to say and that regulations, as long as they are reasonable, are a good thing.

Naked Buddha jumps onto the wall

Only two days after putting it up in January 2014, a restaurant in Jinan, Shandong, had remove this installation on orders from local authorities. While the local business owners’ association didn’t seem to invest any special meaning in the sculptures, members of the public called it a visual representation of the dish “Buddha Jumps Over the Wall,” a gourmet soup said to be so savory it once caused a monk to jump over his monastery’s wall when he smelled it cooking next door (it’s also a controversial dish for its use of shark fin).

But while the legend about a monk breaking his vows when confronted with meaty grub is widespread, the public drew the line at seeing it actually represented—or maybe, just represented so terrifyingly. The SCMP reports that buddhist practictioners took particular offence by the disrespect shown to their traditions. 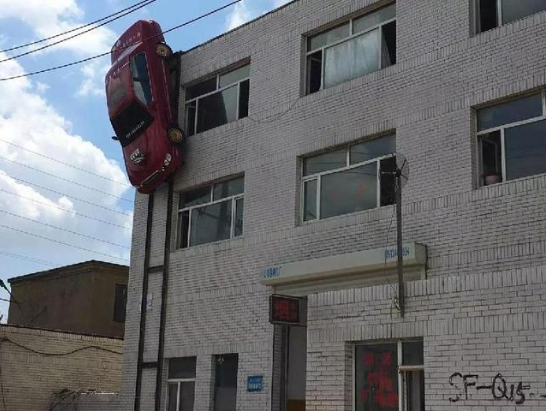 A repair shop in Changchun, Jilin, decided to weld a car to the wall of their building in January. Local residents complained about the possibility of the car falling off, but the owner assured the media the vehicle was secured, doubly insured, and stripped so that it only weighed 500 kg (link in Chinese).