Having run for eight successful years in London and won a Tony in New York, it may seem surprising that Yasmina Reza’s play Art only arrives in Beijing for the first time this week.

Then again, Beijing doesn’t host a great deal of independent English-language theatre. Lead actor Carlos Ottery blames financing and censorship: “It puts a lot of people with talent off for good.” 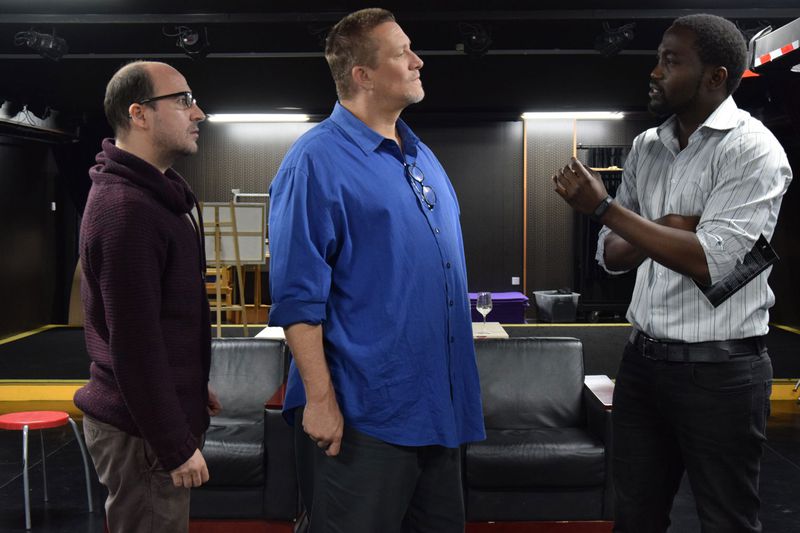 Art attack: Ottery (left) tees off with Allen (center) and Kamanguza (right) as Yves, Marc and Serge in the Beijing production of ‘Art’

The plot of Reza’s comic three-hander is simple, which perhaps explains its enduring appeal after 20 years (it recently finished a successful run at the Old Vic in London, with Rufus Sewell). As the Guardian puts it: “Serge buys an apparently pure white canvas by a fashionable artist for 200,000 francs. His old chum, Marc, think it’s a piece of shit. Yves [sic], their common friend, tries to reconcile their views and only succeeds in antagonising both of them.”

Although this is the premier for Hampton’s original, there have been Chinese-language Arts going back to 2001, when the Shanghai Dramatic Arts Centre showcased seasoned actors Lin Dongpu (Marc), Hao Ping (Serge) and Xu Zheng (Yvan) in a Mandarin translation; the response was sufficiently enthusiastic to warrant an encore in  2003, and a Beijing version in 2004. The play has since been added to the Centre’s repertoire, with the most recent show in Shanghai last year. All of which leaves little doubt that there is an appetite for Art’s themes in China.

Directed by local thesp Gregory Joseph Allen, who also plays the caustic Marc, Art’s 90 minutes offers plenty of thought to chew on afterward over Tsingtao and chuanr. “If we, as a creative team, live up to the potential of the source material, it should make for a wonderful evening of theater for both artist and audience,” says Allen.

The casting trio is completed by Samuel Kamanguza as Serge (uptight, self-important), and Ottery as neurotic Yvan. For Ottery, who co-wrote and starred in 2013 mockumentary This is Sanlitun, it’s the realization of a long-held dream.

“I was supposed to be in a production of Art five years ago, but it fell through,” says Ottery. “Sure, on the surface the play is very much about that old question, ‘what is art?’ But I actually think it is more about friendship.” Friends of the theatre should certainly check out this rare indie production of a Broadway classic; details below.

Sit inside a van with a fabric body The politics of individualism in Chinese modern dance