Lying comfortably in bed, Wang Ying, 29, doesn’t think having a baby was as difficult as people said it would be. In the 26 days since she gave birth to her son, aside from getting up a few times at night to feed him, she has had nothing to busy herself with—meals are served to her bed, warm bathwater is prepared, and she even enjoys an abdominal massage every day. This is all part of the 24-hour care offered by her “maternity matron.”

In China, maternity caregivers such as Wang’s are called yuesao, or 月嫂, with 月 meaning “month,” and 嫂 referring to relatively young married women. According to tradition, the month following childbirth is an important period of recovery for the mother. In this month, mothers are required to zuoyuezi, or 坐月子, which literally translates to“sit the month,” which means staying indoors, resting, keeping away from cold air and physical exertion, and focusing on nutrition. Yuesao, as the word implies, are married women who assist new mothers as they “sit the month.” They are on duty around the clock: cooking special meals for the mother, taking care of the baby, and serving as health consultants.

This crucial post-natal care, once done by older family members, is now done by paid professionals. Yuesao services have become increasingly popular in recent years, especially among young parents whose childrearing ideas may clash with the elder generation. 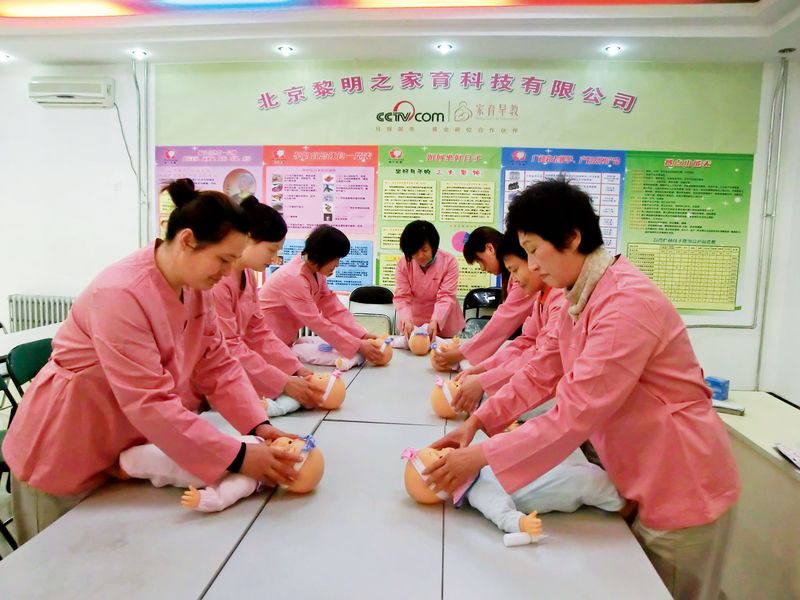 With the demand for yuesao increasing year after year, many yuesao have seen their salaries triple or even quintuple over the past 10 years in first-tier cities such as Beijing and Shanghai; certified yuesao specializing in areas like nutrition, lactation, and mental health are in especially high demand. Though it’s a profession that doesn’t require a university degree, yuesao can make more than many white-collar workers. The price to hire a yuesao for one month typically ranges from 6,000 RMB to 20,000 RMB.

High demand and decent pay are drawing more and more women to this emerging profession. Cui Jingwen, founder and manager of the Liming Jiayu Baby Care and Education Company and a council member of the Beijing Homemaking Service Association, has witnessed the great strides this industry has made over the past two decades. Cui worked as a midwife in a hospital until 2000. At that time, she says, there was no such thing as a professional yuesao. Babies were born and taken home by their inexperienced mothers. Often unaware of the tribulations of early motherhood, they came to Cui for help.

In 2004, Cui established her own infant-care center, recruiting and training professional maternity matrons. But in those days, the market was very different from today. Cui’s first training camp only recruited about 40 trainees, most of whom were laid-off female workers, and when they finished the training course, only two or three successfully found a job. “People of that time knew nothing about yuesao. They thought yuesao were no different from housemaids, but a yuesao costs almost three times as much,” says Cui.

Before long, this emerging service was getting noticed, garnering media attention for the services they provided and the novelty of the industry. However, real recognition came in 2008, when, in honor of the Olympic Games, many families decided to have an “Olympic baby.” The baby boom pushed the yuesao industry to new heights. “In 2007 or 2008, the market rate [for a yuesao] was about 2,400 RMB per month, and the demand far exceeded the supply,” Cui states. “Since then, the price for yuesao has been increasing year by year. And more and more people have joined this industry.” Today, Cui’s company employs more than 500 yuesao and most of them are fully booked; some are reserved seven months in advance. 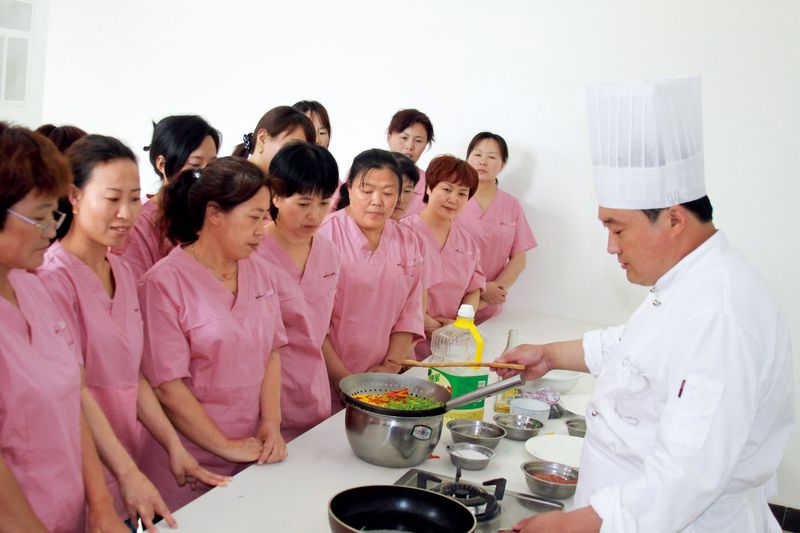 Cui tells TWOC that they have three basic requirements when recruiting yuesao trainees: they should be aged 25 to 45, have at least a middle school diploma, and have given birth before. People who meet these conditions need to take a three-month training program, which includes theoretical knowledge, cooking, singing to infants, massaging, and other subjects. Trainees take in-class quizzes and a final exam. Those who pass the exam can graduate from the course but still need to undergo probation period of several months before finally becoming a formal yuesao. When they are eventually assigned to a client, they are still regulated by working standards. Yuesao need to write a detailed work log and get approval from their client, indicating that they are satisfied with the service.

“A yuesao is not a babysitter. Ideally, they should pay 60 percent of their attention to the mother, and 40 percent to the baby. But in practice, most yuesao spend too much time caring for the baby, which results in the connection between mother and baby being broken to some degree. That’s not good for either the mother or the baby, but most yuesao and the family don’t realize it,” says Cui.

For many without a proper education or specialized skills, being a yuesao is an ideal career, or at least, one that commands a respectable income. Zhang Jige, a senior yuesao from Zhoukou, Henan province, has been working in Liming Jiayu since 2005 and was recently able to buy a house in her hometown. Zhang feels satisfied with her current job: “I feel that dealing with a baby and a mother is simpler than working in an office. You don’t have to worry too much about interpersonal relations.”

“You just need to take care of the baby and the mother, and when you become experienced, it isn’t that difficult,” she says. “I like babies.You can see them grow up day by day. The first day you come, the baby has just been born; but when you leave, they have learned to smile. That makes me very happy.”

But not everyone is as optimistic as Zhang about this career. Though the yuesao industry has developed quickly, prestige has not been as ascendant as the prices. Among the over 500 yuesao in Cui’s company, the majority only have a middle school or high school diploma. A yuesao working in Changchun, Jilin province, who prefers to be known as Zhao, decided to stop working as a yuesao after the Spring Festival this year.

“It’s too exhausting. I could never sleep for long at night. Most importantly, this job doesn’t sound good [to others]. I feel uncomfortable letting my relatives and friends know I am a yuesao, and I am afraid that people will think my son doesn’t treat me well [if I have to be a yuesao],” says Zhao.

Zhao is not a special case. Cui says only around 60 percent graduates from her company’s training program actually practice as yuesao. For those who leave the industry, the most frequent complaint Cui hears is that they’d “rather make no money than be a doormat in the [employer’s] family.”

But Wang, as a client, doesn’t think the client is the problem. “The problem is that the [yuesao’s] services should be worth the money paid,” says Wang. Though the yuesao provided a great deal of assistance during Wang’s recovery, she was also critical about some of their work: “I gave birth to my baby at midnight. Our yuesao didn’t wait for me to breastfeed my baby. Instead, she fed the baby with formula.” Wang was angry because she believes that if the babies are fed for the first time with formula, they will be less willing to drink breastmilk in the future and their immunity would be compromised.

“I think the yuesao knew that, but she just wanted to make the baby sleep so she could go rest,” says Wang. 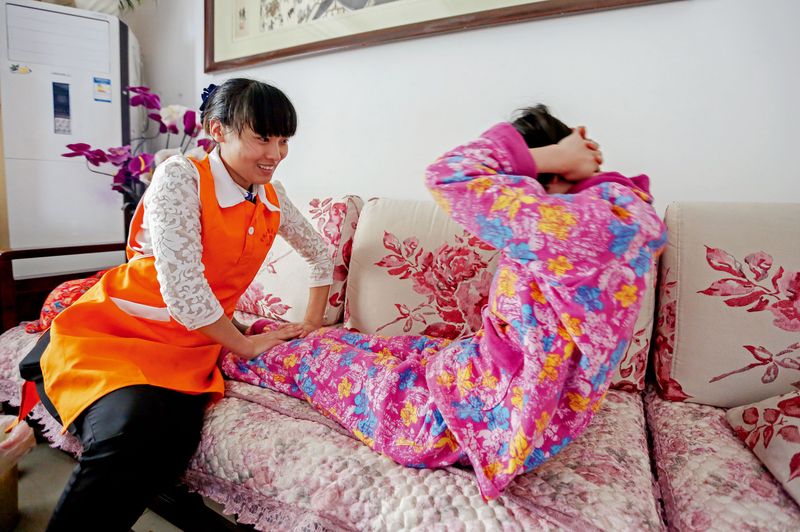 A yuesao assists a mother in postpartum exercises (VCG)

Cui confirmed that there are many reports of poor service in this industry. “Everything needs to be standardized. From the taste of food [yuesao] cook to how often they should air out the room, we all have strict standards [at our company]. But sometimes they just don’t follow the rules,” says Cui. “Last year, one yuesao from our company didn’t control the indoor temperature according to our regulations when she aired out the room.” The client cited this as the cause when and the baby later got pneumonia, and the company took responsibility. “We returned all the money to our client. But not every company has a compensation system like ours,” Cui says.

A lack of market regulation makes it difficult to guarantee the quality of the yuesao’s service, and, indeed, anyone can call themselves a yuesao. They get in touch with their clients through online platforms, and if there is a dispute, they can just disappear. There are many organizations providing yuesao courses and certificates, many requiring only one week of training.

In 2015, Chinese authorities issued the “Quality Standard for Maternal and Childcare Service” regulation, which came into effect in February last year. According to the regulations, professional yuesao will be graded in six levels from “one-star” to “gold medal,” and each grade has clear requirements for work experience and professional skills. But ultimately these standards are just recommendations, and there’s no enforcement. “What makes a good yuesao? Professional training, strict management, and effective supervision, but none of these things are done well enough,” says Cui. 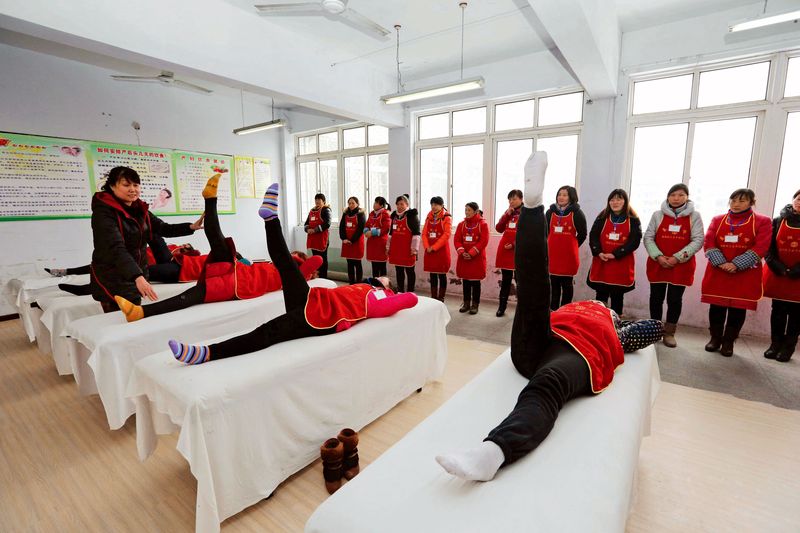 The surging price for hiring yuesao is yet another problem for this burgeoning industry. Cui says she believes that the current high prices are unreasonable and that the bubble could burst at any time. In 2015, the decades-long one child policy ended. According to China’s health authority, the number of newborns in 2016 reached almost 18 million, which was 1.3 million more than that of 2015. But the demand for yuesao didn’t see as sharp an increase as people expected.

“I think it reflects that the general public has become rational again after a blind craze. The price [to hire a yuesao] now is too high. I think 10,000 RMB to 15,000 RMB is a good price. It shouldn’t get any higher,” Cui says. “In the past, customers and some unscrupulous people blindly bid the price up. Now, it’s time to change. People in the industry should stand and burst the price bubble or the industry won’t develop smoothly.” Cui is planning to lead this change, but she knows it won’t be easy. After all, every yuesao in her company is looking forward to a pay raise.

The price bubble also draws attention away from other valuable aspects of a yuesao’s work. “Currently, the public and the media pay too much attention to the income of yuesao. Most people, including yuesao themselves, don’t see the real value of yuesao as a profession. When people encounter a legal matter, they will go to a lawyer; when people become ill, they will see a doctor. That’s what ‘profession’ means,” Cui says. “But after a family has a baby, the idea of needing a yuesao may not cross their mind. That’s what we need change in the future.”

Maternal Instinct is a story from our issue, “Wildest Fantasy.” To read the entire issue, become a subscriber and receive the full magazine. Alternatively, you can purchase the digital version from the App Store.