The Mao-era public radio speakers are disappearing from China’s villages, but not everyone is happy

Wake up at 7 a.m. in rural China and you’ll likely hear the melodic strains of a love song, a popular talk show, or the local news wafting from an old speaker strung up on a telephone pole in the largest public space in the village. This is wired radio. Unlike its better-known counterpart, the wireless radio, this device doesn’t let individual users turn the dial but instead transmits content by telephone wire from a pre-set local county or provincial station three times a day until around 8 in the evening when, as if on cue, the lights flick off and doors are shut across the village as the announcers sign off for the night.

At one point in China’s history, these devices were found not only in the village streets but most homes and work units across the country; farmers were even able to listen from speakers strung up above the fields as they worked. Since the mid-1990s, however, wired radio has been a casualty of the Chinese government’s push to bring digital communication to the countryside under the heading of “connect every village.” The success of these programs has allowed certain villages around China to develop economies based on e-commerce. The transition to digital and satellite television is also almost complete in the Chinese countryside, which now enjoys a variety of national and international news channels as well as entertainment options, from serial dramas to reality TV, on par with any urban household.

Amid this multiplication of media devices and content, not all are content. Xing, a resident of a small village in central Zhejiang province in her mid-40s, complains about the lack of maintenance given to her village’s wired radio systems. She says when the digital cable was installed in her daughter’s home, she and some of her neighbors asked the village official to let them keep the radio speakers attached to their old TV cables, to maintain these devices, and to let them continue to broadcast.

Xia, an official in Xing’s village, responds that in the past most village affairs were organized by using the wired radio infrastructure, like a PA system, but this is no longer needed as most villagers have mobile phones and could be reached on WeChat. However, Xing’s neighbor, 60-year-old Gang, isn’t convinced by the explanation. In the countryside, he says, “we know nothing…but when we have wired radio, we know something.”

The present value of wired radio—known in Chinese as 有线广播 (wired broadcast) but sometimes literally as 大喇叭 (big loudspeaker)—is based in the ideological dimensions of media and mass communication in China historically and now: what is being communicated, why, and to whom. Whereas to Western commentators, it’s the top-down nature of broadcasting over centrally controlled speakers that deserves censure, in China the central conflict is between developmental imperative to provide access to the most cutting-edge technologies—such as digital cable and smartphones—and the notion of public service that was embodied in wired-radio. 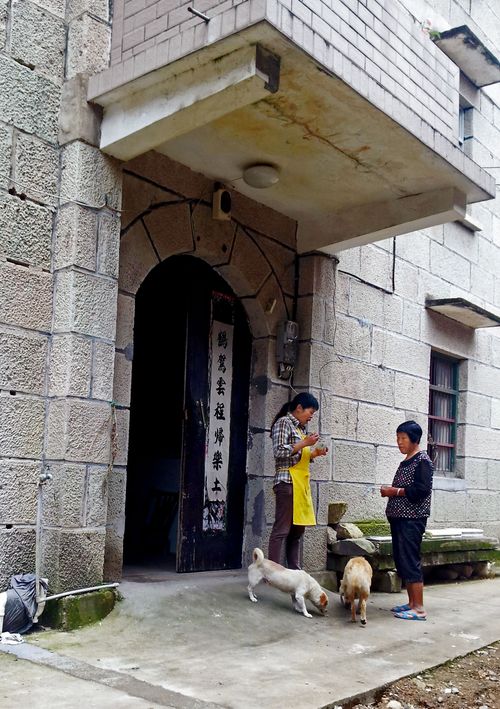 Wired radio hit China en masse in 1950, almost immediately following the victory of the Communist revolution. Tasking itself with the goal of propagating national policies and a worker culture, the Chinese Communist Party made the spread of radio speakers a priority, and every work unit, school, and residence in the country was encouraged to develop a radio system to be able to re-transmit the Central People’s Broadcasting Station.

Seen as a particularly useful means to provide information of a new social system to an illiterate and rural population, the policy for developing local wired radio infrastructure was formally introduced to China’s countryside in 1955 and led to several years of rapid increases of access to what, for most people in the villages, was their first electronically transmitted media. Wired radio would prove to be so popularly received that the number of speakers continued to increase during the Cultural Revolution even when other electronic media, like television, went into decline.

Wired radio systems feature a central wireless receiver or a tape deck that can retransmit broadcasts. Transmissions were initially played on speakers from a location such as a village square, but the devices were later installed in the homes of the residents. Broadcasts were largely from national and provincial stations, but thousands of counties set up their own stations to add some locally relevant content.

As the older residents of Xing’s village recall, these broadcasts were part of the general environment of the village. Hong, another of Xing’s neighbors, explains that in the days when the “big loudspeaker” was ubiquitous: “In the morning we would listen to the radio when we went to work. We could hear radio from the fields, and know [when] it was time to come home to cook.” These were, of course, broadcasts with a particular and inflexible ideological aim, but according to Hong, it would be a mistake to see the ideological dimension as separate from the normal practices of village life in that era, or merely as something imposed from without. “Mao Zedong thought was important in that time,” she argues.

In some sense, the value that Xing and her neighbors’ continued to place on wired radio reflects their remembrance of a time when, officially, all art and entertainment were made for and by workers. In Mao’s era, wired radio broadcasts were scripted in vernacular language, but many peasants also took part in repeating broadcasts in local dialects over the “big loudspeakers” from makeshift studios set up right inside the village so that knowledge could be further localized and made relevant to all. The content of broadcasts was often rurally oriented, featuring information such as farming techniques or movies coming to the village. It was a means for villagers like Xing to feel empowered to participate in the affairs of village and nation.

The Mao-era loudspeakers and metal-and-wood-framed radio boxes do not exist in most of China these days. In the 1980s, as county-level television stations were provided new opportunities to develop, telephone lines that connected wired radios across the countryside were replaced with television’s coax cable. At the same time, the clunky, old-fashioned Mao-era radios where replaced with smaller plastic versions that feature volume control. Still today, some of the poorest and most remote villages in China are setting up their first wired radio systems. The central government also spends money to maintain the essential infrastructure of these systems so that they can be used for emergency communication.

Generally, however, wired radio has become a neglected medium and is becoming unrecognizable in content if not infrastructure. In Xing’s village, a few remaining speakers still play the same local county radio station that largely rebroadcasts provincial broadcasts. You can go on the street or to one of a few last homes with a functioning speaker to listen to “The Voice of Zhejiang,” a news and talk-show channel of Zhejiang People’s Radio that bills itself as “the common people’s news platform.” While the provincial broadcasting stations in the post-Reform era are still state-owned, they take ad revenue, and the content of the broadcasts has shifted to commercial entertainment designed to appeal to urban listeners and consumers. Where once political content was broadcast on the radio to agitate the people into mass campaigns to rejuvenate the countryside, the radio, as with other mass communication media today, lacks representation of rural interests, and villagers who tune in are bombarded with commercials selling lifestyles that most cannot relate to or afford.

Demands for the revitalization of wired-radio in Xing’s village, however, are not about reverting to the past or rejecting the advances of technology. It’s commonly repeated among Xing and her neighbors that television is better than radio since, “it is more interesting to be looking at something.” The two-way communication enabled by the smartphones, which most of them own, is also accepted as a crucial platform for modern living. Quan, a former village team leader, explains that smartphones “are a way of communicating and learning about the world outside the village.”

It’s rather, as Xing and her neighbors argue, that the communication practices that once made them feel represented and politically empowered by the media are gone. Ming, another neighbor notes that since the county station’s recent conversion to digital, for most households, “If you want local news you have to have digital, but it is too expensive.” Their concern is not to do away with these new platforms but to address the localization of media production and use. In their reasoning, preserving the wired radio symbolizes the lasting values of China’s socialist legacy of relying on the masses and peasant demands for collectively accessible, locally relevant, and politically empowering knowledge. As wired radios continue to disappear from their perch in the village streets and homes, the ideal of a media system for and by the masses in China may finally wither away, even as a memory.

Tangled Web of Wired Radio is a story from our issue, “Wildest Fantasy.” To read the entire issue, become a subscriber and receive the full magazine. Alternatively, you can purchase the digital version from the App Store.