Not everyone can be Jack Ma. Last year, the Global Times reported that though JD.com, China’s other large e-commerce giant, had improved its struggling business with its “618” shopping holiday, its gains were “not comparable” to Alibaba’s annual “Double 11” e-shopping spree.

But if no one can top Double 11 for sheer transaction value, they can at least go for quantity over quality. Jing Daily has done a write-up of “fake” shopping festivals that have been created within the last decade by Chinese retailers and e-commerce platforms to attract visits from “hand-chopping” shopaholics year-round; we won’t bother with all the minor “business anniversary sales” that they’ve listed, but let’s try to sort out the major ones throughout the year that involving multiple retailers, various confusing deals, and “preview periods” that start earlier and earlier each year  (though as you’ll see from our list, Alibaba’s platforms end up dominating most of these holidays anyway).

The online shopping juggernaut. Single’s Day started sometime in the 1990s on university campuses as a self-deprecating way for single people to offer themselves a night out. In 2009, Tmall.com, then known as Taobao Marketplace, spotted the marketing potential in encouraging single people—and everyone else—to treat themselves to a night (and day) of shopping as well.

Where: Tmall is the originator, but deals can also be found on other Alibaba sites, other e-commerce platforms such as JD.com, Suning.com, and YHD.com, and physical stores, because not slashing prices on China’s biggest shopping holiday is the surest way to alienate customers.

What: Price discounts on products—some of which are announced ahead of time with a “Double 11” icon, but some merchants, especially smaller merchants on Taobao, will simply mark down the price on that day; there are also “red packets” containing cash credit or rebate deals through Tmall and Taobao, which you can either claim on the product page or by playing Tmall’s “red packet rain” game, where you basically click on the falling red packet icons and see what amount you win.

When: Merchants start announcing their deals as early as October. You can stock up on red packets during the “preview” period from November 1 – 11, which is also when all the marketing events and celebrity appearances happen. The actual discounts start at midnight on November 11 and finish at 11:59 p.m.

Highlights: During 2016 edition of “Double 11,” transactions on Tmall and Taobao reached 1 billion RMB within 52 seconds. By the end of the day, Tmall customers have spent 120.7 billion RMB. 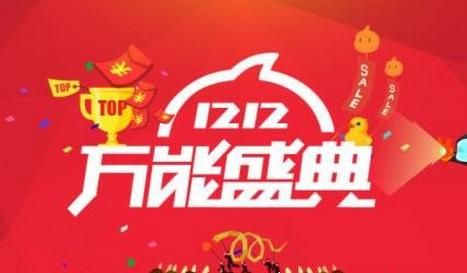 “Double 11” is an annual windfall for the merchants of B2C platform Tmall, whose major difference from the merchants of Alibaba’s other major platform, Taobao, is that they are registered businesses with licenses and oftentimes a physical store. So to throw the small merchants and C2C resellers of Taobao a bone, “Double 12” was born (or more cynically, why wouldn’t you want to have a shopping season that basically lasts from early November through December through to Christmas, New Year, and Spring Festival?)

Where: Mainly Taobao.com, but again, other platforms participate due to fear of missing out

What: Taobao’s “1212 Shopping Madness”, as it’s officially known, claims to offer a “different shopping experience.” In addition to merchants offering discounts on their products, buyers can also add products to their “1212 Wish-lists” ahead of time, and the system will send the merchant reminders to mark down the item (you can also send the request yourself). Whether you get a discount, and how much, is up to the merchant. There are also red packets from Taobao.

On JD, various departments offer rebates on purchases over a certain amount. 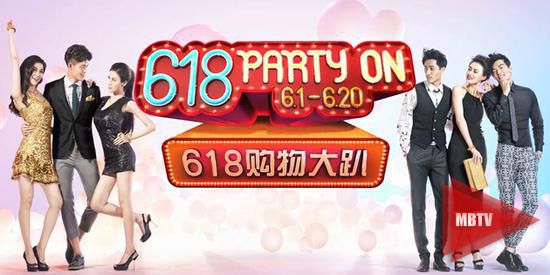 This was started in 2010 by JD to celebrate its founding anniversary—it started life on June 18, 1998 as a commissioned seller of “optical products” (think DVDs and CD-ROMs). The 2017 edition of the mid-year shopping festival was the biggest yet, with a heavy marketing campaign, many offline stores joining the fray (especially phone vendors), and 119 billion RMB worth of orders placed on JD.com by the end of the day.

What: Steep discounts from merchants (merchants have accused JD of forcing them to mark down prices), red-packets and rebates from JD

When: There are deals offered all throughout June. This year, customers could start “snatching” red packets from JD starting May 25. On July 18, there were 618,000 RMB worth of red packets released every hour. China’s most controversial shopping holiday, the former socialist day for commemorating women’s rights movements (adopted by the United Nations in 1975) has been co-opted by the interests of capitalism and redubbed “Queen’s Day” (女王节) at least on Taobao and, as of this year, JD. Women, as well as everybody else, are encouraged to shop for gender-identifying products.

What: Other than regular discounts and rebates, several product categories on Tmall have products priced at 3.8 or 38 RMB. In the past, discounted products on Suning have tended to be household items like home appliances and baby products, though this year, they were advertising buy-two-for-one deals on cosmetics.

When: While March 8 is the actual day, March 7 has been designated “Girl’s Day” (女生节, “Female Student Day”) on many college campuses, prompting businesses to cash in. On Tmall, some sales start as early as March 1.

Highlights: Though there is a public outcry each year over the commercialization of Women’s Day and its gendered trappings (like the overuse of pink in advertising and unfortunate Baidu doodles), the All-China Women’s Federation has not officially censured the practice; the closest was when a federation representative reportedly told China Youth Daily (Chinese) this March that shopping was “embroidery” while women’s struggle for equality was the “traditional content” of the holiday. Also this year, an opinion piece (in Chinese) in the federation’s newspaper, CN Women, cautioned against the “vulgarization” of the holiday.

China Unicom has hopped on the hype train. This “shopping festival,” started in 2011, is actually just a period when the telecom operator offers discount mobile phone and data plans to its customers—but that logo could fool you into thinking it’s yet another general shopping holiday. It seems that borrowing the concept of shopping festival can now be a marketing strategy for other events; the name of this event is also a pun, though not clear if intended, as 网购  (wǎnggòu) usually means “shopping on the internet” but could be read as “shopping for the internet.”

What: In 2017, China Unicom offered 50 percent off on a phone plan with unlimited calling minutes and data and a service that allows customers to stream videos without using up their mobile data 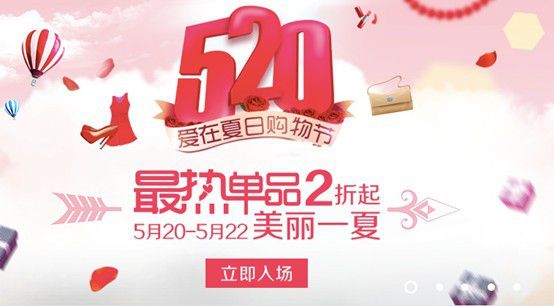 One of the recent holiday to be co-opted by e-commerce, albeit one that netizens “made up” sometime in the early 2000s based on the 1998 Mando-pop song “Number Love” by Mavis Fan. In the song, the number 520 is a homonym for “I love you,” and May 20 is supposed to be a day for men to make confession of their feelings to women—accompanied by gifts. So what better way to encourage the purchase of said gifts than to create a shopping festival?

Where: Online and offline shops. Many bakeries tend to offer discounts on this day.

What: Some discounts and group-buying deals, especially for items like jewelry, chocolate, cake, mugs (杯子 bēizi, a homonym for “a lifetime”), and wooden combs (symbol of devotion in ancient China). In the past, luxury e-commerce platform Shangpin.com offered steep “Internet Valentine’s Day” discounts, but this year it appears to have been rebranded as simply a “Store Anniversary Celebration Sale.”

When: May 20 – 21: Per “tradition,” May 21 is the day that women who’ve been feted with chocolates and flowers are supposed to respond to the man’s confession.

The 28th every month: “Alipay Day” 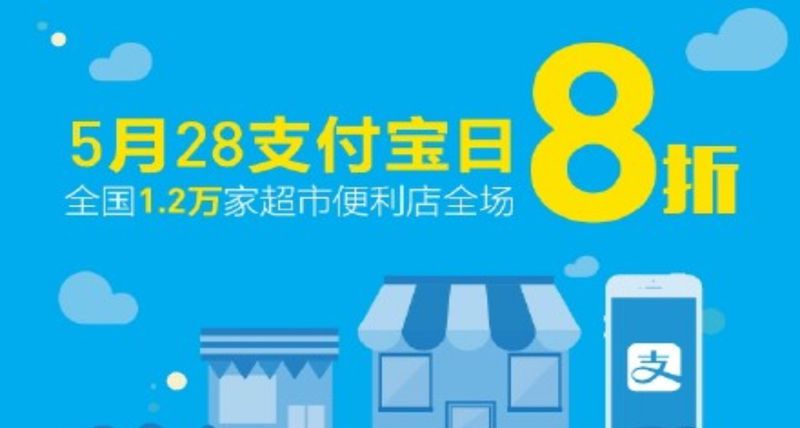 This short-lived festival was started and named after Alibaba’s e-payment platform in May 2015. This is an offline event held at participating supermarkets and convenience stores, which will offer up to 20 percent off on all items when paying with Alipay. Though initially restricted to the 28th, the event was soon expanded to the 28th to 30th, and then changed to a lottery in the fall of 2017. We haven’t found any report of it happening after October 2015, though there were stores offering their own Alipay-related discounts on various days, so look out for the signs in your neighborhood.

Christmas, solar New Year, Spring Festival, Mid-Autumn Festival, Mother’s Day, Father’s Day, and, in fact, pretty much other Chinese or Western holiday apart from Qingming (“Tomb-Sweeping”) Festival are also peak shopping periods. Spring Festival tends to be the biggest and longest shopping festival of all, starting in early January as consumers purchase gifts and “festival goods” (年货)—usually price food items, such as meats, fruits, and nuts, to celebrate abundance and offer as treats to one’s Spring Festival’s guests. Christmas shopping is a more recent tradition, with discounts on jewelry for couples and Christmas displays and markets held in various cities.