Welcome back to the Viral Week and happy Monday to everyone back at work. Coming up on today’s issue, we bring you the return of the pervert magician, when cupping fails, cutting off a baby’s penis, the woes of PLA recruitment, and Chow Yun-Fat relief work. But first…

Last week a man in Hubei province was stopped by local law-enforcement under the suspicion of drunk driving.

Having exited the vehicle, the man was then made to take a breathalyzer test to determine his blood alcohol levels. Instead of blowing in normally, the man decided to take the opportunity to “shake what his mama gave him” while breathing into the test device.

Despite the best efforts of his police-proximity lap dance, the man was found to be under the legal limit—his levels were only a measly 10mg per 100ml.

The man was then allowed to drive away with only a warning (presumably because his dance moves were so fire that the officer was burned a little).

Two months ago, a “magician” was jailed for 14 days in Chengdu after conning women and fondling their breasts.

Well, after his fortnight in jail, the culprit, Chris, has returned to prowl the streets and find ways to molest women.

His latest trick involves offering women a deal: if they allow him to motorboat them for five seconds, then he will donate 10n RMB to the Red Cross Society of China. While this may seem like an obvious pervert ploy, there were women who agreed to the terms.

But only in the privacy of an empty stairwell (Shanghaiist)

It is unclear whether or not these “women off the street” were indeed real participants or hired actors. As for donations, there have been no reports that either confirm or disprove that money was sent to the Red Cross.

Remember the Chinese medicinal practice of cupping that was popularized by celebrity Olympian Michael Phelps?

Well, despite the intrigue that this could help a person swim superhumanly fast, cupping is practice that can go wrong.

Hu is a man living in Wuhan, Hubei province. Last week, he had his wife initiate cupping on his back with a popular home cupping kit. After the allotted time, his wife attempted to remove the cups but found that one of them was stuck on too tight. She tried with both pliers and hammers, but the cup still refused to disengage itself.

Hu quickly visited the local clinic but was told that there was nothing they could do.

After another hour, his son drove Hu to a hospital. The doctors there decided that the fire department was the service to call, and soon firefighters were on hand to saw the cup off. 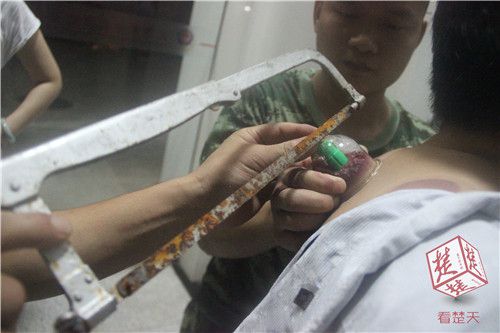 Using the rustiest saw they have (Chutian Metropolis Daily)

Speaking of emergency services, a baby was rushed to a hospital in Jiangxi province after it was discovered that his penis had been snipped off with a pair of scissors.

The incident apparently occurred as part of a revenge ploy acted out by the boy’s mother. According to reports, the mother had divorced the father a year ago and had remarried. Unfortunately, an unknown entity prompted her to seek revenge against her ex-husband and his family.

The boy’s condition was stabilized after surgery and doctors are hopeful that he will regain the ability to sire children if treatment goes well. Meanwhile, police are still investigation the mother.

In a recent article by the People’s Liberation Army Daily, nearly 60 percent of all armed service applicants from a particular town failed their physical exams.

In response, the Defense Ministry have released statements saying that the reduction in enrollment numbers are more due to an increase in higher quality applicants. They go on to say that they are able to guarantee the quality of the recuits who make it through selection.

This news comes a few weeks after a report stated that the armed services need to be wary of more and more soldiers being negatively affected by mobile gaming addiction—soldiers whose quality have presumably been guaranteed by the Defense Ministry.

To end with some good news, Chow Yun-fat, posterboy for heroic bloodshed and serial selfie specialist, was caught on camera clearing the streets of Kowloon of debris from Typhoon Hato. 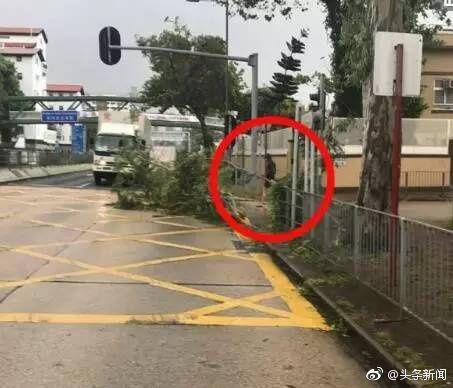 Dressed in a dark hoodie (@头条新闻)

One local was out and about when he came across Chow removing fallen trees and branches from the road and, in pure Chow-fashion, managed to snap a selfie with the man himself. 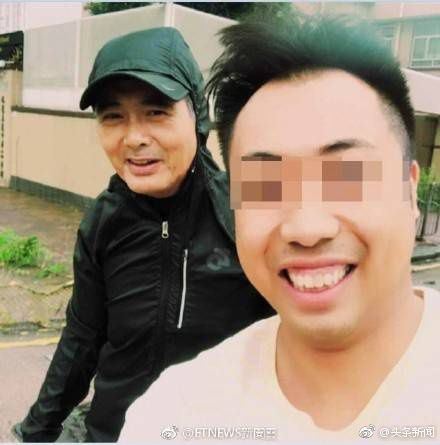 According to Apple Daily, Chow was on his way home when he realized that the streets were blocked. He decided to help remove debris to help others (and himself) get home safely.