Police in Chengdu have detained a Shanghai video blogger who goes by the name “Chris,” after a viral backlash against a video that appeared to show the blogger openly molesting women on the street. Within a day of the outrage breaking online, police opened an investigation into the Weibo footage, which concluded yesterday with the self-proclaimed “magician” and his producer being sentenced to 14 days’ detention.

Investigators say that over the last three months, Chris has uploaded 57 similar videos. Thus far, only eight victims have been identified, four of whom have since been in contact with the police. Whilst being questioned, Chris, who describes himself as a “prankster,” initially claimed that all the women in the videos were actresses. Police maintain that the women were strangers, chosen at random, who did not know what was going to happen.

The video in question starts with Chris approaching several young women, asking if he can show them a street-magic trick. He proceeds to give them a coin, asking, “This is a coin, right? Have a look, see if there’s anything wrong with it. It’s fine, right?” He continues: “Now, you’re about to witness a miracle.” He orders another of the women in the video to “Stare straight at this coin; you absolutely mustn’t look away, okay? Keep looking at it.”

He then takes the coin back, places it in his hand and uses the same hand to grope the women’s breasts.

“But you’re touching my breast!” one woman protests. 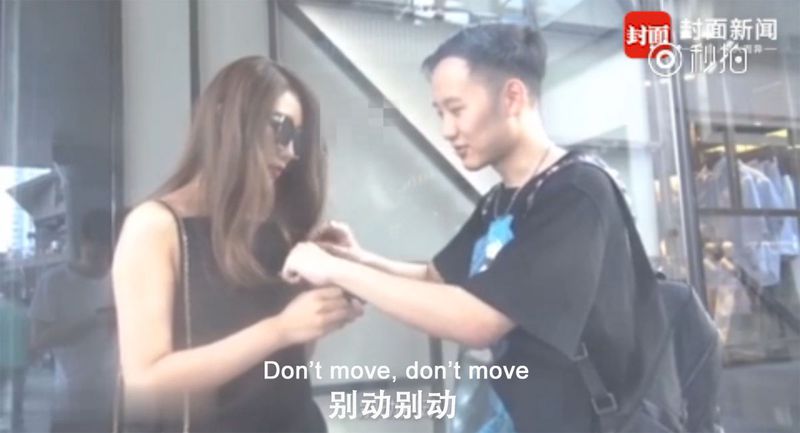 The ‘trick’ continues as Chris counts down from three, saying that he is going to make the coin “move inside [their] underwear”. When he finishes counting, Chris simply drops the coin on the floor, laughing, “And now, the trick’s worked, can you tell?”

The women’s reactions are mixed–a couple laugh, but most look perplexed and nervous. One asks if Chris feels awkward about the trick, while another tells him to “Let go, let go, let go!”

The incident is the latest high-profile example of a string of video and live-streaming related stories to hit the headlines this year. Some Weibo users argue that the video highlights the dangers of agreeing to do things just because one is being filmed. In January, widely anticipated new legislation was introduced, restricting online content following a clampdown on the industry in recent years, which has included several arrests and court cases over indecent content.