Homemade helicopters, replica tanks and biplanes built from scratch: These are just some of the many whacky products cranked out by China’s less-celebrated innovation sector, the amateur inventor, often an old farmer or enthusiast with too much time (and money) on their hands. Here, we pay tribute to those dedicated inventors who have toiled away in obscurity often just to make someone on Weibo go, “Huh, cool.”

Laid off from a textile factory in 2008, Wuhan-based Zhang Wuyi decided to keep his head above water by going into the submarine-building business. Zhang’s wrought iron dual-seat miniature subs can reach 20 kilometers per hour, and dive 30 meters below sea level for up to 10 hours, which has proved useful for combing the seabed for prized products like sea cucumbers and shellfish. A Dalian businessman bravely paid 100,000 RMB (15,855 USD) to become Zhang’s first customer and was delighted to catch 50 kilos of cucumber in 40 minutes, using the sub’s robotic claw and underwater cameras.

Zhang’s submariner startup uses a fin-tail patent by Li Yuming, a pioneer of the amateur sub-building trade from Anhui province, whose Twilight No. 1 was completed in 2005. Since then, numerous fellow farmers have joined the field with their own self-built submersibles, including 44-year-old Tan Yong, who built a 1,000-kilogram vehicle capable of diving 10 meters, and Anhui’s Zhang Shenwu who built a six-meter, two-ton torpedo capable of slipping just a single meter below the waves—but cost less than a bomb, at only 5,000 RMB. Now with over 10 employees and a workshop, Zhang Wuyi has found a niche market that looks certain to keep swimming along. 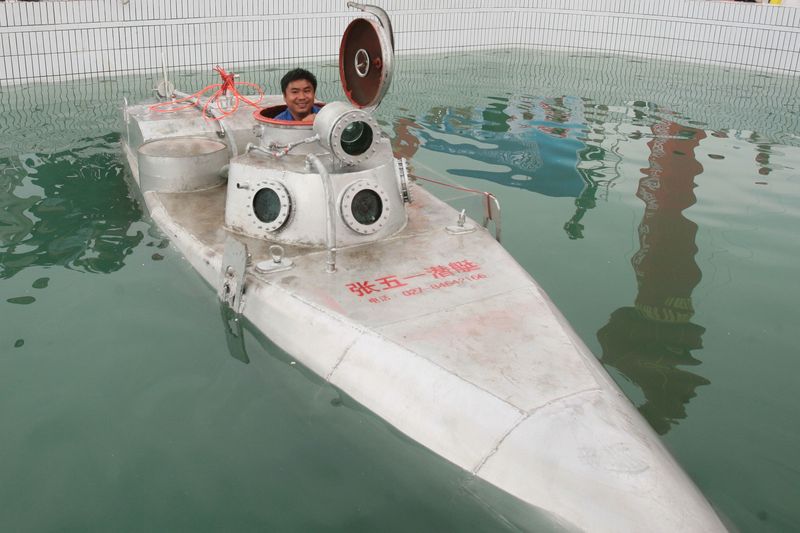 Zhang Wuyi tests one of his submersible creations (VCG)

A Hunan father and son have made a career out of building Transformers. Not the electrical equipment, mind you; this pair builds sculptures of the famed Autobots and Decepticons. Using old car parts and an abandoned factory as their workshop, the pair took three years to construct their first from a set of blueprints found online. Now they’re making over a million RMB a year by cobbling together as much scrap as they can and fashioning them into giant replicas of the Hollywood robot leviathans. Pictures of the duo did the rounds of social media in 2015, detailing how they make their money from businesses that wish to advertise themselves with a giant robot Transformer out front. Apparently, it’s a pretty popular design choice. 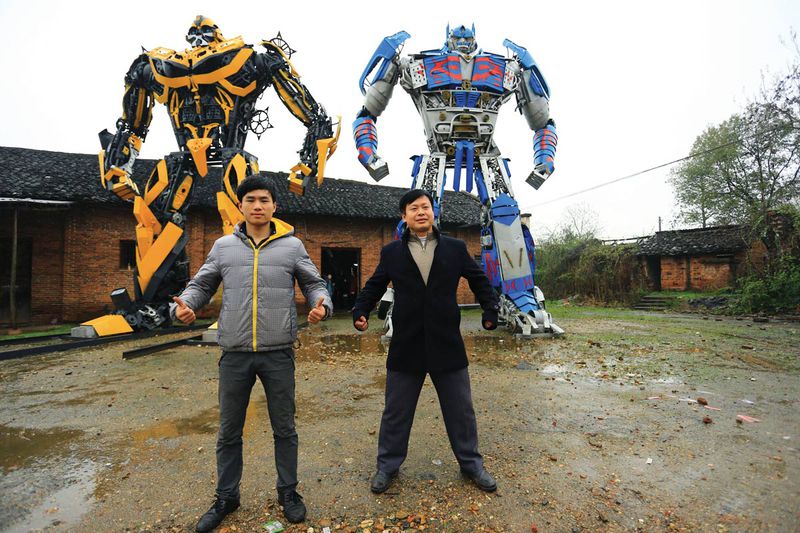 There may need to be a new law of robotics for the 21st century: Wherever you find male inventors, “sexy” robots are sure to follow. For some reason, inventors rarely pour their efforts into constructing handsome male cyborgs, but fembots seem to emerge every other month. China’s best-known example may be its University of Science and Technology’s Jia Jia, who debuted in January at an economic conference where she greeted guests and answered sleazy questions (yes, “she” is single and, yes, someone asked a robot that question. Then again, she did tell a conference guest, “You are handsome,” greeted her creator as “Lord,” and asked the media not to make her face look “too fat,” so maybe the programmers are to blame). 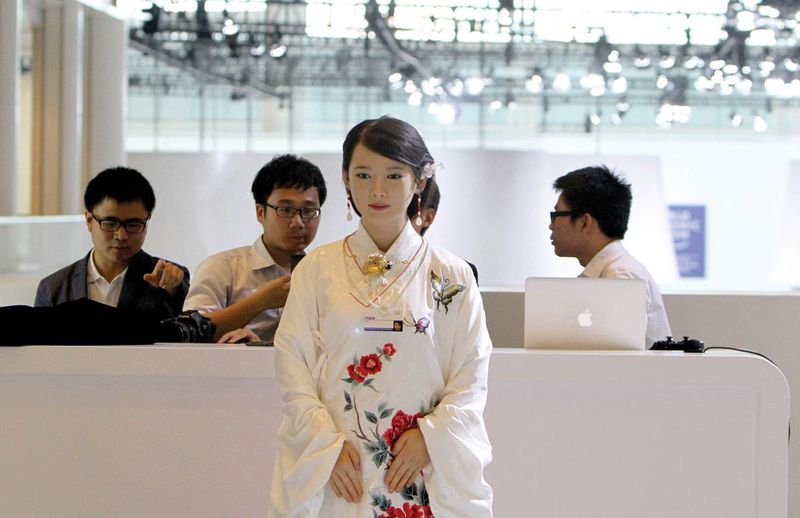 Meet Jia Jia, a robot who is technically single (VCG)

Chen Xiaoping, who leads the team of developers behind Jia Jia, has high hopes for humanoid robots like her in the hospitality and healthcare sectors, as Jia Jia can apparently answer simple questions and recognize the gender of those speaking to her. After Jia Jia was invited to act as special reporter for Xinhua, the state news agency declared the fembot could “revolutionize journalism.”

China Business Insider breathlessly reported in 2016 that Chinese restaurants are replacing waiters with robots, but though one year has elapsed, this is definitely still not a “thing” in China. Yes, there has been the occasional diner that has introduced robots as an attraction—such as Guiyang’s Taste and Aroma restaurant or the House Café in Beijing—but they basically move along a pre-programmed route and take orders which, given the sketchy voice-recognition software, they tend to bungle. This means that human hospitality staff are still necessary, and apparently in less danger of losing their jobs than their robot replacements: In April 2016, three robot restaurants in Guangzhou “fired” their automated staff for incompetence, and two shut down. “Robots could not carry food with too much liquid and also frequently break down,” a restaurant staff member told Worker’s Daily. Arguably, the more effective form of automated waitstaff remains the humble vending machine.

China has long had a bit of an issue with fake or copied products, known locally as shanzhai, but sometimes you can’t help but admire the ingenuity that went into the copying. When 28-year-old Jiangsu native Wang Jian built a replica Lamborghini in 2012, it not only resembled a 2007 Lamborghini Reventon on the outside, but was capable of speeds of up to 160 mph (according to the Daily Mail). Although the car is somewhat less shiny and polished than the real thing, it’s not just a copy—at a cost of less than 8,000 USD, it’s a steal. Would-be robbers should be aware that China also has its own shanzhai Batmobiles: “Tumbler” versions, seen in The Dark Knight, are being rented out by Shanghai prop maker Li Weilei for 70,000 RMB apiece, and displayed all over the country. They’re not actually mobile, but it’s still a business model that Wayne Enterprises could get behind. 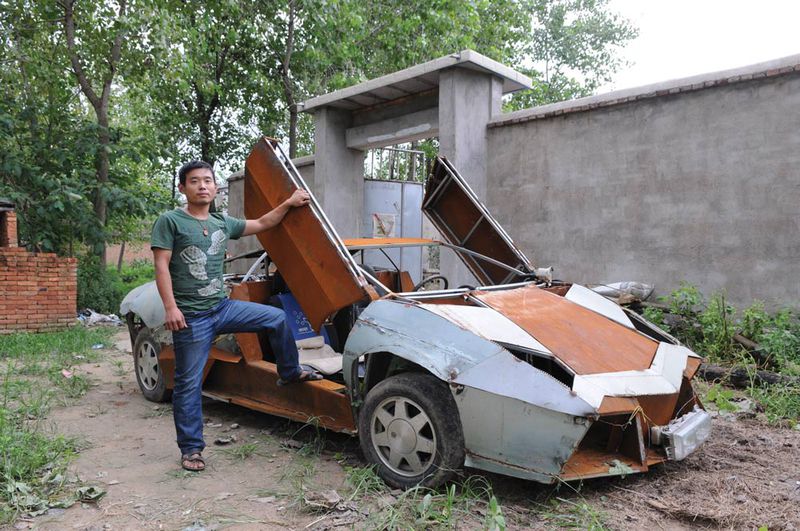 China’s Tinkerers is a story from our issue, “Down to Earth.” To read the entire issue, become a subscriber and receive the full magazine. Alternatively, you can purchase the digital version from the App Store. Forget Transformers. David Dawson gets in the ring with China’s real-life robot warriors