In 2000, the passing of Chuonnasuan, the last full-fledged shaman of China’s northeastern Oroqen people, marked the extinction of the indigenous Oroqen religion—but at the time of his death, Chuonnasuan had not held a communal healing ritual in 48 years. Decades of “anti-superstition” policies, a hunting ban, intermarriage, and urban migration—both voluntary and forced—led to a steep decline in the cultural traditions of the former hunter-gatherer minority.

The fight is now on to save at least one other aspect of Oroqen culture: its language. Researcher Liu Jie (刘杰) estimates that over 90 percent of Oroqen under 50 cannot speak the indigenous language.

Liu is a retired civil servant and leading researcher on Oroqen culture within China. He has been developing an online learning platform for teaching and preserving the language. He spoke to TWOC about the challenges of preserving a cultural heritage that many in the community feel are of little relevance to their modern lives—and that, until recent decades, was officially discouraged by the government bodies now scrambling to preserve it.

Who are the Oroqen, and why is the loss of their indigenous language so severe?

The Oroqen is one of the smallest ethnic minority groups in China [editor’s note: it is China’s fifth smallest ethnic group as of 2010, with a population of 8,659]. They traditionally lived by hunting, in the Greater Khingan Mountains of China—Heilongjiang province and Inner Mongolia. The language is at severe risk of extinction because Oroqen has no written script; people above the age of 50 still use it in their daily lives, but young people and children lack an environment where they can practice or have a need to use Oroqen. As a result of the settlement policies of 1953, the Oroqen were encouraged to give up their hunting livelihoods and settle in agricultural villages, which had a positive effect on their population numbers. [Shortly before this, in the summer of 1952, Chuonnasuan performed his last public ritual, the melancholic three-day “sending away of the spirits” ceremony documented by American psychologist Richard Noll in the 1990s]. Virtually no Oroqen youth under age 20 can speak the native language. In recent years, many nationally recognized performers of mosukun [traditional Oroqen sung narratives] and folk artists have passed away or are elderly; few people can make birch carvings or traditional costumes. Youths would rather learn songs from mainstream movies than traditional folk songs.

What are some efforts made to preserve the language?

In the 1980s, several schoolteachers in Oroqen villages began to phoneticize the language using IPA or Chinese pinyin, and create their own textbooks and Oroqen language classes. In 2003, the province of Heilongjiang created standardized textbooks and language courses for all the primary schools for the Oroqen, which had a positive effect on the preservation of the language. I began to do fieldwork in the remote Xin’e village in Heilongjiang province in 1996. In 2013, with other researchers and Oroqen leaders (including Oroqen linguists, educators, and the Oroqen Ethnic Center School in Tahe county, Heilongjiang) we began to develop an internet-based tool to not only promote basic competence in the language, but to also serve as a platform for real-time conversations, the sharing of cultural stories and songs, as well as promote tourism. By 2016, with support from the provincial government, we were able to successfully launch the Inheritance and Preservation of Northern Minority Languages and Cultures website at bfssmzyy.com. 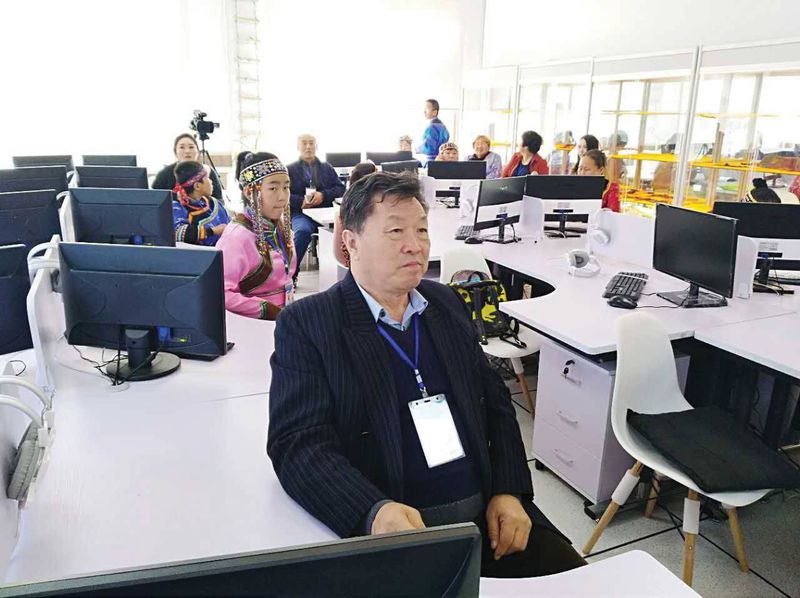 Who uses the platform and how does it work?

Learning resources on the site combine audio recordings, pictures, videos, and animation. Because the Oroqen language has no script, the site’s learning resources include recordings in the two major Oroqen dialects in Heilongjiang and written text in Chinese and English for reference. English-Oroqen lessons extend the potential future reach of Oroqen speakers outside of China. There is Flash animation to demonstrate Oroqen expressions for everyday use, as well as situations and objects people might encounter in ordinary life. These lessons are free and can be accessed at any time, and the content is accessible to any education level. We also plan to use the website to promote the intangible cultural heritage of the minority groups—including clothing, handicrafts, birch carvings, embroidery, and folk songs—all across China. Eventually, the site will offer learning resources for other nationalities in Heilongjiang, including Hezen, Daur, Evenki, Kirgiz, and Xibe.

How do members of Oroqen communities feel about these preservation efforts?

An Oroqen elder, who fears the language will die out with his generation, [told me] the Oroqen are embarrassed that the youths can’t speak the native language, but also said that even if efforts are made to promote bilingual teaching, there’s no ‘language environment,’ as youths simply don’t feel like the language is useful to their lives. In the summer of 2015, many important cultural representatives from the Oroqen nationality have made recordings for the system: Guan Kouni, the “last shaman” [Guan was still an apprentice at the time of the “sending away of spirits” in 1952, thus not considered a full shaman by Noll], Oroqen folk singers Guan Jinfang and Mo Guiru. The platform now has a usership across the community schools and villages in Heilongjiang and throughout the Inner Mongolia Autonomous Region, as well as numerous universities in the region.

What are the consequences of language loss?

According to UNESCO, there are around 2,500 languages around the world—around one-third of all the world’s languages—facing extinction. Out of China’s approximately 120 minority languages, around half of them have less than 10,000 speakers, and 20 have less than 1,000. It is not just due to small population: for example, the Manchu ethnicity has a population of more than 10 million in China, but their indigenous language is spoken by only a handful of elders in Heilongjiang. With the loss of language, many traditional cultural practices, such as mosukun for the Oroqen, will also be lost. The death and disappearance of a language represents an irreplaceable loss of our understanding of human thought forever. The protection of engaged languages is the responsibility of the world, and obliges us to engage their speakers.

“Digitizing the Oroqen” is a story from our issue, “Modern Hermit”. To read the entire issue, become a subscriber and receive the full magazine. Alternatively, you can purchase the digital version from the iTunes Store.