The gate of Havana’s Chinatown protrudes above a four-lane street connecting the residential neighborhood of Central Havana to the local tourist destinations. Every day of the week, vintage American cars drive past carrying foreigners on private tours of the city, or serving as rideshares for locals on their way to work.

The cement arch is written with the characters “华人街,” marking the beginning of El Barrio Chino, Chinatown. Around it, nothing visibly suggests a neighborhood for overseas Chinese—no Chinese grocery stores, or symphony of dialect in the streets. To Havana locals and the global Chinese diaspora, this neighborhood, now home primarily to Afro-Cuban residents, is a contradiction: a Chinatown without any Chinese.

But the barrio’s winding streets are still home to a small community of Chinese Cubans who reside there, or frequent the handful of Chinese associations that are the last remaining institutions of the old Chinatown, as well as leaders in the struggle to keep the neighborhood alive—one language lesson at a time.

On a Tuesday afternoon, I walk into the Havana branch of the Min Chi Tang Association, established in 1887 as a chapter of the Hongmen secret society that originated in southern China in the 18th century. The group has since become one of Chinatown’s few remaining community organizations, including clan surname associations, and historic fraternities that provide social services and recreation to an aging population of Chinese Cubans: Lunar New Year and Qingming Festival events, mahjong games and martial arts classes, as well as apartments and meals to a demographic that receives only the equivalent of 9 USD in government assistance per month, though healthcare and housing in Cuba are free.

The Min Chi Tang is also where a group of elderly women gather once a week to learn Mandarin for the first time in their lives. Today, they peer over their glasses to copy down the characters that their instructors write on the whiteboard, then tell me about the Chinatown of their childhoods. “It was one of the liveliest neighborhoods in Havana,” says María del Carmen Li González, who has been coming to Chinatown for 58 years. “Chinatown had its own music band, beauty pageants, Carnival celebrations with lion dances.” Her mother, from Cuba, and father, an immigrant from Toisan, Guangdong, used to bring her to these activities and to traditions like attending Cantonese opera—which some of the students used to perform—and weekend family dim sum at El Pacífico, one of Chinatown’s largest Chinese restaurants. “I would always have the special fried rice with shrimp, chicken, beef and Chinese sausage…my mouth is watering just describing this.” Calle Dragones, Street of the Dragons, in Chinatown, where the Min Chi Tang Associations stands

“I won’t ever be able to have [these foods] again,” María del Carmen says, adding that today’s remaining Chinese restaurants are “different” from those in her childhood; they are usually owned by the community associations as a source of funding for their services, and cater mostly to tourists with few Chinese chefs left. The community, also, has changed: Cuba is home to fewer than 120 chinos naturales, or ethnic Chinese born in China, the youngest of whom is 72.

Officially, the Chinese have been present in Cuba for 170 years: in June, the community had celebrated the anniversary of the arrival of 206 Chinese migrant workers in 1847. Throughout the 1800s, hundreds of thousands of migrants mainly from Guangdong and Fujian provinces came to Cuba to work as “coolies,” or indentured laborers, who came to be employed in grueling and dangerous jobs on plantations, railroads, and mines around the world following the abolition of the trans-Atlantic slave trade.

These early immigrants were joined by overseas Chinese fleeing anti-immigrant legislation in the United States in the late 19th century, as well as 20th-century migrants from China during war with Japan and the Chinese civil war. At the time of the 1959 Cuban Revolution, the Chinese population was estimated at 50,000, but as Chinese-owned businesses and restaurants became nationalized following the revolution, many of their owners migrated to the US, Canada, or other Latin American nations.

Today’s Chinese Cuban community comprises those chinos naturales who stayed, as well as descendientes chinos, those with Chinese ancestry born in Cuba who are often mixed raced. As the population of chinos naturales ages and dwindles, Chinatown’s clan surname associations—those that have not closed down in recent years—have opened their activities to the latter group, who number in the thousands and are ready to connect with their heritage, even helping to lead its preservation.

Ramón Wong, the Min Chi Tang’s Chinese teacher and staff member at the Wong Clan Association, is a second-generation descendiente chino born in Havana. He had grew speaking a dialect of Guangdong province with his mother, and learned Mandarin on his own. Because he was never formally taught, and lacks experience in conversation, he speaks with an accent—he has asked me to assist him with what I learned from my own Mandarin teachers.

There’s a lot of laughter in Ramón’s weekly sessions. Because most of his students have known him since he was a young boy, they feel at ease making jokes in his class. They tell to him to slow down as he writes Chinese characters for them to copy; when one student takes too long to answer a question, another shouts out the answer for her. The group, all women over the age of 70, include many who hold leadership positions in Chinatown’s associations and aware of their importance to the neighborhood’s survival. 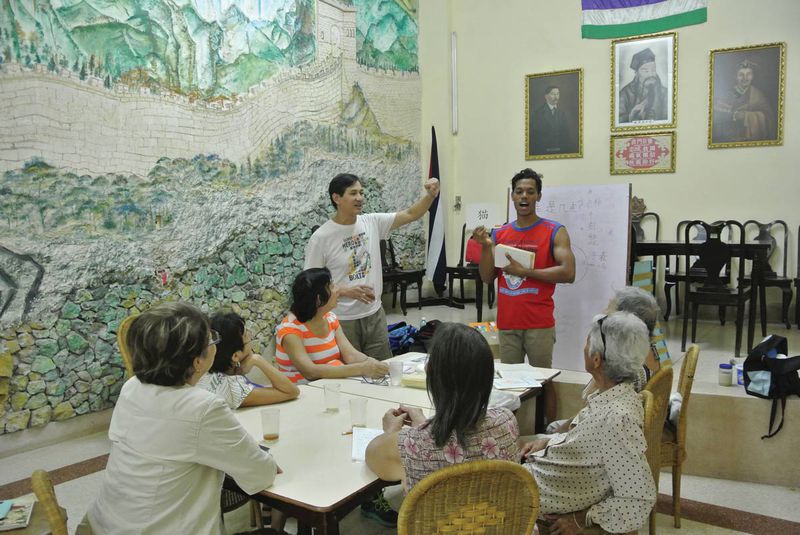 The community’s interest in language learning has been catching the eye of the government on the Chinese mainland. In 2009, the China National Office for Teaching Chinese as a Foreign Language (“Hanban”) established a Confucius Institute in Havana—coincidentally, located where El Pacífico used to be. As of 2016, there were around 1,000 students enrolled, both children and adults, taught at various levels of proficiency by teachers from the Chinese mainland.

The growing influence of the PRC also means that the Min Chi Tang Association’s classes are now only for Mandarin, though Cantonese courses used to be offered in the past by demand from seniors of the community, all of whom trace their roots to Guangdong. It’s also difficult to find a qualified teacher for Cantonese, and the dialect is quickly disappearing from Chinatown—but for now, the students will settle for more opportunity to practice conversation in any dialect, perhaps so one day they can visit China or reconnect with family still living on the mainland.

Georgina Wong, an Afro-Chinese resident, is one of those who had the chance: Trained as a Cantonese opera performer in the barrio since she was in elementary school, she went to China in the early 2000s to perform and saw her ancestral village, though she had not started studying Chinese then. It’s beyond the means for most of the community to save up for a similar journey, so each week, they make the trip to Chinatown and pore over their copied notes, a small but tight network of elderly Chinese Cubans determined to stake their own place in the diaspora.

Inspired by their persistence, I ask Georgina what motivates her to study. “因为我喜欢中国文化 (because I like Chinese culture),” she replies, proud to express herself in her beginner Mandarin skills; but it’s clear there was so much more she wanted to say.

Correction 2018-01-23: The post has been updated with corrected names of María del Carmen Li González and Yamil Fong Dinza

Chinese Lessons in Havana is a story from our issue, “Cloud Country.” To read the entire issue, become a subscriber and receive the full magazine. Alternatively, you can purchase the digital version from the App Store.