A day at Beijing’s Xin Mu Cinema, a low-key venue that provides movie screenings to the blind

The stand next to the door holds just one umbrella, amid red-and-white striped canes that look like Christmas candies. The light of the low-hanging morning sun comes rushing through the curtain-less windows; the lights are all on, yet no one complains. In spite of the brightness, the world remains in darkness for the audience at the Hong Dandan Visual Impairment Cultural Service Center’s Xinmu Cinema. 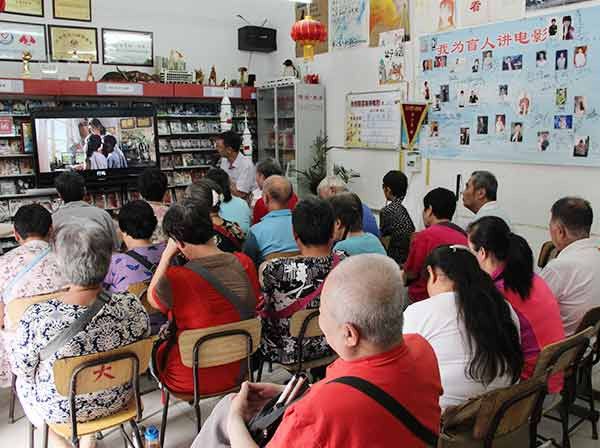 Founded in 2003, Hong Dandan is a non-profit organization that operates schools for the blind across China. Xinmu, which uses the characters for “heart” and “eye,” was a more personal project started by Hong Dandan’s founder, Wang Weili. Since it was founded in 2005, the cinema has screened movies every Saturday morning. Wang’s solution for the visually impaired is a low-tech one: A volunteer stands in front of the room and narrates the action, setting, and emotions during gaps in the dialogue.

The theater, also, doesn’t resemble the high-end auditoriums for the sighted. Xinmu is located in Beijing’s Gulou area. The colorfully decorated room—posters, hand-drawn pictures, pictures of volunteers affixed to the bulletin board—gives off the atmosphere of an elementary school or living room. The audience is mostly elderly, sitting on wooden chairs on wooden chairs arranged in rows, and a first-time visitor might assume that they are bored: Many have their heads down, eyes closed. One man with hair as gray as his coat is crouched over in his seat, head in hands, elbows on knees. He looks as if he is praying.

The sounds, though, can be as lively as any multiplex. To get a sense of Xin Mu Cinema as it’s meant to be experienced, I stop writing for a while, close my eyes and just listen. There are the badly muffled footsteps and scooting of chairs as folks file in late. Phones go off; whispers rise and fall; bags are opened and shifted around. There isn’t a concession stand, but there is free tea on the table, and the man in the black bowler hat makes a sound like dry shuffling leaves as he reaches into a bag for his bottle. A woman fiddling around with the collapsed parts of her cane makes a loud clacking, like horses’ hooves. 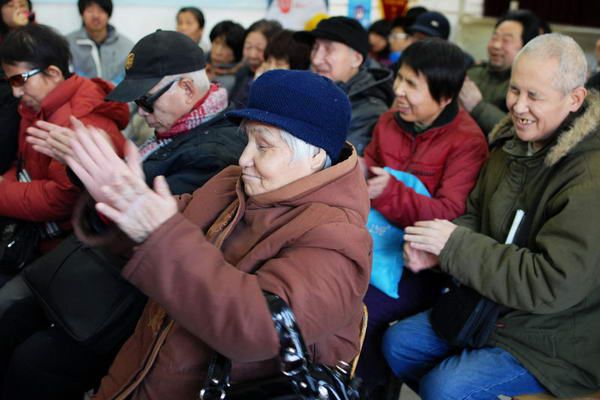 Though elderly, they look like schoolchildren seated in rows at the theater. (photos.caijing.com.cn)

Today’s narrator is a middle-aged woman. But perhaps unconsciously, she also narrates her own experiences as a viewer while describing the film. We hear her say “wow” when she is surprised, huff when she thinks something is funny; she asks questions about parts of the film that confuse her.

Some of the details she described must seem strange. What, I wonder, does a “red” dress look like to those in the audience who were born blind? At times, the narrator’s insertion of her own interpretations reminds me of government film lectures out in the Chinese countryside during Maoist times, though our “lecturer” acknowledges some subjectivity.

“She wears the particular smile of a 22-year-old woman,” our narrator describes. “It’s beautiful. I think that this is the most beautiful scene between people.”

I am starting to get it. I feel it. The images are not irrelevant, but they give me a different experience of this story than I have sitting here, head down staring into my lap. I feel more connected to the film. It’s more personal. I am not just seeing the action but looking at them on many levels through our narrator, and having her connect the signs on the screen—which a sighted person might take for granted—to the mixture of sensory cues, metaphors, and personal experiences that help the visually impaired make sense of the world. 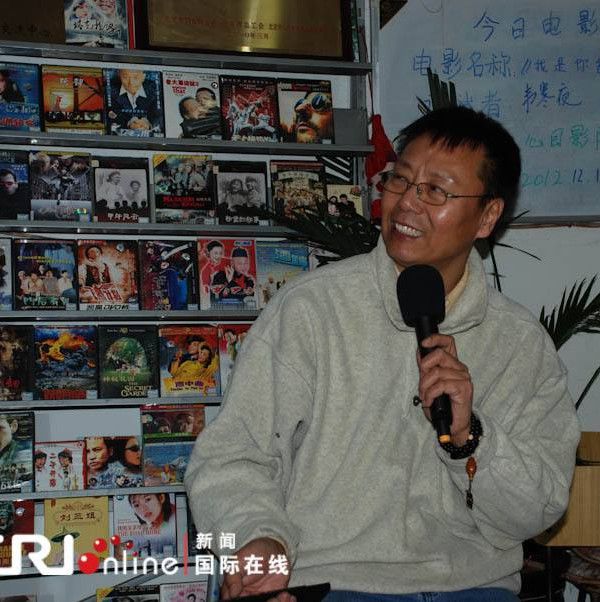 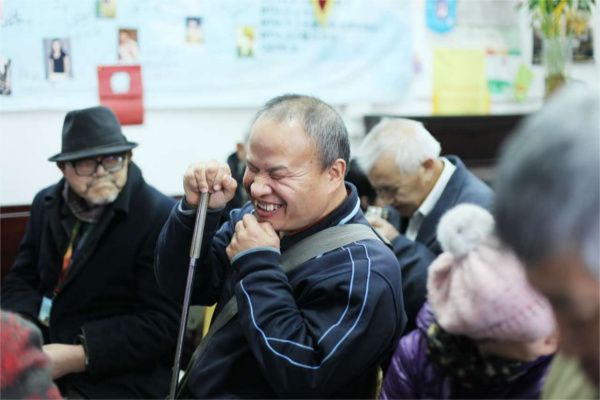 The visually-impaired in the audience see the films through their mental eye. (news.ifeng.com)

The narrator reads out the first few names as the credits roll, and the audience claps. “I hope everyone finds courage through this film,” she concludes. “I think that the most important feeling that this film gives us is that to love yourself is to love the world.”

For only a moment, all sounds are suspended in silence before people start milling about and making other plans with one another—“Are there any more activities today?” “Have you eaten yet?”—as the volunteers help everyone to their exit. 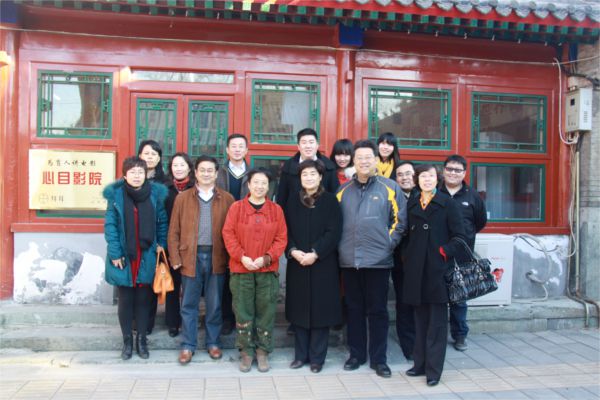 Many groups come only to see the theater, not the film. (bjyouth.gov.cn)

A day at the movies, after all, is more than just the spectacle. It’s a social affair. As I’m leaving Zheng Xiaojie, Wang’s wife and co-founder of Hong Dandan, appears from out of the gate of the center’s small courtyard. We talk about new technology that’s being developed to help visually-impaired people to hear audio-descriptions in theaters and through apps, and I ask if they will affect her cinema, where they’ve already been introduced.

Corrections: An earlier version of the story misrepresented the location of the cinema and incorrectly stated that they had not yet started using audio-description technology, when in fact it is already available