It is hard to imagine that the US and Russia—along with Japan, Britain, France, Germany, Italy, and Austria-Hungary—were, at one point in the 20th century, politically and militarily aligned. In 1900, however, these states came together as the “Eight Nation Alliance” and marched on Peking (as it was then known) to rescue the diplomats inside the Foreign Legation Quarter during the infamous Boxer Rebellion.

The history of the Boxer Rebellion is complicated: It was both an international conflict and a deep struggle for political power within the ailing Qing dynasty. The common narrative is that an anti-foreign peasant rebellion that began in 1899 gained semi-official support from Empress Dowager Cixi, who wanted to hold onto power against the pro-reform factions within the Qing court. When the rebels marched on the city’s Legation Quarter, where the foreign embassies were located, the eight powers amassed 20,000 troops to storm the walls of the capital.

While scholars debate the motivations of the main actors of the conflict, there is little doubt as to the end result of the Boxer Rebellion: It hastened the fall of the Qing dynasty, which was fully ousted just a dozen years later, giving way to the Republic of China in 1912.

Today marks the 118th anniversary of the start of the siege by rebels (Cixi’s own declaration of war came a day later, on June 21). While Beijing has utterly transformed since 1900, there are still many sites throughout the city where the legacy of the rebellion can be witnessed.

Following the defeat of the Boxers, the Qing government had to pay massive reparations (totaling 333 million USD) to the Eight Nation Alliance. The US government, under President Theodore Roosevelt, decided to use some of these reparations to fund educational programs for Chinese students. While much of this funding was used to provide opportunities for Chinese overseas, on April 11, 1911, a preparatory college was founded in Beijing to prepare these study abroad students. This college eventually became Tsinghua University, China’s second-leading academic institution after Beida. 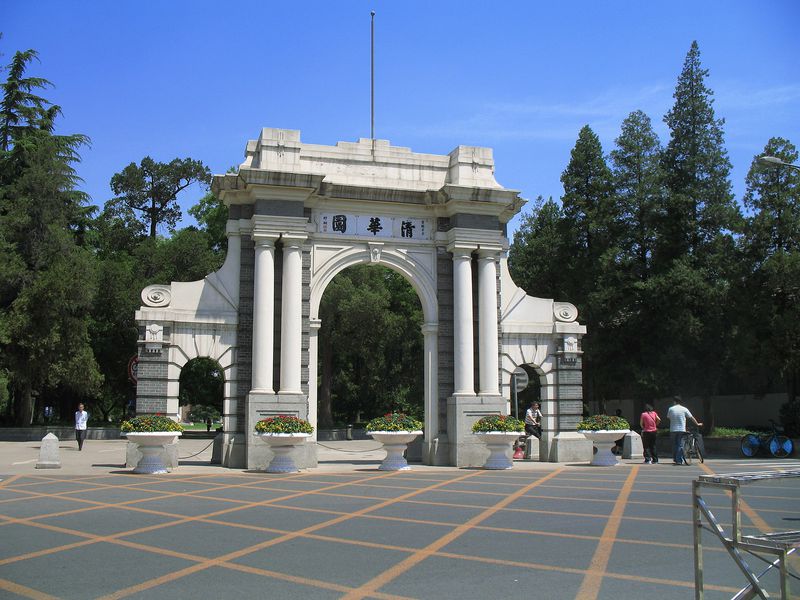 The Southeast Corner Tower is one of the last remaining sections of Beijing’s Old City Wall. Today, the tower can be visited as part of the Beijing Ming City Wall Relics Park. There is a museum about the wall at the top, and, according to Atlas Obscura, graffiti in both English and Russian from the invasion. One of the most striking illustrations of the Boxer Rebellion is “I’ll try, sir!” which shows US marines (deployed from the recently-acquired American colony of the Philippines) storming the tower. 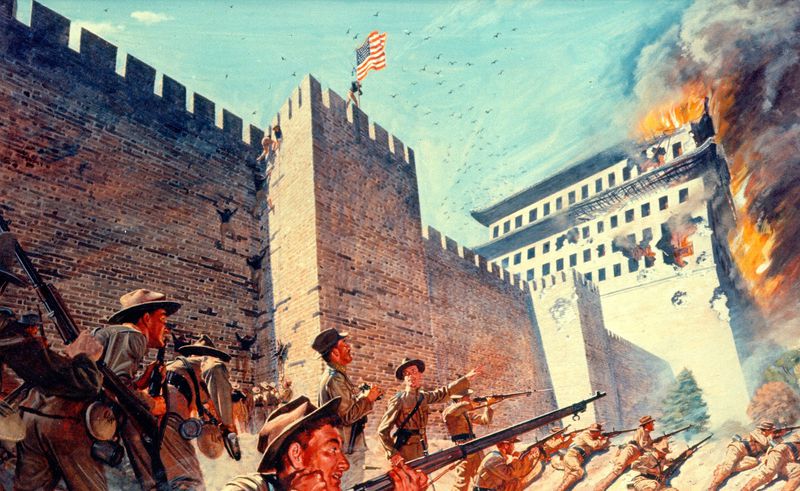 “I’ll try, sir!” a rather fanciful depiction of warfare at the Southeast Corner Tower (Wikipedia Commons)

Some of the most recognizable symbols of foreign influence in China—Christian churches—were targeted by the Boxers. Two of Beijing’s Catholic cathedrals have unique stories from this time period. St. Joseph’s Cathedral at Wangfujing (also known as Dong Tang, or East Cathedral), which had a history dating back to 1653, was burned to the ground during the Boxer Rebellion. It was rebuilt in 1904 in the Romanesque style. The Church of the Savior at Xisi (also known as Bei Tang, or North Cathedral) survived the siege with nearly 4,000 people, mostly Chinese Christians, taking refuge inside. Those who survived described the event as a miracle, as the church was protected by only some 40 French marines, and they were able to survive on existing food stores for nearly two months. 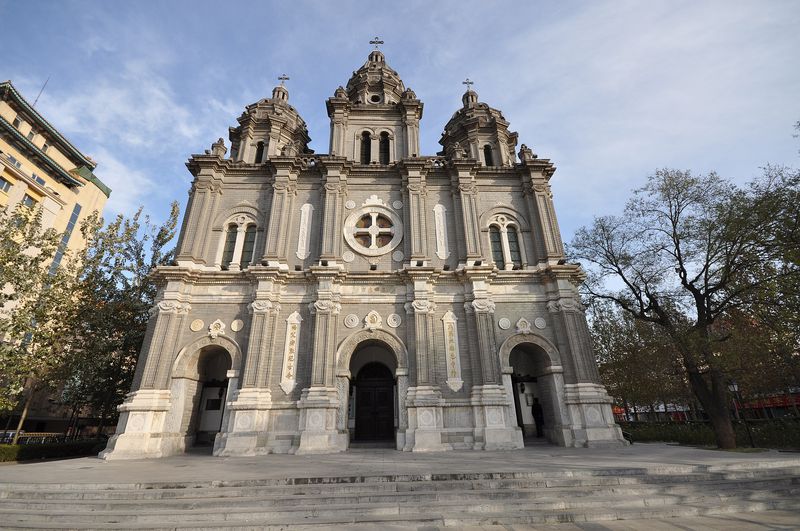 Today, the Foreign Legation Quarter, or Dong Jiao Min Xiang (东交民巷), is prime real estate, located just southeast of the Forbidden City. While most of the original structures besieged cannot be entered, as they are now being used by different organizations, it is still a beautiful area to walk and view the uniquely western architecture. Additionally, you can visit the Beijing Police Museum (the former building for the First National City Bank of New York), often described as one of the more interesting museums in the city, and pay a visit to the nearby Qianmen 23, a compound that has housed some of the city’s best foreign restaurants, including the now-defunct Maison Boulud, and now plays home to the Blue Note club and Johnny Walker House. 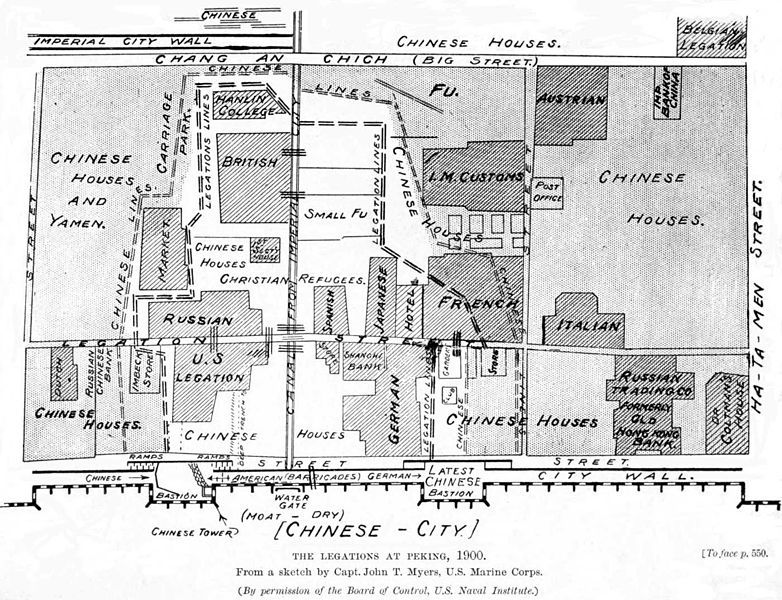 The Legation Quarter in 1900 (Wikipedia Commons) 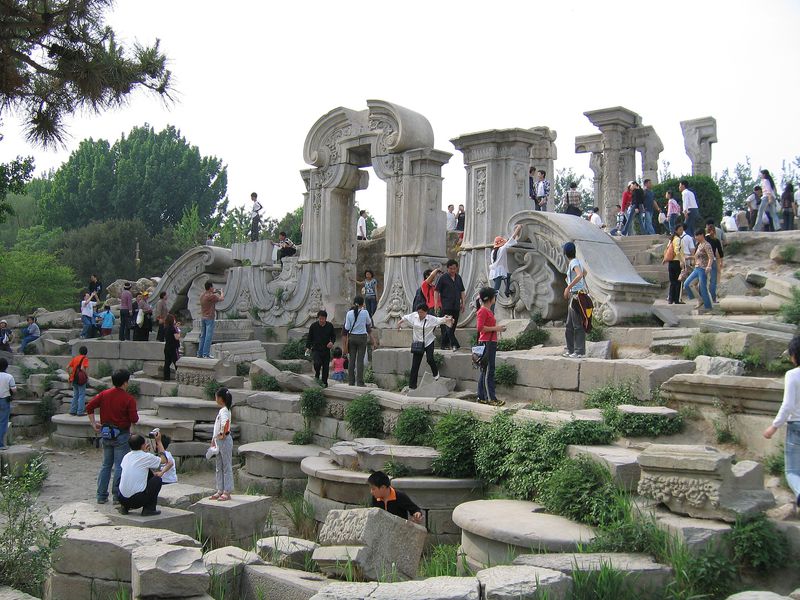