“You really suck; you don’t even have to act”—with these words, famous TV host Cui Yongyuan appeared to open fire on starlet Fan Bingbing

“You really suck; you don’t even have to act.”

With these words, famous TV host Cui Yongyuan—star of Tell It Like It Is—stayed true to the title of his own show, and delivered a huge blow to Hollywood starlet Fan Bingbing, and others in the film industry he considered to be “rogue.”

Cui began a “bombarding Fan Bingbing” hashtag with a series of screenshots on Weibo that purported to show how the A-list actress dodged vast amounts in back taxes by double bookkeeping. The employment contracts showed that Fan made a net 10 million RMB for one movie, while “Party A” also had to pay for her makeup artists, Mercedes-Benz cars, and 20 million RMB in insurance. 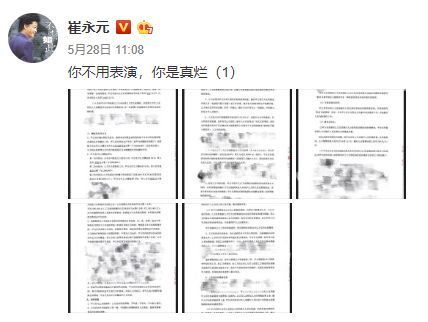 Fan’s studio quickly responded, claiming that Cui and any netizens who reposted the contracts were libeling the star, though no names appeared on any of the posts; furthermore, they alleged Cui “broke business rules” by posting classified documents. On Sunday, the State Administration of Taxation responded to the incident, ordering local tax bureaus to act on all yin-yang he tong (阴阳合同, yin-yang contracts), a common term for a scam involving two different versions of a contract for internal and external use, which netizens are accusing Fan of having signed.

The Wuxi Binhu taxation bureau, the jurisdiction where Fan’s film studio is registered, has identified Fan as the subject of a investigation into the accusations.

Although not known for showing sympathy for errant celebrities, netizens had mixed feelings about the controversy, though many commentators supported Cui, saying that “it is a country’s woe if actors are paid more than scientists,” and telling him to be careful, since Fan could be a “dangerous and powerful enemy.”

However, other suspect a personal axe to grind, suggesting that Cui is attacking Fan because he believes that the lead role in one of Fan’s movie, the lacklustre Cell Phone, is an allusion to himself. After the start of shooting of Cell Phone 2, Cui had deemed director Feng Xiaogang, writer Liu Zhenyun, and actress Xu Fan as enemies.

The online drama also spread to the stock market, causing film and television stocks to hit their daily downside limits. Oddly, Cui commented on this issue this morning in the voice of his cat, Anna: “I am so sorry, my human did not mean to [post that], he doesn’t understand the stock market at all.”

He has also sent mixed messages elsewhere. On Sunday, Cui told China National Radio that he was “waiting for the tax bureau, so that I can provide information and documents.” However, according to an article published by Huo Xing Shi Yan Shi (火星实验室, SparkleLive), a media account under Bo Ya, Cui had actually apologized to Fan on Sunday evening. In a partial recording of the interview published, Cui said: “I apologize to Fan Bingbing, Xu Fan, and Liu Zhenyun’s daughter using your platform. I feel really sorry for hurting these many people.”

Cui also expressed his respect for actresses like Fan, saying that it’s very hard for ordinary girls like her to get to high positions and be accepted by audiences. He added to SparkleLive that the contract situation is more complicated than it looks, and promised to tell the public more once things get clearer.

In a later interview with youhaoxifilm (我们有好戏), Cui said the target of his ire is actually writer Liu Zhenyun: “I wonder why it suddenly became a drama between me and Fan… I don’t even want to target [director] Feng [Xiaogang] anymore, his qualities are so terrible that he’s not even worth it. My only target now is Liu. I just want to figure out how an intellectual could turn into a rogue…Neither said anything, and Fan did, so she became the one who took all the bullets.”

However, Cui affirmed that all the evidence was real, and added that, as a journalist, he was responsible for his words. Some netizens have called him a “national hero” for standing up to the rich and corrupt. “It’s all bullshit, I never wanted to be any hero,” Cui said. “If you arrest Feng and Liu right now, I will quit [make these accusations] immediately.”