The game, which can be roughly translated as “Guess-and-Draw Little Song,” allows players to team up with AI partners to draw an assigned objective, which the AI will try to guess. If the AI manages to correctly identify the item, the player can move to the next round. Yes, it’s Pictionary in your pocket. 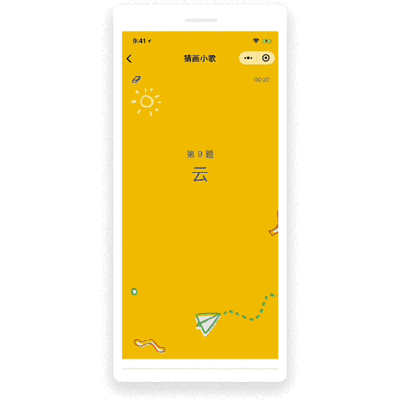 The game, which can be found on Tencent’s WeChat mini-gaming platform from Wednesday, is an improvement on the 2016 AI-powered Quick Draw, and pictures are circulating on Moments, which might cheer those at Google hoping to have another crack at the Chinese market. Earlier this year, Google announced they would invest over half a billion dollars in Chinese e-commerce platform JD; through the partnership, Google could sell its smart speakers and other hardware.

On July 1st, the flagship store of the British Museum opened on Taobao, offering stationary, clothing, and some simple household supplies, rather than the precious relics, plundered from foreign lands, that some might like to purchase back. The Palace Museum (aka Forbidden City) led the online shopping charge, although like most Chinese museum, it charges for entrance. Publicly owned British musuems are free to enter, and raise revenue through commercial means. At the Global Netrepreneur Conference in 2017, Roderick Buchanan, Director of Business at the British Museum, said the museum is also struggling to maintain its budget after recent government cuts following the financial crisis of 2008. The popularity of the museum’s Taobao store suggests that more foreign museum stores will opened in future.

Last Friday, sanctions on Chinese telecommunications maker ZTE were lifted by the US Department of Commerce. ZTE’s Weibo account made an announcement that they would “Start out with full confidence!” issuing a set of posters with the words “Set out,” “Shall not fear,” “Re-lighten,” and “Gratitude.” They should certainly be grateful for Trump’s volte face: The company reported an estimated loss of 7-9 billion RMB in the first half of 2018, a 405-492 percent drop from last year, in which the 1 billion USD penalty no doubt played a role, along with its normal operations completely interrupted by the sudden ban.

According to the latest reports, three of the biggest telecom operators in China, China Mobile, China Unicom and China Telecom, though, have just placed orders of telecoms equipment worth more than 500 million this Monday and Tuesday, a collective move to help the troubled telecoms company back on its feet. ZTE stock saw a  40 percent raise since the ban was lifted, and ZTE is also expected to play a major role in the impending 5G coverage upgrade.

On July 16, Beijing netizen “Tomato” shared their experience of taking a Huolala van (货拉拉, “cargo picking up”, a cargo-only delivery app) to “deliver” himself to the office. It turned out he is not the only one—many Beijingers had the same idea, after heavy rains, new regulations and a migrant work shortage coincided to make hailing cabs on the street or on app virtually impossible.

Safety concerns have been aroused, however, as the vans are not qualified to be used as passenger cars. Beijing Youth Daily has learned that Huolala actually forbids drivers to take passengers, and will revoke the driver’s registration on the platform for any violation—but the platform can only detect the violation from customers’ complaints. A loophole that few will attempt to close, as, with the official implementation of the Rules on Illegal Passenger Carrying in Beijing in force July 1, it will soon be as difficult for Beijing residents to hail a cab (especially on rainy days) as it was back in the days before ride-sharing apps came along to solve the problem…of not being able to get a cab. Great work, guys!

A Chinese genomics company has seen its share price plunge, after a client’s baby was born sick, suggesting its test results may be fraudulent