Confucius clasps his hands in greeting, his face weathered by 2,000 years of erosion. Unlike the full-figured statues that salute passersby in public parks all over China, the oldest known portrait of the philosopher depicts him as he might have looked in real life—hair in a sensible bun, beard shaved to a point, perhaps a little thin and starved from life on the road.

This lacquer portrait of Confucius, painted on the cover of a bronze mirror dated to the first century BCE, is just one of innumerable treasures still being unearthed from the Tomb of the Marquis of Haihun (海昏侯) in Jiangxi province, which opened to visitors in late September. The largest and most well-preserved Western Han dynasty (206 BCE – 8 CE) tomb discovered to date, it has been hailed by experts in China and abroad as one of the most significant archeological findings of the century.

Certainly, local authorities do their best to advertise it as such: Driving out to the tomb on the newly constructed highway out of Nanchang, one sees banners that proclaim, “There are terracotta warriors in the North; there is the Tomb of the Marquis of Haihun in the South.”

This bombastic claim might be true from an archeological standpoint, but while the emperor Qin Shi Huang was a revered (if also feared) ruler who is credited with uniting China, the owner of the Jiangxi tomb, the “deposed emperor” Liu He (刘贺), was a well-known wastrel who had all but faded into history after his strange 27-day stint on the throne: not even his regnant name is listed in the official dynastic record, the Book of Han (《汉书》).

Born in 93 BCE, Liu He was the grandson of the renowned Emperor Wu of the Han and his concubine Lady Li. His father, Liu Bo (刘髆), ruled the principality of Changyi (昌邑) in today’s Shandong province. At age 5, Liu He became the Prince of Changyi at the death of his father, and when his uncle, Emperor Zhao, died childless in 74 BCE, Minister Huo Guang (霍光) summoned the 19-year-old prince to direct the funerary rites and succeed to the throne.

According to the Book of Han, when the young prince received news of his good fortune, he “set off from Changyi at noon, and traveled 135 li by sunset; many of his horses died from exhaustion.” Arriving in the gates of the capital, Chang’an, he claimed to have a sore throat and could not cry for his uncle. In the next 27 days, the records claimed that the new emperor performed “1,127 immoral acts,” an average of 43 per day.

Though these violations sound quite tame to modern ears—he simply ate meat, drank alcohol, and visited his concubines while in mourning for his uncle, and filled many imperial posts with old cronies from Changyi—Minister Huo used the authority of the Dowager Empress to strip Liu He of his title, massacre the 200 ministers he brought from Changyi, and sent him back home (where, the dynastic records say, Liu continued his debauchery undisturbed). 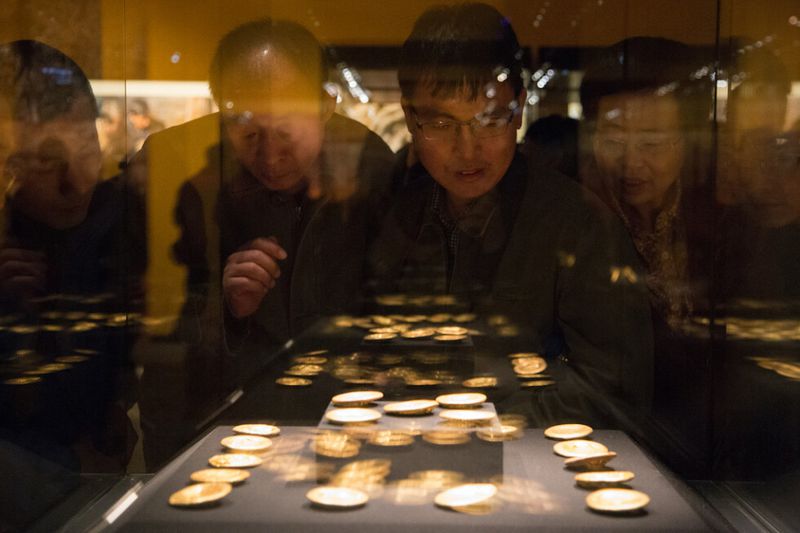 In 63 BCE, Liu He’s cousin and successor Emperor Xuan made him Marquis of Haihun, an obscure corner of the empire south of the Yangtze River. The emperor claimed he wanted to extend an olive branch to a blood relative, though less charitable historians believe he simply wanted to remove Liu He from his old base of power in Changyi. Liu He lived out his final years in Haihun, dying at the age of 33 possibly due to food poisoning from the watermelon seeds found in his coffin. He was buried outside of his capital city, along with his wife, concubines, and sons.

In the spring of 2011, rumors of a solid gold dragon statuette—an object that could only have belonged to an emperor—coming up for sale in the antique markets of Nanchang led police to bust a tomb-robbing gang that had set up camp on a distant shore of Poyang Lake, 40 kilometers outside of Nanchang city. Five years of excavation in the area found numerous imperial seals and bamboo slips that confirmed the tomb as Liu He’s.

Among the most fabulous findings in the Marquis’s tomb are 438 objects of almost solid gold, the largest number found in any Han dynasty tomb, fashioned into round and hoof-shaped coined, and even sheets lining Liu He’s coffin. According to Han custom, imperial princes brought tributes of gold to Chang’an every year as part of worship rites for their ancestors. But Emperor Xuan, paranoid that some ministers in the capital remained loyal to his cousin, forbade Liu He from participating in the ceremonies, so all the ex-emperor’s riches remained with him in Haihun.

A discovery of no less value was the long lost “Qi version” of the Analects of Confucius (《论语》), among over 5,200 wood and bamboo slips that contain valuable knowledge on the court customs of the Han period, the most complete version yet discovered of the Classic of Songs (《诗经》), and a unique version of the Annals of the Spring and Autumn Period (《春秋》).

Other slips filled in gaps in historians’ knowledge of Liu He’s life after leaving the capital: Liu and his wife apparently kept up a correspondence with Emperor Xuan, humbly requesting permission to come and tithe gold in the capital, and pay respects to the emperor and his mother. A chessboard found in the tomb, exquisite bianzhong chimes, and other musical instruments confirmed the Marquis as a man of varied interests.

In Liu’s son’s tomb, on the other hand, toys such as a bronze tiger on wheels gave clues to everyday life in the Han period, while the gold objects, over 10 tons of copper coins, and a necklace of agate stones are evidence of the might of the Han empire and the Silk Road at their heights. A burial pit full of magnificent four-steed chariots and the skeletons of horses—the only pit with live horse burials to be found south of the Yangtze—attested to the riches of Haihun itself, a region of China usually overlooked by history. 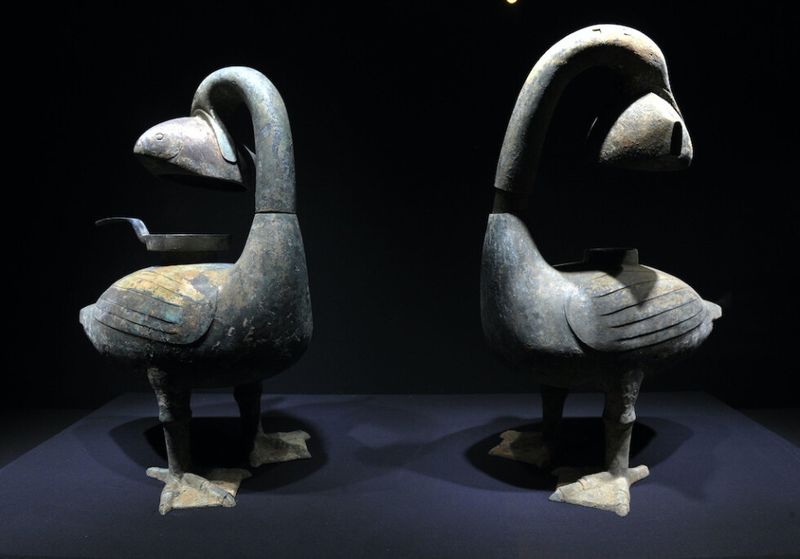 And of the tomb owner? As early as the 11th century, historian Sima Guang (司马光), in his Comprehensive Mirror to Aid in Government (《资治通鉴》), opined that Liu He was probably not as immoral as history made him out to be—that the Book of Han was likely to be biased in favor of Emperor Xuan, and Liu’s only real crime was appointing his advisers from Changyi to government posts, which threatened Minister Huo and his faction.

The contents of the tomb seem to confirm Sima Guang’s suspicions, showing Liu He to have been well-read and interested the “six arts” of the Confucian gentleman, including rites, music, chess, and charioteering. Historians, too, are indebted to Liu for the strange twists of fate that gave him a burial site fit for an emperor, and the anonymity to preserve it for over 2,000 years.

At the moment, visitors walking through the burial mounds behind the museum at the Tomb of the Marquis of Haihun see a large warehouse standing over the resting places of Liu He and his wife, where researchers are still at work away from the public’s prying gaze. The nearby ruins of Liu’s capital, Zijing city, are also farmland still waiting for the archeologist’s tools.

In a few years, museum authorities say, Liu He’s tomb might be open to the public, and tourists will be able to look down into the impressive pit of chariots, statues of soldiers, and protective moats (also supposedly designed by Liu himself) as they do with Qin Shi Huang’s terracotta warriors. Until then, it’s enough to admire the deposed emperor’s golden trove, ponder what other historical mysteries his tomb might reveal, and wonder if, somewhere, he is having the last laugh.