Lake of the Lost

Lake of the Lost

Beside a road snaking over the northeastern shore of Poyang Lake (鄱阳湖), 33 skeletal wind turbines tower over China’s “Bermuda Triangle.” The largest wind farm in the province, which has generated over 700 million kilowatts of renewable energy in the impoverished region since 2011, is an oddly triumphant sight for a spot known to be cursed.

“In just one hour, we can make what other wind farms generate in one year,” Zhang Yuanxing, a retired fisherman, shouts over sporadic gusts reaching over 50 kilometers per hour.

Officially, the wind is also the culprit behind the consistently strange disappearance of ships on the nearby channel, called the Laoye (“Lord”) Temple waters after the 18th-century shrine on its shore. Lying at 32.48 degrees north of the equator, these waters share the same latitude as the Atlantic Bermuda Triangle. Conservative estimates put the number of shipwrecks in this channel at over 100 in the last 60 years alone, while higher figures claim more than 1,000 over the last century. Neither can be verified due to poor record-keeping, and the tendency of mariners to enhance their yarns in the telling. 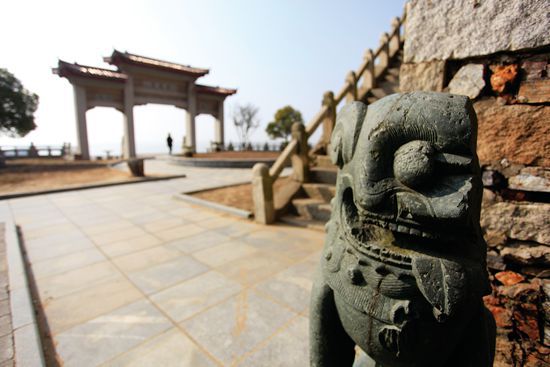 What is generally agreed, though, is that on August 13, 1985, a whopping total of 14 ships sank in a single day. More recently, the sinking of a sand barge was witnessed by area fishermen in 2001, who described to state broadcaster CCTV a gale that whipped up from nowhere and sent the boat spinning in circles, minutes before it was sucked below. Moreover, for most of these six decades, no wreckages from these lost vessels have been salvaged from the lake’s bottom.

These waters are no stranger to legend. In 1363, rival warlords Chen Youliang and Zhu Yuanzhang faced off at the Battle of Lake Poyang, allegedly the largest naval clash in history. After both sides’ fleets were destroyed, Zhu—now better known as the Hongwu Emperor, the eventual founder of the Ming dynasty (1368 – 1644)—found that he had no way of retreating to the other side of the lake. At this critical moment, a giant turtle appeared and carried the future emperor safely across. Some time in the early Qing dynasty (1616 – 1911), a temple was built on this shore in honor of the “Dragon King,” which later became the Laoye Temple.

Today, the temple is still a popular destination for pilgrims from nearby villages and towns, who come to pray away a cornucopia of problems from stomach pain to their children’s poor grades. Local fishermen, too, take a few days off during China’s “Golden Week” vacation each year, and moor their boats below the temple to serve as makeshift cruise ships. Tourists sign up gamely, in spite of the ominous stone slabs that proclaim the area as the “Bermuda of the Orient” in red paint, erected on the shore by the local tourism bureau in 2014.

“Sure, I’ve seen shipwrecks,” says Zhang conversationally, even as the boatloads of tourists below us pull away from shore, joining dozens of vessels of all sizes that are busy on the lake on this day. “Forty or fifty years ago, when I was growing up, we often saw boats go down in storms, and a dozen crew members would die.” As the only passage between China’s largest freshwater lake and the Yangtze River, the channel at Laoye Temple has been an important shipping route since ancient times, most recently serving Poyang Lake’s bustling (if mostly illegal) sand-extraction industry. 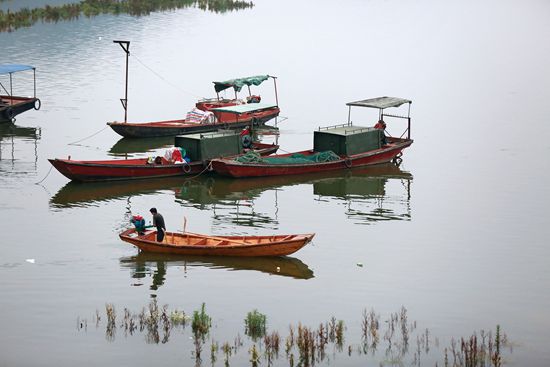 According to the most famous modern tale about the lake, it was also while attempting to ship contraband through this channel—in this case, 1 billion USD’s worth of stolen Chinese gems—that a Japanese military cruiser called the Kobe Maru disappeared off Laoye Temple in 1945. So patriotic were these waters, that they not only swallowed the ship and all its hands, but also the Japanese divers sent to salvage the wreck, along with the members of an independent underwater excavation team led by an American named Edward Boer (or Bolton) the following year. Boer alone survived to publish the tale 40 years later in the “United Nations Environmental News,” still apparently haunted by the “white underwater light” that devoured the rest of his crew.

The chilling tale is repeated across various news and paranormal sites, although neither Boer nor the UN Environmental News seems to be otherwise traceable. Some skeptics have suggested that the legend of the downed Kobe Maru may have been confused with resembling tales: that of Edward “Teddy” Bolton Tucker, an American diver famous for recovering lost wrecks around the actual Bermuda Triangle, who died on Somerset Island in 2014; a ship called Awa Maru, carrying Chinese gold and jewelry (and, some say, the lost skull of the Peking Man), that was torpedoed by American forces off the coast of Fujian province in 1945.

In 2011, the editors of the Jiangxi News received a phone call from a distraught Nanchang writer named Xiong Jianhua, who confessed that both the Japanese treasure ship and the American diver were fictional creations from his novella “The Hair-Raising Chinese Bermuda—Report from the Lake Poyang ‘Devil’s Triangle’,” published 20 years ago in Spring Soil literary magazine. Xiong claimed that he’d drawn from existing local lore, and cited fictional news “reports” in his story for added verisimilitude (a Tachibana Maru, built in Kobe, had been torpedoed on Poyang in 1938). He stressed, though, that he never imagined that the story would become such a sensation, nor so widely believed. 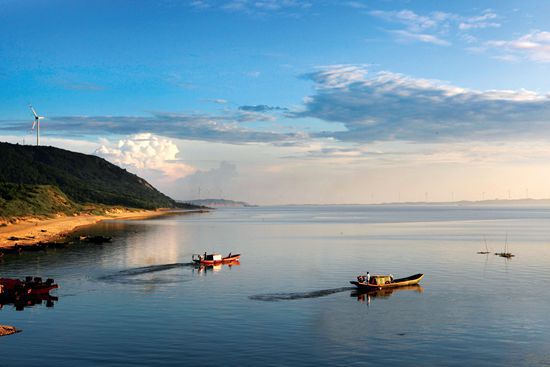 On a usual day, Poyang Lake is busy with fishing boats, container ships, and industry

Meanwhile, scientists have been doing their part to (literally) take the wind out of the legend’s sails. Researchers at the nearby Duchang County Meteorological Institute blame geography for the area’s peculiarities. Speaking on an episode of CCTV’s Approaching Science program, they claimed that the narrowness of the channel at Laoye Temple—a mere three kilometers across—creates a tunnel for the winds that rushes down from the slopes of the Lushan Mountains, Jiangxi’s most famous peaks. Before the gusts can exit the channel, though, they run up against more mountains to the south of the temple, and must double back over the “Devil’s Triangle.”

Due to this topsy-turvy weather pattern, neither the direction nor the speed of the wind can be predicted ahead of time. The shallow lake bed, just 18 kilometers deep in some places, also makes for muddy waters with almost zero diving visibility, which, combined with a lack of government action or advanced equipment, had thwarted most efforts to look for shipwrecks in the past. Still, since 2011, several fishing boats have been salvaged from the bottom using metal-detecting and electromagnetic equipment (the latter, incidentally, also disproved previous theories about “irregular electromagnetic fields” causing ship disappearances.)

So much, seemingly, for the mystery. Do the waters still hold any secrets—or is mystery-hunting doomed to be anticlimactic, as each new clue or explanation inevitably chips away at the mystique? The fishermen believe the former. “The people born and raised here have always known it’s just the wind,” admits another fisherman, also surnamed Zhang, grinning. Nevertheless, he adds, “We will always have faith.”

According to this second Zhang, it’s still the custom for sailors to set off firecrackers as they pass the channel, whether aboard the biggest container vessels or the smallest fishing dinghy. Even on the skeleton of the Duchang-Jiujiang Highway bridge, currently under construction over the channel, workers routinely kowtow and set off firecrackers to ensure blessing from the gods. “Any society needs faith; it’s the soul of our civilization,” says Zhang. “Some people are Christians or Buddhists; we pray to our Laoye Temple and [believe] it’s the best in China.”

“You might not want to publish the truth; people wouldn’t like getting the story spoiled,” fisherman Zhang’s wife, Ms. Guo, whispers conspiratorially as she tows their boat back to shore. Yet the Laoye Temple was perhaps unique enough, even without lost treasure, extraterrestrials, or other occult embellishments. As I turn to leave, a southeasterly squall thunders down the shore, flattening the long grasses and taking several tourists’ hats as spoils. By the time I turn around, the wind has already died as suddenly as it had come; the lake is as smooth as a mirror.

Lake of the Lost is a story from our issue, “Curiosities and Quests.” To read the entire issue, become a subscriber and receive the full magazine. Alternatively, you can purchase the digital version from the App Store.