“There is a beauty in the North, matchless and unmatched; one glance from her felled a city, another glance felled a kingdom” goes “The Beauty Song,” a famous Han dynasty (206 BCE – 220 CE) ballad composed by court musician Li Yannian in the second century BCE.

Li, though, seemed to have gotten his location wrong. It was in China’s remote west that, in 1900, the ruins of a kingdom were discovered by Swedish explorer Sven Hedin in the desert—complete with Han-era artifacts, all the signs of a sudden collapse, and even a famous “beauty.”

As Hedin writes in his memoir, My Life as an Explorer, the discovery was a total accident. Since the 19th century, explorers had been traveling to present-day Xinjiang, in search of an immense former salt lake described in Chinese historical records, and a lakeside Silk Road trading post called Loulan (楼兰). When Hedin’s Uyghur guide, Oerdek, loses his way while searching for a shovel, he stumbles upon evidence of buried dwellings and a former stupa (Buddhist shrine). “No explorer had an inkling, hitherto, of the existence of this ancient city,” Hedin recalled. “Here I stand, like the prince in the enchanted wood, having wakened to new life of the city which has slumbered for a thousand years.” 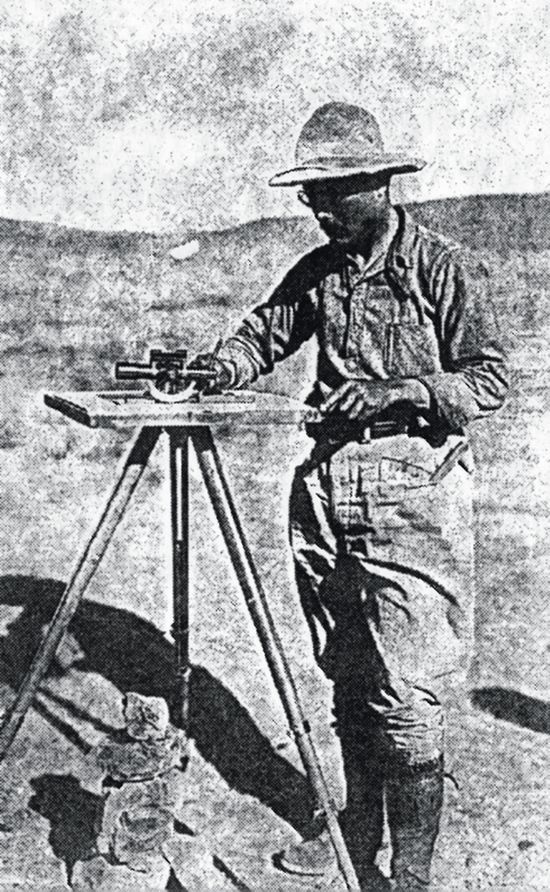 Hedin surveying the terrain in the Taklamakan Desert

After a second excavation in 1901, Hedin announced his discovery to the world as the lost Loulan, a kingdom first mentioned in the Han Records of the Grand Historian. Known as Kröran, or Kroraina, in the Kharosthi script of this region, Loulan was described as one of the states conquered by the Han’s arch-nemesis, the Xiongnu, in 126 BCE. It wasn’t long before the central empire decided to seize the oasis kingdom for themselves: Loulan had a prime location at the junction of the Silk Road’s northern and southern routes, and a third road that led straight to the Han capital at Chang’an.

For the next 30 years, the Han and Xiongnu struggled over control of Loulan, before it finally became a vassal state of the former, known as the Shanshan, though it retained de facto independence for most of the century afterwards. According to the Book of Han, the kingdom was located in an oasis by the lake, Lop Nor (“Vast Lake”), and “produces jade, with an abundance of reeds, rose willow, poplars, and white grass. Residents raise livestock and forage aquatic plants. There are donkeys, horses, and many camels.” These Arcadian visions came to an end in the sixth century CE, when Loulan totally vanished from the record. Buddhist pilgrim Xuanzang, returning from India via this region in 644, saw only an eerie ruin: “A fortress exists, but not a trace of Man.” 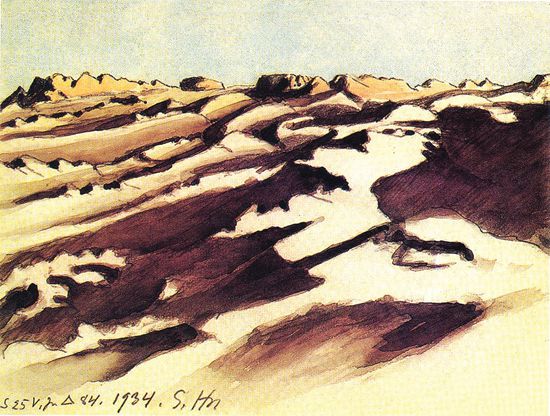 A 1934 watercolor of the Lop Nor’s desert terrain, by Hedin

Such are the bare facts of the story. Almost nothing is known, though, about the actual people who inhabited this kingdom, where they came from, and why they vanished so quickly and utterly.

Loulan is as desolate today as when Xuanzang found its remains. Visitors are not allowed at the ruins; researchers who obtain special permission to go must drive 250 kilometers from Ruoqiang, the nearest county seat, to Lop Nor, and then go off-road into total desert. In modern times, the lonely location has become the setting of many uncanny tales. China used to test nuclear weapons at the spot, and the basin perfectly resembles a human ear in satellite images. The area has also become notorious for strange disappearances: It is the last known location of, among other things: two buses; an aircraft that vanished en route from Chongqing to Urumqi in 1949 (it was discovered, nearly a decade later, almost 180 degrees off its charted course); a PLA officer, whose remains were eventually found 100 kilometers away; and Peng Jiamu, a senior Chinese Academy of Sciences researcher who went looking for water during an expedition in 1980 and was never seen again.

The desert has slowly given up some of its secrets over the years, though often these clues raise more questions than they answer. Hedin, like his colleague and successor Aurel Stein, reported coming across the occasional desiccated body in the dunes during his visits. Over 200 of these so-called “Tarim mummies” have since been unearthed, dating from the Bronze Age to 200 BCE. The oldest, nicknamed the “Beauty of Loulan,” was discovered by a team of Xinjiang archaeologists in 1979, and is believed to have been a woman in her 40s who lived sometime around 1800 BCE. 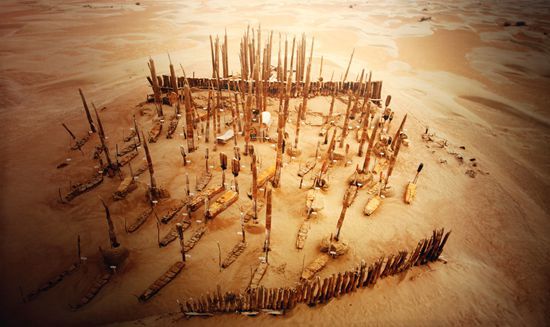 The Xiaohe Cemetery, where the “Beauty of Loulan”and 91 other mummies were found

Astonishingly, this beauty and many of her fellows bore typically Caucasian features—deeply-set eyes, chiseled faces, tall noses, and hair that ranged from blond to red to russet, their colors impeccably preserved by the sand. This accords with a legend in the Book of Jin, which stated that, in 326, the king of Shanshan ended a war against Zhang Jun, the warlord of Dunhuang, by offering Zhang a golden-haired, blue-eyed “Loulan beauty.” 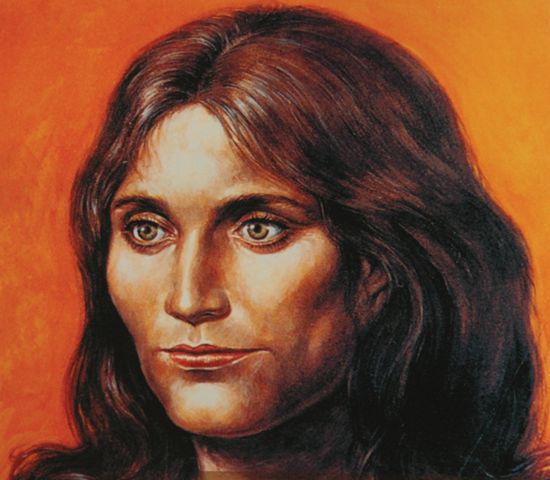 A reconstruction of the “Beauty of Loulan”

These discoveries sent archeological interest into overdrive; researchers from around the world, and across disciplines, came to have a crack at the mystery. The earliest expedition led by Victor Mair suggested that these Bronze Age inhabitants were a subgroup of Indo-Europeans of the (now extinct) Tocharian language branch, later joined by other Caucasians from the Eastern Mediterranean. Other studies using craniometry, textile comparisons, and DNA have suggested connections between the early or later settlers of the region with the Celts, Austria, or non-European civilizations of the Indus and Oxus river valleys.

What’s also still debated is whether these early people were migrants from west of the Central Asian steppes—or if Caucasians were, in fact, the indigenous people of this corner of Asia, an explanation which would surely add more fuel to the separatist movements brewing in the region today.

In 2015, researchers from Jilin University tentatively offered the most neutral (if least exciting) answer to this politically charged mystery: According to physical and DNA evidence, Loulan’s earliest inhabitants were Western Europeans from various points of origin, who later showed signs of intermixing with Asiatic populations from Siberia and Mongolia. It seems, the Belt and Road Initiative possibly had origins several millennia older than anyone had imagined. 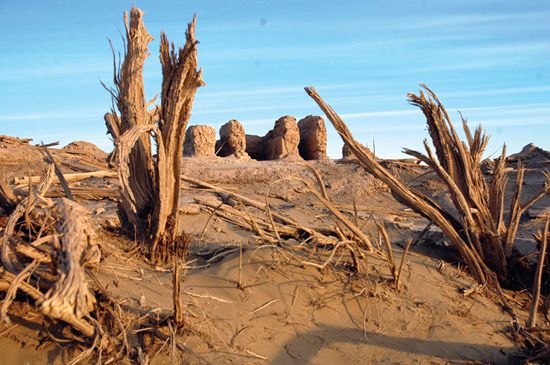 It’s hard to picture what Hedin, wandering in the desert over a century ago, would have made of all the squabbles. Claiming to be “no archaeologist,” he left the question to the experts and occupied himself with Loulan’s other great mystery—its disappearance. Tang dynasty (618 – 907) records stated that the city was frequently invaded by nomadic peoples and was relocated east to Qumul (Hami) in 630, where most of the silk trade had already been rerouted. Other theories posit irrigation failures, plague, or a cricket pestilence. None of these, though, explained why the lake, Lop Nor, had also vanished—an event which Hedin believed to be connected to Loulan’s decline and fall, as “the last drops of water disappeared after their hopeless struggle with the dunes.”

Widely ridiculed for his theory, which would require the Tarim River to almost completely reverse its course, Hedin was suddenly vindicated in 1921 when the Tarim changed course again, reverting to its original riverbed before explorers’ incredulous eyes. Revisiting the desert in 1936, Hedin took a joyful canoe trip to the restored Lop Nor, paddling down the same path he had traversed by camel 36 years ago.

In his memoir, Hedin described the enchantments of this “wandering lake”: “I felt myself in fairyland out on the waters of that lake sanctuary…ducks were swimming; gulls and other sea-birds uttered their cries of warning.” Here, finally, was the real desert “beauty,” an elusive attraction which held the power of life and death over civilizations.

Riddle of the Sands is a story from our issue, “Curiosities and Quests.” To read the entire issue, become a subscriber and receive the full magazine. Alternatively, you can purchase the digital version from the App Store.