An American artist in the Empress Dowager’s court

On August 5, 1903, American artist Katharine Carl arrived at the Summer Palace outside of Beijing to begin a most unusual assignment: Paint the portrait of one of the most famous—if not notorious—women in the world.

“I looked around, and saw a charming little lady with a brilliant smile,” Carl recounted in her book, With the Empress Dowager of China, writing she found it “impossible” to believe that her attractive host “could be the so-called cruel, implacable tyrant…whose name had been on the lips of the world since 1900!”

Following the debacle of the Boxer War and the military occupation of North China by an international expeditionary force, China’s imperial court was looking to improve its image abroad.

Sarah Pike Conger, the wife of the American minister to China, had formed a favorable impression of the Empress Dowager Cixi when the court received the ladies of the diplomatic quarter for tea, and raised the idea of an oil painting of the Qing ruler to be sent to the St. Louis Exposition.

“For many months I had been indignant over the horrible, unjust caricatures of Her Imperial Majesty in illustrated papers, and with a growing desire that the world might see her more as she really is,” Conger wrote in a letter to her daughter, mentioning she had apprised both Carl and the Empress Dowager of her idea.

Katharine Carl had arrived in China in the spring of 1903 to visit her brother Francis, who was working for the Qing Imperial Maritime Customs Service. She was not unknown to members of the Empress Dowager’s inner circle, having painted a portrait of Derling, one of the Empress Dowager’s ladies-in-waiting, in Paris. Carl, who had studied in Paris under Gustave-Claude-Etienne Courtois, had already completed several well-received portrait commissions including of Algerian royalty, and exhibited in the United States, Britain, and France.

Carl found the Empress Dowager to be a gracious and patient subject, although not with some particular ideas about how she should be portrayed. To make it more convenient for the multiple sittings necessary, the Empress Dowager invited Carl to live in a pavilion at the Summer Palace as her guest. “I had a curious feeling,” Conger wrote, “of being transported into a strange world.” 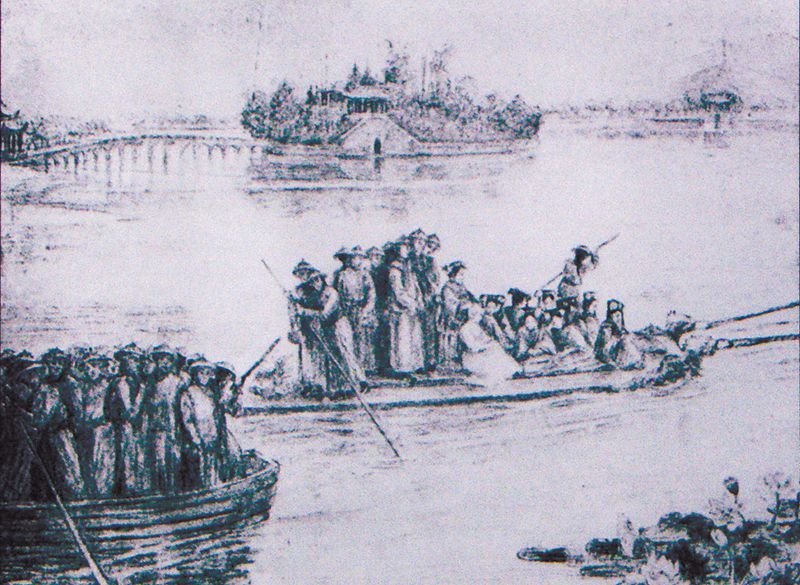 One of the main challenges for Carl was the intended size of the portrait. The Empress Dowager wanted it to be larger than life, and the finished painting would eventually be nearly three meters tall. At the Empress’ insistence, Carl began work with the larger canvas without smaller, preliminary sketches, and imperial carpenters had to produce oversized easels and special stretchers. Carl found herself working on a ladder to complete the upper portions of her painting.

Court protocol and precedent made Carl’s job difficult at times. There were issues of lighting in the cavernous halls of the imperial palaces. As the weather turned colder, the court relocated from the Summer Palace to the Forbidden City, then the Western Gardens of what is today’s Zhongnanhai. Carl and her massive—yet unfinished—portrait dutifully followed each move.

Carl also complained that officials were aghast if any shadows were added to what they called “The Sacred Image,” and they disliked the American artist’s attempts to add perspective and shading.

“When I saw I must represent Her Majesty in such a conventional way as to make her unusually attractive personality banal,” Carl wrote, “I had many a heartache and much inward rebellion before I settled down the inevitable.” Despite these obstacles, Carl met her deadline, and even drew several other sketches showing life in the Qing court during her nine months with the Empress Dowager.

On April 19, 1904, the portrait was unveiled first to the court and then to the women and men of the diplomatic community. It was fitted in a magnificent wooden frame and sent by special train to Shanghai to be readied for its transoceanic voyage. Every step along its journey, Chinese officials ensured the painting received nearly the same pomp, ceremony, and care as if it were the Empress Dowager herself making the trip abroad.

Two months later, the portrait had its public debut in St. Louis, and was a major draw. The New York Times, while commenting on the size of the portrait (“15 feet of imperial femininity”), noted that “the work is sure to attract a good deal of attention” even “if it takes a stepladder to fully grasp its technique and motive.” After the exposition closed, the painting was sent to the Chinese Legation in Washington DC, where it was given as a gift to US President Theodore Roosevelt. Today, the painting is in the collection of the National Portrait Gallery at the Smithsonian.

Following her time with Carl, the Empress Dowager embraced portraiture and even photography as a tool for shaping her image. Historian Ying-Chen Peng has argued that Cixi could be considered “a pioneer of the modernized representation of sovereignty in China.” The decision to let Carl paint the Empress Dowager’s portrait for an exhibition was a radical departure from imperial precedent, although it did little to change the fortunes of the empire.

Nevertheless, for a brief moment, an unlikely friendship between an artist and an empress opened a window into a world few had seen before.

Writing in 1913, after the death of the Empress Dowager in 1908 and the fall of the dynasty three years later, Carl still doggedly defended Cixi to the public. “I firmly believe her broad mind and real patriotism was capable of feeling, that the republic, brought about by the extraordinary revolution was what China needed to shake her from her long lethargy…however I cannot but rejoice that she was borne aloft in the Dragon Chariot before the revolution was accomplished!”

Illustration by Cai Tao and photograph by VCG

Painting the Buddha is a story from our issue, “You and AI.” To read the entire issue, become a subscriber and receive the full magazine. Alternatively, you can purchase the digital version from the App Store.